The EU has accused UK leadership hopeful Boris Johnson of fake news over his complaint that "Brussels bureaucrats" made life hard for smoked herring sellers. It emerged that the rules were made by the UK, and not the EU. 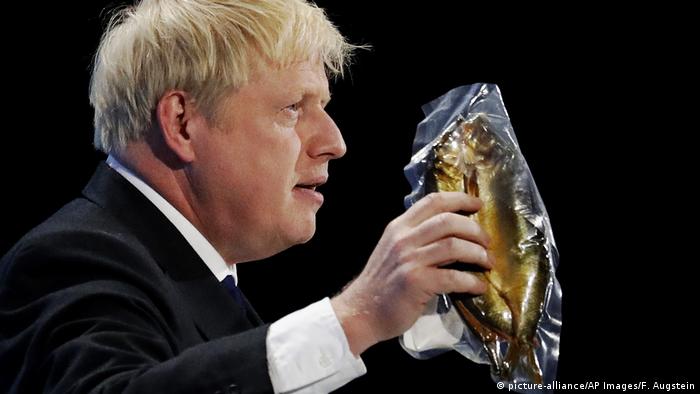 A claim that EU bureaucracy harms the UK's smoked fish trade was flatly rebuffed on Thursday, when the European Commission pointed out the rule was set by Britain.

In a last-ditch pitch to win votes in his bid to become Britain's next prime minister, leadership hopeful Boris Johnson took a swipe at EU health and safety rules. Holding aloft a kipper — a type of smoked herring beloved as a breakfast food by many Brits — Johnson railed against rules he attributed to Brussels.

Johnson — who has championed an uncompromising approach to Britain's exit from the EU — told a meeting of party members the fish had come from a "a kipper smoker in the Isle of Man who is utterly furious."

"After decades of sending kippers like this through the post, he has had his costs massively increased by Brussels bureaucrats, who have insisted that each kipper must be accompanied by this," he said, brandishing a "plastic ice pillow."

"Pointless, pointless, environmentally damaging 'health and safety,'" Johnson told Conservative Party members, upon whose vote he is relying to succeed Theresa May as UK prime minister.

However, Johnson's account was disputed by the European Commission, which stressed that the rules had been set by the UK.

"The case described by Mr. Johnson falls outside the scope of the EU legislation and it's purely a UK national competence," Anca Paduraru, the Commission's spokeswoman for health and food safety, told a press briefing on Thursday.

"There are strict rules when it comes to fresh fish but these kinds of rules don't apply to processed fishery products — I'm talking about the temperature and the exact case that he was explaining."

Meanwhile, EU Health Commissioner Vytenis Andriukatis accused Johnson of "fake news," pointing out that the Isle of Man, which lies between Britain and Ireland, is neither a part of the UK nor the EU.

The Isle of Man is a British crown dependency with access to the European single market, but is not part of the United Kingdom. Although it is outside the European Union, the island's businesses must comply with European regulations if they want to sell to the bloc.

Johnson was even picked up on his mistake by The Daily Telegraph, the newspaper that has strongly backed his campaign to become prime minister. The newspaper's Brussels correspondent — a post once occupied by Johnson himself — posted a thread of tweets methodically debunking the notion that EU bureaucracy was at fault.

It was also pointed out the packaging rule was regarded as useful in preventing listeria infections, a problem associated with smoked food. Kippers are whole fish, usually herring, which are split from head to tail, gutted, salted and smoked. EU rules on fish apply to fresh products rather than smoked ones.

Before entering politics, Johnson made his name as a journalist in the Belgian capital writing stories, that were often criticized as being untrue, about absurd EU regulations.

Johnson, who is favorite to win the leadership contest against his rival Jeremy Hunt, has pledged to leave the EU with or without a transition deal on October 31.

Police said they were called to the home of UK Conservative leadership contender Boris Johnson after neighbors reported a fracas. The news came as Johnson and rival Jeremy Hunt prepared to launch their runoff campaigns. (22.06.2019)

Ursula von der Leyen has tried to sway socialists and liberals on a possible Brexit delay. She also confirmed she'll step down as German defense minister, regardless of whether she is successful in her EC presidency bid. (15.07.2019)