Former UK premier John Major has said he would challenge in court any move to force through a "no-deal" Brexit by suspending parliament. Major warned it could drag Queen Elizabeth II into a "constitutional controversy." 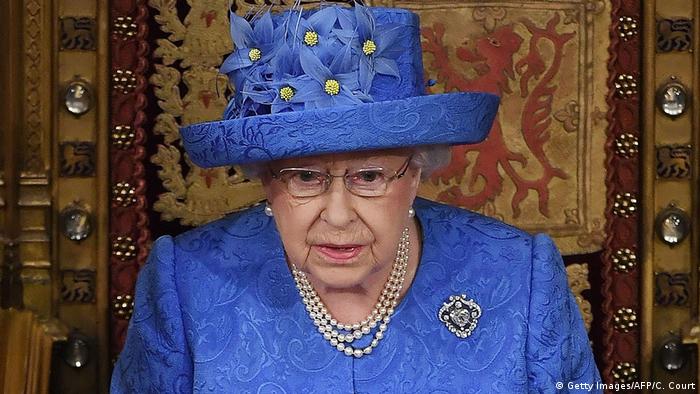 The former British Prime Minister John Major on Wednesday warned he would personally take legal action to stop any leader using a suspension of parliament to deliver a "no-deal" Brexit.

The intervention came after Boris Johnson refused to rule out a so-called prorogation of parliament — a move that Major warned would thrust Queen Elizabeth II into the center of a constitutional crisis.

"In order to close down parliament the prime minister would have to go to her Majesty the Queen and ask for her permission to prorogue" Major told BBC radio on Wednesday. "If her first minister asks for that permission, it is almost inconceivable that the queen will do anything other than grant it."

"She is then in the midst of a constitutional controversy that no serious politician should put the queen in the middle of," he said.

Major said he believed a "queue of people" would challenge any prorogation in court. "I for one would be prepared to go and seek judicial review."

Conservative leadership candidate Johnson has said Britain will leave the European Union on October 31, with or without agreeing a withdrawal deal with Brussels.

There is a majority in the UK parliament against leaving the EU without a withdrawal agreement.

Johnson said he wouldn't rule out suspending parliament while taking part in a television debate with rival Jeremy Hunt. "I'm not going to take anything off the table," said Johnson. "I think it would be absolutely bizarre at this stage in the negotiations for the UK, yet again, to be weakening its own position."

Some 160,000 Conservative party members are voting in a run-off to replace Prime Minister Theresa May, who resigned after she was unable to persuade parliamentarians to approve the Brexit withdrawal deal she negotiated with Brussels.

The economic impact of Brexit has been explored far and wide. But with the October 31 deadline approaching and a no-deal scenario still very much on the cards, could it affect women disproportionately? (26.06.2019)

Donald Trump has lashed out at Theresa May after the leak of diplomatic memos criticizing his presidency. The UK scrambled to stem the damage caused by the leaking of confidential memos, but Trump is not letting go. (09.07.2019)

US state capitals brace for pro-Trump demonstrations 53m ago