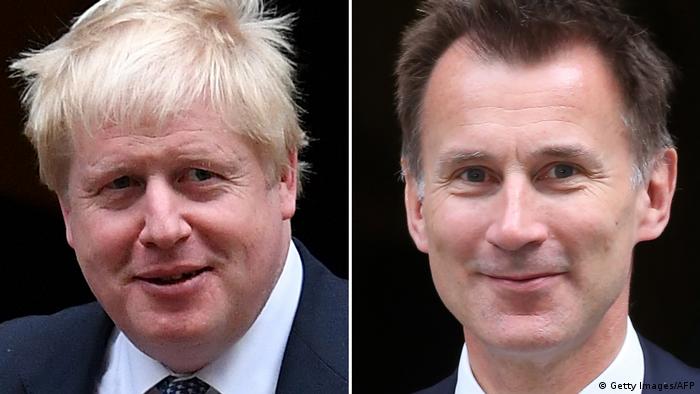 The race for Britain's next prime minister narrowed down to two candidates on Thursday, with former London Mayor Boris Johnson set to face off against Foreign Secretary Jeremy Hunt.

Johnson, who previously also served as foreign secretary, garnered the most support from Conservative MPs in their fifth and final round of voting, coming in at 160 votes. Hunt came in second with 77 votes, narrowly edging out Environment Secretary Michael Gove, who got 75 votes. Home Secretary Sajid Javid was also eliminated from the race earlier on Thursday.

"I look forward to getting out across the UK and to set out my plan to deliver Brexit, unite our country, and create a brighter future for all of us," Johnson wrote on Twitter following the vote.

Acknowledging the gap in support between himself and Johnson, Hunt tweeted: "I'm the underdog — but in politics, surprises happen, as they did today."

The winner will succeed Prime Minister Theresa May, who announced that she would step down from her post after failing to garner enough support from lawmakers for her Brexit deal with the European Union.

Johnson, a staunch Brexit supporter, has vowed to "deliver Brexit" by the current October 31 deadline — even without a deal in place.

Hunt, on the other hand, supported remaining in the EU during the 2016 referendum and is prepared to delay Brexit past the current deadline in order to renegotiate with the bloc and secure a deal.

Johnson emerged as the front-runner early on in the leadership race, increasing his share of Conservative lawmaker support throughout the candidate selection process.

It remains to be seen whether he can convince the governing party's grassroots members over the next few weeks. Hunt will likely press Johnson on his concrete plans for renegotiating the Brexit deal.

The European Union has repeatedly said it will not renegotiate the deal that it agreed with May, and British lawmakers have indicated they will attempt to block a no-deal Brexit scenario. It is unclear how the next prime minister will resolve these issues.

Boris Johnson has increased his lead in the race to succeed Theresa May as Britain's next prime minister. Rory Stewart has been eliminated from the contest. (19.06.2019)