British lawmakers have approved a bill that will oblige Theresa May to legislate against leaving the EU without a deal on April 12. May has been meeting with the opposition to find a way out of the Brexit impasse. 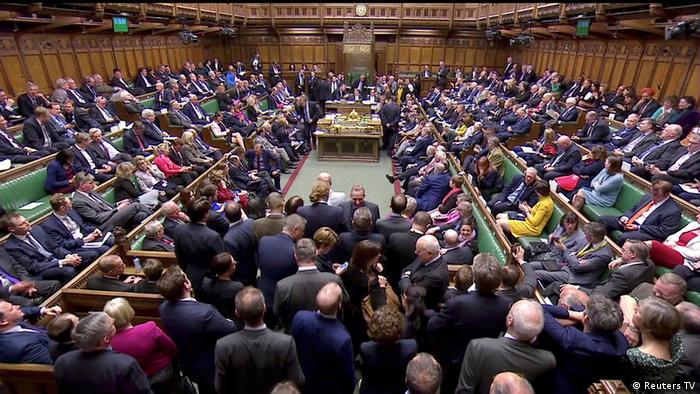 Members of Britain's Parliament have passed a motion to rule out the United Kingdom leaving the European Union without a withdrawal deal.

The bill, put forward by Labour lawmaker Yvette Cooper, would force Prime Minister Theresa May to ask the EU for an extension to stop a no-deal Brexit.

A spokesman for May said the government was "disappointed" with the outcome.

"The prime minister has already set out a clear process through which we can leave the European Union with a deal and we have already committed to seeking a further extension," he added.

The vote came after May met with the head of the opposition, Labour chief Jeremy Corbyn, to try to find a compromise deal for leaving the EU that would break the Brexit deadlock.

Read more: Tricks of the trade: Britain, the EU and doing deals in a post-Brexit world

Meanwhile, regional parties for Scotland and Wales, together with the Greens, Liberal Democrats and Independents, called for a second referendum on Brexit.

"Given everything we now know — and the detrimental impact Brexit will have on the UK's economy, job opportunities and people's livelihoods, the priority must be bringing the issue back to the people in a people’s vote — with the option to remain on the ballot paper," the joint statement from the Scottish National Party (SNP), Liberal Democrats, Independent Group, Plaid Cymru and the Greens stated.

Speaking to the European parliament on Wednesday, President of the European Commission Jean-Claude Juncker dismissed May's request for a Brexit extension until May 22.

"If it has not done so by then, no further short extension will be possible," Juncker said. "After April 12, we risk jeopardizing the European parliament elections, and so threaten the functioning of the European Union."

The EU has given the UK government until next week to come up with a plan. Failing that, it will crash out of the bloc on April 12 without a deal in place.

Bank of England governor Mark Carney said in a television interview on Wednesday that the wrangling in parliament meant the prospect of Britain crashing out of the EU without a deal was "alarmingly high."