UK pro-EU campaigners hold 'No to Boris' march in London

Anti-Brexit campaigners have marched through central London in a show of opposition to Britain's exit from the EU. Among the attractions was a giant balloon effigy of Britain's likely next prime minister, Boris Johnson. 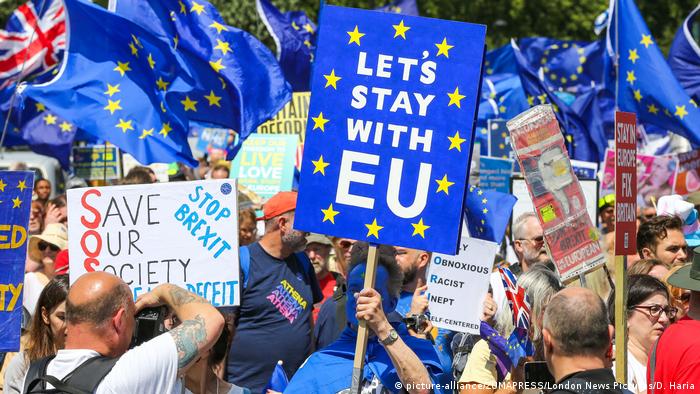 Thousands of people gathered in London on Saturday in a show of defiance to Brexit just days ahead of the selection of Britain's next prime minister.

The protest took place under the banner "No to Boris. Yes to Europe," with the route passing Buckingham Palace and ending outside the Houses of Parliament.

Demonstrators gathered in the city's Parliament Square, where organizers flew a giant balloon puppet of Johnson.

Britain's ruling Conservative Party is set to announce the successful candidate on Tuesday.

Both Johnson and his rival Jeremy Hunt have said they will take Britain out of the EU with or without any withdrawal agreement.

Organizers said the aim was to "make it clear to Boris Johnson that [they] want to stop the Brexit chaos."

"This is a national emergency. We won't put up with a hard Brexit PM being imposed on the country and hurtling us towards the cliff edge," the organizers said.

Amid a string of speeches was a performance from singer-songwriter and left-wing activist Billy Bragg. 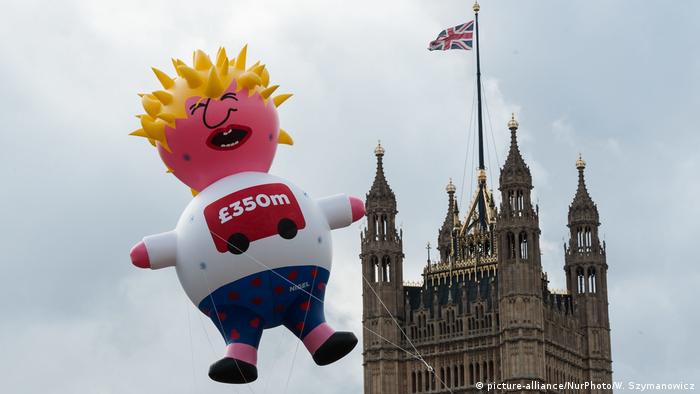 Organizers floated the Boris blimp in Parliament Square, where the protesters gathered for speeches

The effigy of Johnson included the politician's trademark disheveled hairstyle and a T-shirt featuring a bus and the message "£350m." The reference was to a claim made on the tour bus of Johnson's 2016 Vote Leave campaign. It said that Britain could save £350 million per week (€390 million, $440 million) and instead spend it on healthcare.

Johnson later backtracked on the claim, which was described as "misleading" by Britain's Office for National Statistics.

"The Boris Blimp might seem a bit of lighthearted fun but it carries a serious message," said Tom Brufatto, one of the protest organizers.

Some 160,000 Conservative Party members will decide on the successor to Prime Minister Theresa May, with both candidates having promised that Britain will leave the EU on October 31.

The UK government has been warned of a recession in the absence of a Brexit deal with the EU. Lawmakers have voted to block the path of any future Conservative leader trying to force through a no-deal exit. (18.07.2019)

Boris Johnson's ubiquity these days can be tiresome. But as a newspaper hack in Brussels he preferred to keep a low profile. Jim Gibbons recounts the many faces of the man who could be the UK's next prime minister. (20.07.2019)