The UK, responsible for a third of the world's €6 billion fine wine trade, could be "sleepwalking into a disaster" if regulations are not amended before January. Britain's fine wines association is worried. As things stand, the UK's status as the largest global trading hub for fine wines faces bureaucratic and financial burdens from a rollover of EU regulations for "third countries" when London ends its Brexit transition period at the end of this year.

"The UK wine industry is in danger of sleepwalking into what could be a disaster if it does not come together now to shout, lobby and force the government to rip up the current trading practices," said Michael Saunders, chairman of the Wine & Spirit Trade Association (WSTA). He described the regulations as a "waste of time."

"The introduction of a series of complex and expensive new ways of trading with the EU could result in a massive loss in business, and some sectors — noticeably fine wine — drying up completely due to the red tape and costs involved," Saunders said.

The UK is expected to lose access to the Excise Movement and Control System (EMCS) and operate under Customs Handling of Import and Export Freight (CHIEF) until a new Customs Declaration Service (CDS) is developed.

Instead of blaming the EU for the disruption, the WSTA called on London to "take ownership" and accept that it's "within its gift" to boost British business by abolishing the red tape. "It's down to you, don't blame the EU," WSTA CEO Miles Beale said, adding that the burden on small wine producers that often stock independent wine merchants is likely to be too great, and in some cases wine supplies from smaller vineyards into the UK are expected to wither. With fine wines crossing borders multiple times, the WSTA is concerned EU producers will look at the UK market and simply say why bother, he added.

Wine is big business in Britain

The UK makes up a whopping one-third of the world's €6 billion ($6.7 billion) fine wine global trade, a legacy of its extensive colonial and European wine trading networks.

The country exports around 650 million pounds (€740 million, $800 million) of wine a year, though only a small percentage of it is made in the UK, making the country a global wine hub, with some of the largest wine warehouses in the world where wine is shipped in bulk and bottled. Wine is the UK's sixth-largest food and drink export, with 20 million pounds worth of English wine and 600 million pounds worth of foreign wines. Liv-ex, a major wine trading-platform, says it sells more wine to the French that it buys from them.

The industry employs about 130,000 people working throughout the supply chain and as a whole is worth around 11 billion pounds to the UK economy. 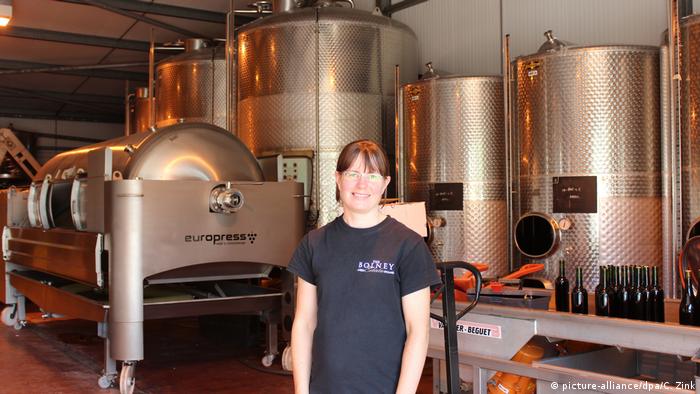 A British winegrower from the Bolney vineyard in the UK

James Miles, co-founder of Liv-ex, said the regulations required a laboratory test confirming the liquid in every batch of wine, no matter how small, coming to and from the EU. A bottle of Petrus, for example, would have to be opened and tested from every shipment, making the secondary market impractical.

Costly and time-consuming 330-pound VI-1 forms, designed to cover third-country shipments and required for each wine within a mixed shipment, are predicted to add at least 70 million pounds to the industry, the WSTA said.

The WSTa also warned that the loss of access to the EMCS system (which simplifies the movement of goods) would also triple the amount of work and bureaucracy in movement of wines, adding more cost and time to shipments, while the new global tariffs would also add extra work and further costs. Other burdens, such as relabeling requirements, were also highlighted. The association said many of the additional costs of trade— which the UK government currently says would sit with producers — would be passed on to UK importers and the consumers, and at a time when the challenges of recovery from the pandemic will still be pressing hard.

The WSTA recommends that the UK join the World Wine Trade Group and introduce zero tariffs and is asking the government to simplify import and export requirements, including the abolition of VI-1 import certifications. The WSTA said the UK needs an implementation period from January 1, 2021, and said it was asking the government not to introduce VI-1s; instead it should suspend arrangements pending a review of the need for import certification.

Do a Hong Kong

Both Liv-ex and the WSTA said the UK should take inspiration from measures used in Hong Kong, which has become a major player in the fine wines sector. This is actually a "once in a lifetime" opportunity, said Miles, to help the UK sector become an even stronger global fine wines hub. Or, in his words, "do a Hong Kong."

Some 170 million pounds worth of the 650 million pounds that the UK exports in fine wine annually goes to Hong Kong. That sum could either be eviscerated or enhanced depending on how the government exits the UK. Britain risked falling way behind Hong Kong as the world's leading hub for fine wine trading, warned Miles.

The big worry for the UK wine industry is that the government is currently not listening to its fears, said Beale. "We're being completely overlooked."

The government's wines team in the Department for Environment, Food and Rural Affairs (Defra) was reportedly aware of the issues and said that negotiations were ongoing. But, as Beale said, Victoria Prentis, Under Secretary of State for Defra, gave an "astonishingly ill-informed reply claiming it would be nil or negligible..

It appears that the government has decided to use VI-1 certification as some sort of bargaining chip in a trade deal, but instead of holding the EU to ransom they are in fact costing British business millions of pounds."