A second-string Germany were on course for victory over Spain after Timo Werner's strike early in the second half in Stuttgart. But the hosts were denied in the 96th minute when Jose Gaya earned Spain a point. 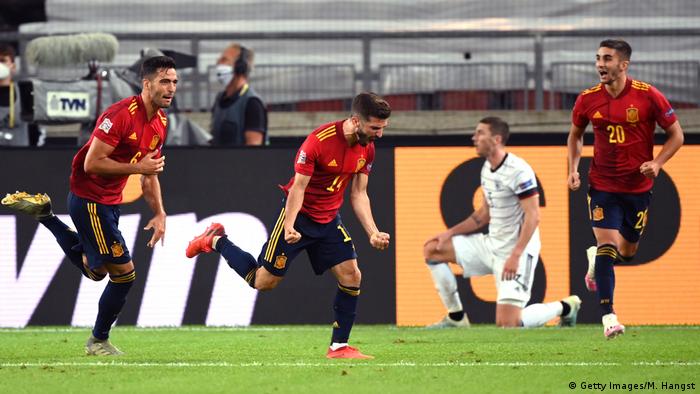 Spain scored a late, late equalizer to hold Germany to a 1-1 draw in the Nations League as international football returned for the first time in 2020.

Joachim Löw's team looked to have got their Group 4 campaign off to a winning start following Timo Werner's strike just after half-time. But when Ferran Torres floated one last cross into the box in injury time, Germany failed to clear. Rodrigo Moreno won the header and Jose Gaya nodded home to rescue a point for Spain.

As disappointing as the finale was from a German point of view, a draw was a fair result overall after 96 minutes in which both teams created chances. But it was Werner, returning to his home town of Stuttgart after his move to Chelsea this summer, who opened the scoring after impressive work by debutant Robin Gosens.

The Atalanta full-back, who scored ten goals and assisted eight more last season as the Serie A side reached the Champions League quarterfinals, advanced down the left and cut back to Werner. The former Stuttgart and RB Leipzig striker, who scored his first goal for Chelsea in a friendly against Brighton at the weekend, controlled neatly and shimmied into space before firing low and hard past David de Gea. 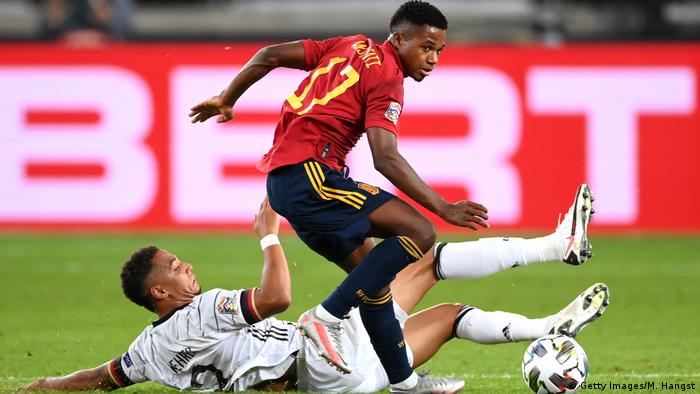 17-year-old Ansu Fati caused Germany problems when he came on.

The Spanish goalkeeper, coming off the back of a mixed season with Manchester United, had kept the game goalless in the first half, saving spectacularly from Leroy Sané. He later tipped a Niklas Süle header over the bar, but he had no chance with Werner's shot.

Rodrigo continued to pose the biggest threat for the visitors, firing a venomous effort just wide before the hour mark, while half-time substitute Ansu Fati also injected pace and directness to Spain's attacks. The 17-year-old Barcelona forward is the youngest player to represent Spain since 1936.

He had the ball in the net himself in injury time, but his header was ruled out after his teammate Sergio Ramos – twice his age – committed a foul in the build-up. But there was nothing to save Germany when Gaya headed home at the last.

FT Germany 1-1 Spain — It's all over! Spain have earned a point with virtually the last kick of the game. the equalizer had been coming for 20 minutes or so, and that's a lesson for Germany in closing out games. It ends all square in Stuttgart.

90'+6 GOAL! Germany 1-1 Spain — It's last gasp equalizer for Spain! Gaya turns the ball into the net from close range. Germany have let this one get away.

93' Spain pushing for an equaliser but they're running out of time fast.

90' Fati heads in but has his second goal chalked off, this time for a foul by Ramos. The Spain captain impedes Ginter as the ball comes in, but the ref was quick to whistle. 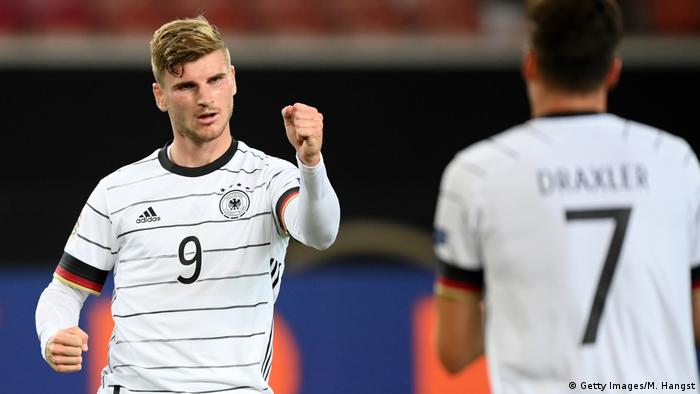 Werner's strike was his 12th in 30 games for Germany.

86' Rüdiger throws himself at Kroos's corner but can't keep his header down.

83' Fati drives into the box and attempts to cut the ball back, but Süle is there is clear for a corner. Fati has introduced some pace and directness to Spain's play, which was sorely missing before he came on.

77' Close for Germany! Süle's header is a very good one which is dropping under the bar, but De Gea springs off his line and tips it over. Great reactions by the Manchester United keeper.

74' Germany sub. Serdar on, Gündogan off.

72' Fati puts the ball in the net but Carvajal is flagged offside in the build up. The Real Madrid man was way off.

62' Chance for Germany as Sane gets into a good position again but his cross forces Werner too wide and the Chelsea man can only slam his shot into the side-netting.

59' Fati gets into a great position but his throughball is very poor. Spain have got into good areas tonight but haven't been able to convert those openings into proper chances. Final ball poor.

56' Rodrigo has a pop from distance and it's not a bad effort by the new Leeds striker, but Trapp knew it was going over.

53' Almost a quick second for Germany as Sane goes clean through but he can't sort out his feet and Thiago gets back to make an important block.

51' GOAL! Germany 1-0 Spain — Werner scores! Germany make the breakthrough and it's a goal created by the debutant Gosens. His run and cross finds Werner, who gets the ball out of his feet and drills it into the bottom corner.

46' SECOND HALF — We're back underway. One change for Spain, with Fati replacing Navas.

45' HT Germany 0-0 Spain — Not a classic in Stuttgart. A somewhat lethargic game but Germany have shaded it so far. Spain have ahad a couple of chances too though, and both sides just need to show better finishing to force the opening goal. Goalless t the break.

42' Thiago orchestrates a fine move but his cross from the left is hooked away by Süle.

39' Promising move by Germany but Sane's final ball is poor again. Should have used his right foot, but he doesn't have one, and his outside-of-the-left-foot attempt to thread the ball through to Werner was pitiful.

36' Werner drives at Sergio Ramos and goes for goal with an early shot, but it sails way over.

33' The pace of the game is noticeably slower than recent club games. Both sets of players seem to just want to get through it without getting injured.

30' A glimpse of goal for Sane, but Pau Torres spots the danger and gets across to deny the new Bayern man.

26' Gaya forces Spain's first corner, which Thiago whips in, but Germany hack it out. Spain just starting to grow into the game.

23' First chance for Spain and a first save for Trapp. Thiago's floated free kick is nodded back to Busquets by Pau Torres, but the shot is straight at Trapp, who gathers.

22' Germany enjoying the best of the game at the moment though. Spain defending quite deep and struggling to create anything.

20' Promising break for Germany but Sane just puts too much on his through ball to Gosens, and the Atalanta man is forced to check back and the move breaks down.

18' Sane forces another save out of De Gea, this time a more acrobatic stop to the Spaniard keeper's right.

15' Germany almost score at the other end, but Draxler's shot on the slide is saved again by De Gea at his near post.

14' Ooh, Germany get lucky here. Specifically Trapp. The Eintracht Frankfurt keeper comes out of his box to clear but gets it all wrong and it drops to Rodrigo, but Trapp gets back to make an unceremonious challenge on the edge of the box as Rodrigo is about to pull the trigger.

11' First chance of the game and it falls to Kehrer, who is picked out by Kroos but the PSG man sees his header blocked at the near post by De Gea, who had to be alert.

9' Werner is flagged offside but he was level. Although he hit his shot at De gea anyway.

6' Very little quality so far, and also very little to talk about.

3' Neither seem settling in the early stages. Quite a few misplaced passes and wayward punts.

20.40 The players are out, the anthems are done. Lets play some football.

20:10 Robin Gosens makes his long-awaited Germany debut — more about that here— as Toni Kroos captains the side. Bayern Munich and RB Leipzig's Champions League players are given a rest, with the exception of Niklas Süle, who starts, as well as new Bayern signing Leroy Sane. There's no rest for Thilo Kehrer though, who starts in Stuttgart just 11 days after playing in a Champions League final for PSG.

Were it not for the UEFA Nations League restructuring, Germany would have been relegated in the inaugural season after finishing bottom of League A Group 1 and without a win to their name.

Following on from the disappointment of the 2018 World Cup, Germany started with a promising goalless draw against France. However, two defeats in the space of three days in October - 3-0 vs Netherlands and 2-1 vs France – only heaped more misery on a sidestill struggling to transition.

The campaign took further gloss of Germany's reputation and led to questions being asked of head coach Joachim Löw. Those questions still haven't been answered and, as a result, redemption will be on the mind during the 2020/21 campaign.

From the coaches' mouth: Joachim Löw

"We are delighted to have our team back out on the pitch. The past few months have been difficult for everyone. I want to go into the tournament with a confident side, who don't orientate themselves based on opponents, but brings their own game to the pitch."

From the coaches' mouth: Luis Enrique

"If the European Championship were to be played tomorrow, this would be my team. All players have to take a step forward, whether they are 17 years old or 19 years old or 33 years old. Our aim at the EUROs next year is to win the title."

Löw has called up three first-timers in his 23-man squad. Oliver Baumann has been rewarded for years of hard graft at Freiburg and Hoffenheim and "brings 10 years worth of consistent performances" according to Löw.

Gladbach's Florian Neuhaus, described as an "intelligent player" by Löw, is the latest to make the step up from the Under-21s, while Robin Gosens could make his debut at left-back on Thursday after "a very strong season" with Serie A side Atalanta.

From the player's mouth: Robin Gosens

"The EUROs are still a while away. I'm want to savor the moment and make my first impression count. What speaks for me is my whole package. I have a lot of qualities to make an impact on the left flank both in an attacking and defensive sense."

Havertz's impeding transfer to Chelsea is becoming somewhat of a running gag, but it will likely impact his role against Spain and Switzerland. Even though he has reportedly completed his medical, Löw is unlikely to let the 21-year-old complete the full 90 in either game.

Germany boast nine wins to Spain's seven in 23 previous encounters. The most recent meeting saw Thomas Müller score for what could be the last time as a member of Die Nationalelf as his goal before half-time cancelled out Rodrigo's earlier effort in a 1-1 draw in Düsseldorf.

After disappointing in the inaugural season, Germany are out to redeem themselves in the UEFA Nations League. Joachim Löw and Co. kick-off their 2020/21 campaign against Spain. Follow all the build-up in DW’s blog.