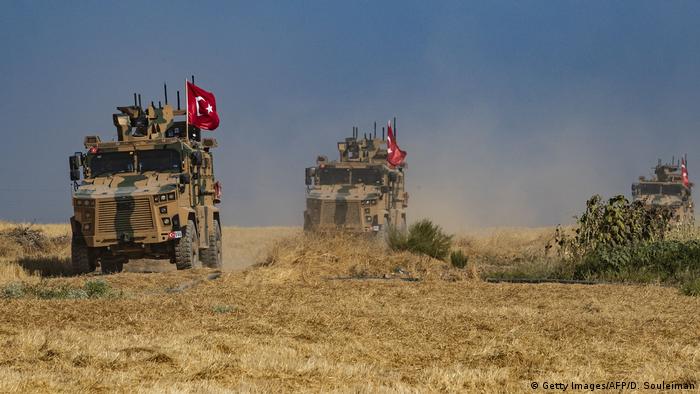 How is Turkey justifying its military deployment in Libya?

Turkey has been in an economic crisis since the summer of 2018, so why would the government want to take on another expensive military deployment abroad? The country already has troops in northern Syria, and speculation is rife at home as to the motivation for this latest move.

According to Turkish President Recep Tayyip Erdogan's own words, the primary reason for Turkey's involvement is the need to defend Libya's legitimately elected government from the "warlord" Khalifa Haftar. Ankara says it is acting on the invitation for military co-operation put forth in November by Fayez al-Sarraj, who leads the Government of National Accord (GNA). Yet, it is clear that there is much more on the table for Erdogan.

What does Turkey hope to achieve?

Currently, the Turkish president's popularity is in free-fall. Turkey's currency and economic crises have eroded his support among the populous. In municipal elections in March 2019, he suffered humiliating defeats in a number of major Turkish cities. The defeats were the first of his long and successful political career.

Erdogan is using a well-worn gimmick to halt that trend: He is appealing to nationalist sentiments among the Turkish population. Presenting the Turkish government as a powerful regional player scores him points with a portion of the population, especially those who are religious and conservative. Erdogan waxes poetic when speaking to the public, noting that Kemal Mustafa Ataturk himself, the founder of modern Turkey, fought in Libya during the final days of the Ottoman Empire.

The fact that military operations in northern Syria and Libya are taking place in what was the former empire's territories has awakened dreams of past grandeur among some Erdogan supporters. It is also suspected that Erdogan intends to hold Turkey's presidential election — scheduled for 2023 — this year. And by employing nationalist rhetoric, he is seeking to line up supporters behind him.

What does the military deployment in Libya have to do with gas reserves in the eastern Mediterranean?

Turkey is also pursuing economic interests with its military engagement. The agreement that Erdogan signed with al-Sarraj in November encompassed more than just military co-operation. Another point that was agreed to in Tripoli had to do with international maritime borders that were redrawn to Ankara's advantage. This will theoretically enable Turkey to access massive gas reserves discovered off the southern coast of Cyprus about 10 years ago.

But the find has also become a bone of contention, as the third-largest island in the Mediterranean has been split into a Turkish (northern) and a Greek (southern) half since 1974, with both sides claiming sovereignty over the valuable gas reserves.

The Republic of Cyprus — the Greek part of the island — has cited maritime law, which guarantees every country an exclusive economic zone extending 200 nautical miles from shore, to bolster its claims. All natural resources found in this area belong to the country in possession of the shoreline, and that country has the right to exploit those resources economically. But in the case of Cyprus, the issue is a bit more complicated, because Ankara claims that the Turkish Republic of Northern Cyprus is also a sovereign state with all the rights that go with that distinction — including its own exclusive economic zone.

The international community, however, does not recognize the Turkish Republic of Northern Cyprus as a sovereign state. That has led other countries in the region to ignore Turkey's claims to the gas reserves off Cyprus. Coincidentally, on the same day the Turkish parliament approved the deployment of its army, Israel, Cyprus and Greece signed an agreement to push forward with the EastMed pipeline project. The 1,900-kilometer-long (1,180-mile-long) pipeline is intended to transport gas from Israel and Cyprus to Greece and other European countries, such as Italy. Ankara was never invited to participate in negotiations over the project. Turkey's agreement with Libya is designed to deliver Ankara from its isolated role among its Mediterranean neighbors.

What role is Russia playing in all of this?

In late October, Russian President Vladimir Putin met with Erdogan in Sochi, where the two agreed to a conclusion of Turkish military operations in northern Syria, ending most fighting in the area. As was the case in Syria, Russia also plays an important role in Libya. Yet, Moscow supports the other side in Libya's ongoing civil war — that of the renegade General Haftar. On January 8, Putin and Erdogan will meet again, and both leaders will have the opportunity to speak about Libya and outline new parameters for how each will proceed there.