The foreign minister has accused Berlin of not understanding the coup's impact on Turkey. In a statement given to DW, jailed journalist Deniz Yücel took a jab at him for being "unhappy" over the lack of an indictment. 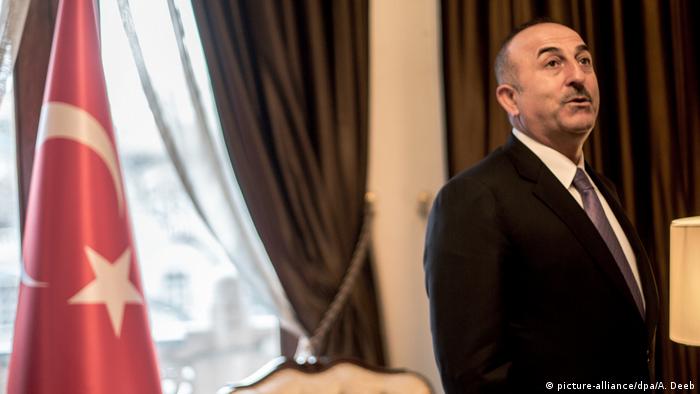 Turkish Foreign Minister Mevlut Cavusoglu called for a "fresh start" with Germany after relations between the military allies took a nosedive in the wake of Turkey's mass crackdown on civil society in 2016.

Both countries should come together "as equal partners" and show more empathy towards each other instead of engaging in "megaphone diplomacy," Cavusoglu said in an op-ed written for German publishing group Funke Mediengruppe in an apparent reference to critical statements made by German officials.

The Turkish foreign minister said Germany did "not fully understand" the "trauma" sustained by his country during the failed coup in July 2016. Turkey expects Germany to "better understand the situation that the Anatolian country is currently facing," he said in the op-ed.

Since the failed coup that left more than 240 people dead, Turkey has detained at least 50,000 people and suspended 150,000 more from work for suspected links to Fethullah Gulen, a self-exiled Turkish cleric. Turkish authorities have also targeted German citizens, including journalists Deniz Yücel and Mesale Tolu.

Cavusoglu's op-ed echoed similar statements he made earlier this week, during which he brought up the case of Yücel of the Berlin-based Die Welt newspaper.

In an interview with Germany's DPA news agency, the foreign minister said that while Yücel had yet to be formally indicted, the government has encouraged "the judiciary to speed up the process."

In a statement laced with irony in Turkish and German given to DW and the dpa news agency by his lawyer, Yücel said that he did not want Cavusoglu to feel "unhappy" over the indictment, referring to the minister's comments earlier in the week.

"That really worried me. After all, I do not want him to be unhappy because of me. But I can comfort him: If I've been accustomed to being held hostage without charge for almost a year, then he can manage as well," Yücel said.

Yücel also wrote that he was pleased to hear the foreign minister call his case "very complex," adding that he was glad at least the government was able to study the case as the secrecy surrounding it has prevented him and his lawyer evaluating the arguments to be made against him.

Earlier this week, the Turkish government submitted its comments to Turkey's constitutional court on Yücel's pre-trial detention. The country's top court said Yücel has two weeks to offer his response before it determines how to move forward, which could include letting the journalist go free. He has been held for 10 months.

'My husband loves his work': Dilek Yücel speaks to DW about jailed husband