Last week, 13 Turkish citizens were killed in northern Iraq during military operations against the Kurdistan Workers' Party (PKK). Turkey says it's a terror organization and is using it to malign opposition politicians. 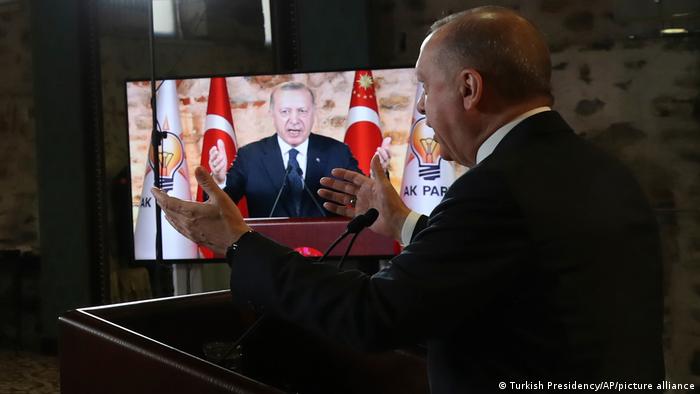 Though the circumstances of a botched military operation that killed 13 people is unclear, Erdogan has gone on the offensive

The circumstances that led to the deaths of 13 Turkish citizens in the Gara region of northern Iraq are unclear. According to the Turkish government, they were each executed with a shot to the head by PKK operatives, but the Kurdish militant group says they died in bombings conducted by the Turkish air force. Turkish President Recep Tayyip Erdogan said the army had been trying to free kidnapped citizens. "We didn't succeed," he said.

The citizens were Turkish civil servants, including police and soldiers, whom the PKK kidnapped in southeastern Turkey in 2015 and 2016, and then took to northern Iraq to be held hostage.

Lots of kidnappings after government broke off peace talks

The PKK has kidnapped a number of Turkish citizens since Erdogan put an end to Turkey's peace talks with Kurdish militants in 2015. Still, the issue has not received a great deal of public attention. Opposition politicians and human rights organizations have criticized the government's lack of transparency on the hostage-takings.

According to the Turkish non-governmental organization (NGO) Human Rights Association (IHD), none of the 13 hostages' families received any news about the whereabouts or well-being of their loved ones for years. They turned to politicians and NGOs to find out more about the kidnappings — to no avail. IHD head Ozturk Turkdogan told DW: "All attempts to make contact failed. The state simply did not want to communicate."

Murat Bakan, Izmir deputy of the main opposition Republican People's Party (CHP), told DW the government had repeatedly ignored his parliamentary questions. He said that several families had complained about the state's indifference and lack of effort. "Even though I kept bringing the situation of the families — their cries for help — to the attention of parliament, no action was ever taken."

The CHP has blamed Erdogan and his ruling Justice and Development Party (AKP) for the deaths of the 13 Turks found in northern Iraq. CHP leader Kemal Kilicdaroglu recently attracted a lot of attention with a parliamentary speech accusing the president of doing too little to rescue the hostages. He said Erdogan could have ended the situation by negotiating with PKK leader Abdullah Ocalan or with US President Donald Trump — with whom he had a good relationship.

Kilicdaroglu added that Erdogan could have worked with human rights organizations to push for the hostages' release. He also asked why the military operation in northern Iraq — which led to the deaths — had failed.

Erdogan refused to answer the questions, citing Kilicdaroglu's "bad manners." Speaking after a cabinet meeting, Erdogan said Kilicdaroglu "had obtained the presidency of the CHP through force and fraud" and called him out for refusing to admit that the PKK is a "despicable terrorist organization."

Turkish President Erdogan thinks US should stand with Turkey, not "with the terrorists"

This week was also witness to another curious scene related to the hostages. During a speech delivered at an AKP party congress in the Black Sea city of Rize, Erdogan's home district, the president suddenly pulled out his phone and called the mother of one of the dead hostages. He told her she would be honored because her son was now a martyr, who, "God willing, had become a neighbor of our beloved Prophet." He then promised to avenge her son.

The opposition criticized the phone call and chastised the president for again finding a pretext — in this case, the deaths of 13 citizens — to stir nationalist sentiments to serve his own agenda. Erdogan is often accused of using nationalist rhetoric to distract from the real problems Turkey faces — for instance, its grim economic situation and myriad failures in the fight against COVID-19.

Erdogan criticized the pro-Kurdish HDP, accusing it of being "official terrorist accomplices." He went on to say, "A party that does not define the PKK as a terrorist organization and does not distance itself from it cannot be a political party in this country."

The president's tirade was preceded by the arrest of 718 people — including provincial and district HDP leaders — over the incident in Gara. According to the Turkish Ministry of the Interior Affairs, those arrested are accused of having connections to the PKK — a frequent allegation often backed by little or no evidence.

"The allegations and attacks on the HDP are an attempted lynching and part of a political campaign," deputy HDP leader Saruhan Oluc told DW: "We reject it."

Some political observers believe the Turkish government is trying to criminalize the party gradually in order to justify an outright ban later. The left-leaning party is the country's second-largest opposition party and has recently tipped the scales of elections.

If the HDP were to clear the 10% hurdle in the 2023 presidential and parliamentary elections, it could be difficult for Erdogan's conservative Islamic AKP to win a majority, as its popularity has been on the wane in recent months.