Ankara says it has deployed special forces against Kurdish rebels in Iraq after alleged attacks on military outposts. It is Turkey's first known air-and-land offensive in Iraq. 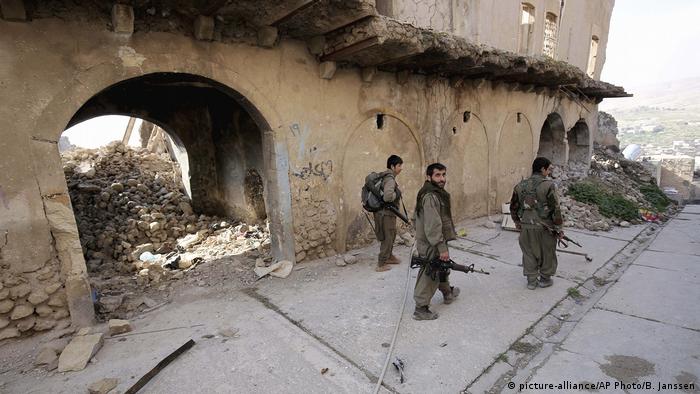 Turkey's Defense Ministry said Wednesday that it had launched a military operation against Kurdish rebels in northern Iraq, after carrying out a series of airstrikes.

"Our heroic commandos are in Haftanin," the ministry said in a statement on Twitter, referring to the border region some 15 kilometers (9 miles) from the Turkey-Iraq border. The latest development in "Operation Claw-Tiger" was launched following intense military fire, the statement said.

The ministry said the commando forces operation was supported by warplanes, attack helicopters, and artillery as well as armed and unarmed drones.

It did not say how many troops were involved.

The operation followed "increasing harassment and attempts to attack" military bases in Turkey near the border, the ministry said. It would continue to target the Kurdistan Workers Party (PKK) and other "terror" groups in the region, it said, but did not provide further names.

Turkey's military regularly carries out attacks by air or ground against the PKK in Iraq, which it considers a terrorist organization.

Wednesday's operation was the first known airborne and land offensive.

Turkey: Refugees at the mercy of politicians

The offensive was the second installment in the Operation Claw-Eagle saga, occurring just days after Turkey carried out an air operation in the area. On Monday, the defense ministry said it had hit suspected PKK targets in the Qandil mountains near the Iranian border as well as several other locations.

"Turkey continues its fight against terrorists using the rights based on international law," said Omer Celik, the deputy chairman of President Recep Tayyip Erdogan's ruling party. "It is our most natural right and duty to fight terrorists who attack our borders, citizens, and security forces."

The government of Iraq summoned the Turkish ambassador on Tuesday to protest the initial aerial offensive. Baghdad called the airstrikes a violation of its sovereignty and said it broke international law.

There was no immediate response from the PKK or from northern Iraq's semi-autonomous Kurdish region.

Tens of thousands of people have died in the decadeslong conflict between Turkey and the PKK, primarily in the Kurdish southeast region.