Turkey is expanding its ground offensive. Turkey's push into Syria was announced to push back the self-styled "Islamic State" but also appear intent on blocking Kurdish gains. 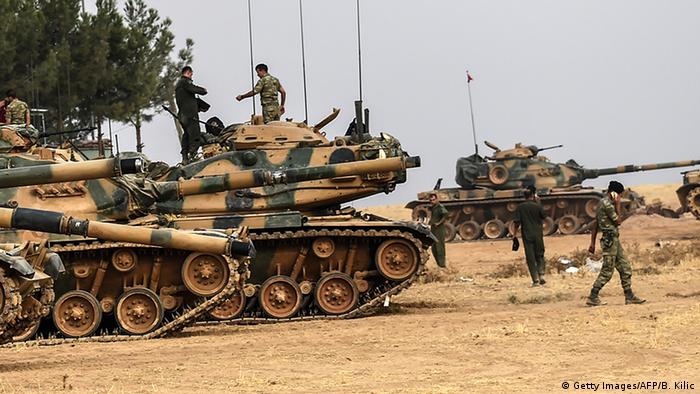 Turkey's military continued to shell US-backed Kurdish militia in northern Syria as it drove more tanks into the country Friday, highlighting the complicated nature of Turkey's "Euphrates Shield" incursion it says will secure its borders from the so-called "Islamic State" (IS) and rival Kurdish forces.

A fresh contingent of Turkish tanks has arrived in the small border town of Jarablus, a day after Turkish troops - backed by allied Syrian rebels - captured the town vacated by IS with hardly a shot fired.

Turkish Defense Minister Fikri Isik warned the Kurdish People's Protection Units (YPG) militia - which Turkey views as the Syrian branch of Kurdish insurgents in Turkey - to move back east across the Euphrates or face destruction.

"If this withdrawal doesn't happen, Turkey has every right to intervene," Isik said. "Turkey will be following, moment by moment."

Turkey's openly hostile stance against the YPG has been a thorny issue with the US-led anti-IS coalition which has relied on YPG fighters on the ground to coordinate its strikes against the jihadists in Syria.

Ankara's incursion into northern Syria to seize the border town of Jarabulus from Islamic State is being held up by Turkish officials, but critics question the government's motives. Tom Stevenson reports from Istanbul. (25.08.2016)

At least eight police officers have been killed and more than 45 people wounded in a bomb attack in the southeastern city of Cizre, state media says. Images from the scene show damage to a riot police headquarters. (26.08.2016)

Kerry arrives in Geneva to talk Syria with Russian counterpart

John Kerry plans to meet with Russia's top diplomat to discuss the ongoing war in Syria. The meeting comes after the US Secretary of State announced a new peace push for war-torn Yemen. (26.08.2016)

Biden: US had no prior knowledge of Turkey coup

US Vice President Jo Biden has told Turkey's leaders that Washington had not supported the failed July 15 coup. He says the US is evaluating the evidence against alleged plot mastermind Fethullah Gulen. (24.08.2016)

Perhaps seeking to placate Turkey, US Vice President Joe Biden said during a Wednesday visit to Ankara, that the YPG had been instructed to remain east of the Euphrates River or lose US military support.

But Turkey soon accused the Kurdish militia of violating those terms and an artillery barrage fired from Turkish soil "eliminated" a group of fighters it said had been advancing north from the city of Manbij, Turkey's state-run Anadolu news agency reported Thursday.

US Secretary of State John Kerry reportedly told his Turkish counterpart in a Thursday phone call that Kurdish militia had been retreating as Turkey demanded, Turkish foreign ministry sources in Ankara told the Reuters news agency, illustrating the difficulties in the two NATO allies have in juggling their divergent interests in Syria.

Profound disagreement over a counterrorism strategy in Syria is just one of two major sticking points in deteriorarting relations between the two NATO countries, analysts say.

"Turkey and the US have very serious differences about what is happening in Syria," Gareth Jenkins, an Istanbul-based scholar with the Silk Road Studies Program at Johns Hopkins University told Deutsche Welle.

That's because the US refuses to extradite Islamic cleric Fethullah Gulen without a evidentiary hearing despite Turkish President Recep Tayyip Erdogan insistence that the elderly preacher was behind the July 15 failed coup attempt.

"The US is not going to extradite Fethullah Gulen, who the Turkish government accuses of being behind the coup attempt," Gareth said, "and the US cannot abandon the PYD not least because it doesn't have another credible partner to work with in Syria. So for these two reasons I think the tensions in Turkish-US relations are going to remain for the foreseeable future."

Saleh Muslim, head of the Kurdish umbrella group in Syria, warned Wednesday that Turkey was entering a "quagmire" in Syria and faced defeat there like IS. The Syrian government in Damascus also complained the incursion violated its sovereignty. 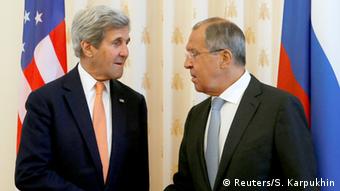 US Secretary of State John Kerry is due to meet his Russian counterpart Sergei Lavrov in Geneva Friday for talks expected to focus heavily on the situation in Syria.

Kerry is meeting his Russian counterpart in Geneva on Friday afternoon. Russia's air force has been waging a devastating aerial campaign against Syrian rebels - including IS - but also targeting militia backed by Turkey.

Expectations are running high that a deal between Moscow and Washington on a joint strategy to fight Islamist extremists in Syria could lead to a cessation of hostilities. The thinking among diplomats is that could lead to re-launching talks on a political transition to end the five-year Syrian conflict.

But US officials said early Friday that it's too early to say whether an agreement was likely. "There are still issues that need to be ironed out," a senior State Department official told Reuters as the talks began at a luxury Swiss hotel.