Turkey′s ′sea snot′ is part of a growing environmental threat | Environment | All topics from climate change to conservation | DW | 08.06.2021 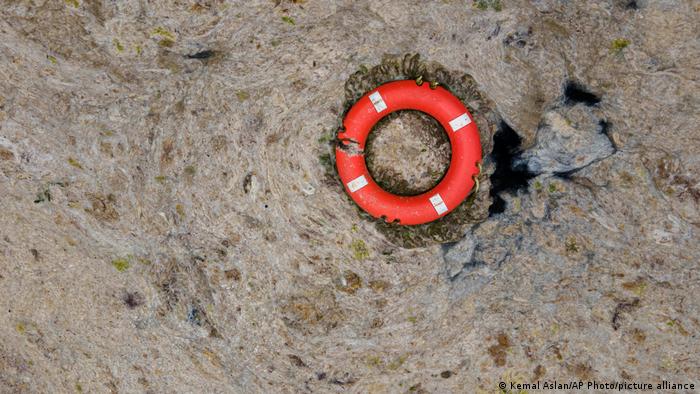 Over the last six months, a huge mass of organic matter has bloomed over the surface of Turkey's Marmara Sea, south of Istanbul, boosted by global heating and an overload of pollutants including wastewater and pesticides.

The thick, slimy gray-brown sheets, known as marine mucilage, are made up of dead and living organic material, much of it phytoplankton. These microscopic algae usually help fill the ocean waters with oxygen, but when stressed they can grow out of control and produce a sticky mucus-like substance that can span many square kilometers. 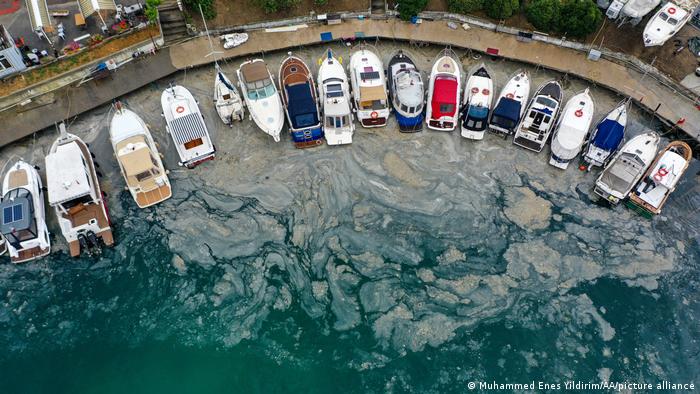 The sea snot has been a problem in the Marmara Sea since 2007, but never before to this extent. For the past week, researchers from the Institute of Marine Sciences at Turkey's Middle East Technical University (METU) have been studying the phenomenon from aboard a research vessel, checking 100 stations throughout the entire sea basin. They told DW it has reached unprecedented levels — not just on the surface, but up to 25 to 30 feet (80 to 100 meters) below the water level and as far down as the seabed.

What's behind this scourge?

Baris Salihoglu, head of METU's Institute of Maritime Sciences, said it was hard to know what exactly was causing the sudden surge. But he told DW that pollution from organic compounds like nitrogen and phosphorus, as well as climate change had certainly played a part.

"We know that the [water] temperature in Marmora has increased by 2 to 2.5 degrees [Celsius/up to 4.5 degrees Fahrenheit] over the past 20 years, above the global average," Salihoglu said.

He said that other stressors like increased pollution from the surrounding watershed over the past half century — from agricultural or industrial runoff, for example, or the tons of sewage produced by more than 20 million people living around the sea — and overfishing have led to a loss in biodiversity and weakened the ecosystem. That has made the sea more susceptible to problems like marine mucilage. "It cannot tolerate these kinds of shocks," Salihoglu said.

Why is it a problem?

The Marmara Sea, an important ecosystem and waterway between the Aegean and the Black Sea, is home to richly diverse marine life, including mussels, crabs, clams, coral and around 230 species of fish.

As the sludge covers the surface and sinks beneath the waves to blanket the seabed, it sucks up oxygen in the water, creating dead zones that suffocate marine life and threaten the region's diverse ecosystem. 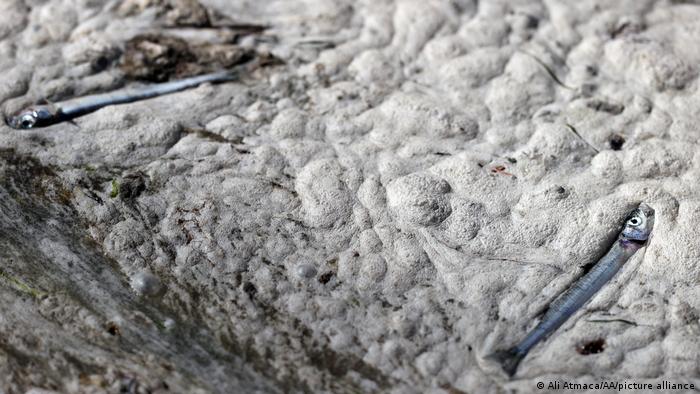 Starved of oxygen, fish are dying in droves

The Black Sea to the northeast, where sea snot was also spotted recently, supports the majority of Turkey's fishing industry, and its abundance is due in part to the oxygen supplied by an undercurrent from the Marmara Sea — oxygen which is now at risk. Fishing is also important in the Marmara, but with the sea snot increasingly choking out marine species and weighing down and snapping nets, the livelihood of fishers there is at risk.

"Of course it affects our work," Mahsum Daga, a 42-year-old fisherman, told the Agence France-Presse news agency. "You know what it does to shellfish? When they open up, it prevents them from closing up again because it gets in the way. All the sea snails here are dead."

The sea snot can also attract other microorganisms like viruses and bacteria, including the potentially deadly E. coli, which can harm sea creatures and people swimming in the gloopy water. The result: closed beaches, another blow for a tourism industry already struggling with the COVID-19 pandemic. Has this happened anywhere else?

Sea snot isn't new — it was first spotted in the Mediterranean in the early 18th century, and it has also been a problem in the neighboring Aegean and Black Sea. The relative stillness and shallow depth of these seas make them ideal for the formation of marine mucilage.

A similar substance formed after the April 2010 Deepwater Horizon oil disaster, some 40 miles (65 kilometers) off the coast of Louisiana in the Gulf of Mexico. Scientists have speculated that some of the spilled oil mixed with phytoplankton and other organic matter, sinking from the surface to cover the seabed and killing countless sea creatures as far as 130 kilometers from the site of the spill.

Harmful algal blooms are also caused by blue-green cyanobacteria in freshwater lakes and rivers and microalgae in marine environments that produce what is commonly known as toxic red tides. They've even turned up under the ice in the Alps and the Antarctic.

Rising temperatures and higher pollution levels have contributed to a surge in the size and frequency of algal blooms around the world in recent decades. A newstudy in Nature found that oxygen levels have dropped in hundreds of lakes in the US and Europe over the last 40 years, due in part to warming temperatures and decreased water clarity from human activity — which could in turn lead to more fish deaths, algal blooms and methane emissions.

"Oxygen is one of the best indicators of ecosystem health, and changes in this study reflect a pronounced human footprint,'' said co-author Craig E. Williamson, a biology professor at Miami University in Ohio.

Another kind of algae known as macroalgal bloom, occurs when coastal seaweed beds grow out of control and — much like microalgae — deplete oxygen levels, killing off other life forms. Since 2011, researchers have identified the world's largest macroalgal bloom extending nearly 9,000 kilometers from West Africa to the Caribbean Sea, fed in part by discharge from the Amazon River and other nutrient sources. They believe such massive blooms will become the new normal.

What's being done about it?

Turkey can't do much on its own to reverse climate change — and it has yet to ratify the 2015 Paris Agreement — but the Environment Ministry has outlined an ambitious 22-point plan to tackle the sea snot and clean up pollution in the Marmara.

Starting on June 8, the government is launching a fleet of emergency surface cleaning boats to "completely clean the mucilage in the Marmara Sea with scientific-based methods on a 24/7 basis," said Environment and Urbanization Minister Murat Kurum. The government also plans to designate the entire sea as a protected area by the end of the year, and coordinate efforts to reduce pollution and properly treat wastewater from coastal cities and ships — rather than treating the sea like a "cesspool," the head of the Marmara Municipalities' Union told the Daily Sabah daily newspaper.

"According to our scientists, if we reduce the amount of nitrogen by 40%, we'll have solved the root of this problem," Kurum told reporters, adding that all the provinces in the Marmara region would convert their wastewater treatment plants by 2024. "We will take all the necessary steps within three years and realize the projects that will save not only the present but also the future together."

"The implementation plan that the minister has presented is a very good start," said Baris Salihoglu of METU. He said if the measures were introduced quickly oxygen levels would begin to rise and the situation could start improving within months, though he warned against hopes of full restoration. "[The sea] will never recover it to its original pristine state, but its resilience hopefully will increase."

Insects live in abundance in every part of world except the sea, which covers more than 70 percent of the Earth's surface. So why is it that this tenacious species has failed to colonize the marine environment?