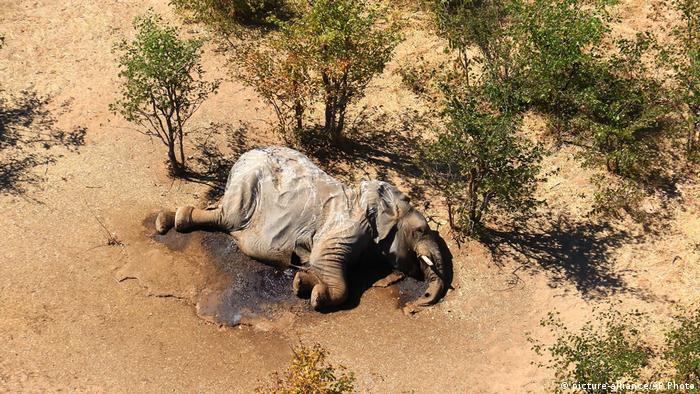 Toxins in water produced by cyanobacteria was likely responsible for more than 300 elephant deaths in Botswana this year, the country's wildlife department announced on Monday.

Elephants mysteriously started dying in the country's vast inland Okavango Delta from March this year, alarming conservationists and sparking an investigation. Some 330 elephants have died in the region.

Officials ruled out killing by poachers who hunt elephants for their ivory, because they died with their tusks intact. They also ruled out anthrax poisoning.

How did cyanobacteria poison the elephants?

Cyanobacteria are microscopic organisms common in water and sometimes found in soil. Some cyanobacteria produce neurotoxins.

The cyanobacteria "was growing in pans" or watering holes, the principal veterinary officer of the Department of Wildlife and National Parks, Mmadi Reuben, told reporters.

Reuben said the deaths had "stopped towards the end of June 2020, coinciding with the drying of pans."

"However we have many questions still to be answered such as why the elephants only and why that area only? We have a number of hypotheses we are investigating," added Reuben.

Similar elephant deaths have also been recorded in neighboring Zimbabwe.

Not all cyanobacteria are toxic but scientists say varieties dangerous to humans and animals are occurring more frequently as climate change drives up global temperatures.

Southern Africa's temperatures are rising at twice the global average, according to the Intergovernmental Panel on Climate Change.

Africa's overall elephant population is declining due to poaching. But Botswana, home to almost a third of the continent's elephants, has seen numbers grow to around 130,000.

Botswana's government said it was continuing studies into the occurrence of the deadly bacteria. In the winter, elephants hydrate themselves mainly by eating roots and bark, especially of the baobab tree.

Read more: No elephants poached in a year at Mozambique's Niassa wildlife park