No elephants poached in a year at Mozambique's Niassa wildlife park

Niassa Reserve, one of the biggest wildlife parks in Africa, marked a year without losing a single elephant to the poachers. Up to 4,000 of the animals roam the Mozambique park, which covers more land than Switzerland. 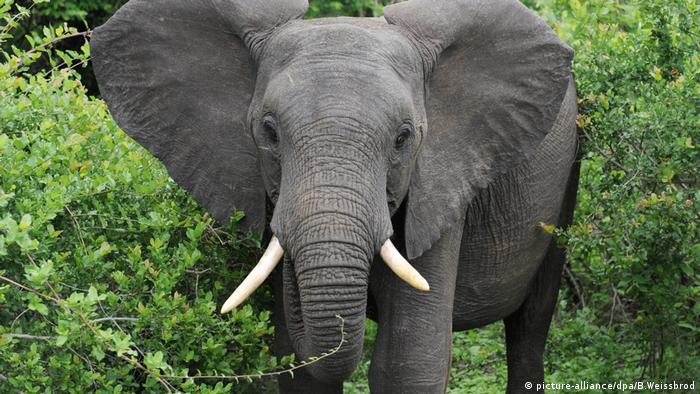 After years of rapidly shrinking numbers, wildlife experts at Mozambique's Niassa Reserve marked a year without a single elephant dying at the hands of poachers.

The last elephant to be poached in Niassa died in May last year, James Bampton from the Wildlife Conservation Society told the AP news agency in a report published on Saturday. The New York-based society manages the park in cooperation with Mozambique's government and other partners.

"It is a remarkable achievement," Bampton said.

Niassa, which is one of the largest wildlife parks in Africa and covers an area larger than Switzerland, boasted an elephant population of 12,000 as recently as 2011. Due to aggressive poaching, however, the number of animals plummeted to just above 3,600 in 2016.

'A reputation of being quite hard'

The population continued to shrink for some time after, prompting the officials to drastically boost the park's security. With personal backing from Mozambique president Felipe Nyusi, the national authorities deployed an elite rapid intervention force, which is better equipped than the park's normal rangers.

The new police unit also has "a bit of a reputation of being quite hard," according to Bampton.

Under local laws, being caught with a firearm inside the park is enough to be charged with "intent to illegal hunting," which carries a maximum penalty of 16 years in prison.

Additionally, the park security includes a small plane for patrolling, a dedicated vehicle for the rapid response unit and four motorbikes. A team of 50 people, including patrolling scouts and gate guards, works at Niassa alongside the police officers.

Based on unpublished data from a survey in October last year, James Bampton said that about 4,000 elephants now roam the reserve.

Despite good news from Niassa and some other national parks, experts warn that the elephant population is continuing to drop due to, in part, the spread of human settlements, which reduce the elephants' habitat.

In Botswana, which is home to Africa's largest elephant population — some 122,700 animals — President Mokgweetsi Masisi lifted the ban on elephant hunting last month. Masisi cited "conflicts between humans and elephants" on local farmland.

Experts believe Africa boasted several million elephants at the beggining of the 20th century. An estimated 415,000 elephants live there today.