While visiting Turkey, German Foreign Minister Heiko Maas pushed for a truce in Syria and said that Turkish troops should not be permanently deployed across the border. His Turkish colleague lamented "unjust" criticism. 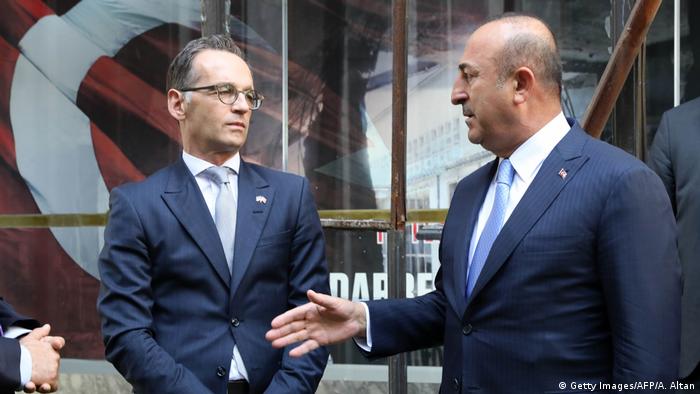 German Foreign Minister Heiko Maas was in Turkey on Saturday for talks with his Turkish counterpart, Mevlut Cavusoglu, in Ankara, where he pressed the Turkish government for a durable cease-fire in northeastern Syria.

Cavusoglu, at a news conference alongside Maas, rejected a plan from Germany's defense minister calling for an international "security zone," saying the proposal was not realistic.

Maas, himself a member of the left-leaning SPD party, also appeared to distance himself from the suggestion made by the conservative defense minister, Annegret Kramp-Karrenbauer, saying, "We are being told from all sides that it is not realistic."

Maas added that he did not spend too much time discussing the plan with Cavusoglu because "the people in Syria don't have time for theoretical debates."

Maas also hailed the provisions of the Sochi deal with Turkey that states Ankara "will not have a permanent presence in Syrian territory."

A meeting between Erdogan and Russian President Vladimir Putin in Sochi this week saw Turkey reaffirm Syria's territorial integrity and commit to joint patrols with Russian soldiers in the border area. Previously, Turkey agreed to a US-brokered cease-fire to allow Kurdish forces to pull out of the border zone.

The Turkish military and its rebel proxies launched an offensive against the Kurds in northern Syria on October 9. The operation has displaced at least 160,000 people and killed scores. Human rights organizations warned that war crimes may have been committed during the Turkish-led offensive, including the targeting of civilians and summary executions.

Ankara says the operation is aimed at targeting a Syrian Kurdish militia that it considers a terror organization linked to insurgents at home.

On Saturday, the Turkish foreign minister said Turkey would investigate any allegations of human rights violations in the region.

Cavusoglu on Saturday also lamented "unjust and serious criticism" against Turkey that came "most of all from Germany."

"Due to extremely negative reactions to our Peace Spring offensive from the German public, political parties and the media, our trust has unfortunately been shaken," Cavusoglu said.

"We have a hard time explaining to our people why Germany is siding with a terror organization, and not with Turkey, although (Germany) claims to understand Turkey's legitimate security concerns," the Turkish foreign minister added.

Cavusoglu also claimed that Turks living in Germany were feeling "pressured and lonely."

"As an ally and friend, we expect Germany to act in accordance with the spirit of our alliance and show solidarity in our fight against terrorism."

Germany 'keeping an eye' on Turkey

Germany has rejected Turkey's justification for a military push into Kurdish-dominated regions of northeastern Syria.

Earlier this week, Maas warned that Germany was keeping an eye on Turkey's Syria actions following a fragile US-brokered truce.

"We have been very clear that we are keeping other measures open — and they might also include economic sanctions," Maas said.

"We do not believe that an attack on Kurdish units or Kurdish militias is legitimate under international law," the German foreign minister added.

"Given the background of the Turkish military offensive in northeastern Syria, the Federal Government will not issue any new permits for any military equipment that could be used in Syria by Turkey," Maas told the Bild am Sonntag newspaper.

"If you understood anything of politics, you wouldn't say that," Erdogan said, referring to the arms restrictions announced by Maas.

German-Turkish ties were particularly rocky in the aftermath of 2016's failed coup attempt in Turkey and the widespread crackdown by Erdogan's regime that followed.

The detention of several German-Turkish activists and journalists were a particular point of tension, not least that of Deniz Yücel. Over the past year or so, however, many of the detainees were released and tensions had appeared to subside.