Turkey and China have expanded ties, but their relationship is marked by continued distrust and competition. The two sides are expanding economic cooperation but fundamental political differences remain. 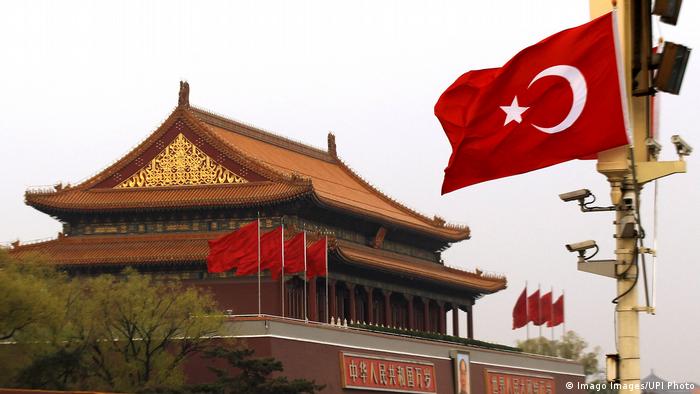 Turkish President Recep Tayyip Erdogan is in Beijing on Tuesday to meet his Chinese counterpart Xi Jinping, as the two countries seek to build on budding economic and political ties at a time both are experiencing a low point in their relations with the United States.

Turkey is increasingly estranged from the United States and Western allies over differences on Syria, Ankara's planned purchase of Russia's S-400 missile system and democratic backsliding following the failed coup attempt in June 2016.

The fallout has fueled speculation by some observers that NATO member Turkey may be rebalancing its strategic relations away from the West to the East — not least because Erdogan has suggested Turkey could join the Shanghai Cooperation Organization, a regional security body composed of China, Russia and four Central Asian nations.

Meanwhile, the ongoing US-China trade dispute coincides with the world's two largest economies being locked in a geopolitical power struggle to define the future world order.

However, Erdogan's eighth meeting with Xi since 2012 is more about economics and diversifying relations, not part of a strategic shift to the East, experts said.

He added that Ankara's foreign policy aims to make Turkey an international actor capable of expanding relations with all countries, unlike during the Cold War when it was tied to the Western bloc.

Kadir Temiz, a faculty member at Istanbul Sehir University, said that although China is becoming an important country for Turkey, the relationship centers on common interests in developing economic ties.

One main area of divergence between Ankara and Beijing is over the Syrian war, where Turkey has backed the opposition and China has economically and politically supported the regime and Russia's military intervention.

The trade relationship is marked by a massive $18 billion imbalance in China's favor, something that Turkey is seeking to address by expanding exports and attracting Chinese investment at a time its economy is struggling.

For China, Turkey's position at the crossroads of the Middle East, south Caucasus, Eastern Mediterranean and Europe makes it a key geographical location for Xi's Belt and Road Initiative and his bid to expand its global influence to balance against the United States.

"Turkey's position on the Belt and Road Initiative has the potential to determine the trajectory of Beijing's future policy as it seeks to connect China to Europe," said Temiz.

Washington and its European allies have warned that the Chinese plan to finance and build infrastructure across the globe could lead to a debt trap, creating dependency on Beijing for its strategic gain.

Turkey looks at Belt and Road positively, seeing it as complementary to its own "Middle Corridor" initiative to create a rail and road network along the ancient Silk Road from Turkey through the Caucasus and Central Asia to China.

At odds over the Uyghurs

Erdogan, who in 2009 accused Beijing of committing "a kind of genocide" against the Uighurs, has remained relatively mute in recent years as China has rounded up an estimated one million people from the Turkic, mostly Muslim ethnic group in western Xinjiang province.

The plight of their ethnic Turkic cousins has long stirred passions among religious-nationalist circles and the Uighur diaspora in Turkey.

Turkish officials in February described as a "shame for humanity" the "systematic assimilation policy" against the Uighur. Since then, Turkey has been relatively mute.

China says its "reeducation camps" are intended to fight Islamic radicalism and terrorism. Several thousand Uighur Islamic fighters are believed to have traveled through Turkey to join militant groups in Syria.

Beijing says these Syrian trained Uighur Islamic fighters have carried out attacks in western China and fears that more battle-hardened fighters will return to wage war.

On the Uighur issue, Ankara wants to avoid angering China at a time its economy is weak. At the same time, China fears that Erdogan, a widely popular figure in Muslim world, could stir anti-Chinese sentiment if were too vocal about the treatment of the Uighurs.

"Turkey is trying to follow a careful policy on this," said Atli, adding that the government has supported Chinese sovereignty and right to fight against terrorism, while expressing that not every Muslim is a terrorist.

Chinese investment is causing disquiet in a number of places, particularly in the US and Europe, according to a new survey. The sentiment poses a problem for Chinese firms seeking to expand their global footprint. (20.05.2019)

As Russia, the EU and China eye the Western Balkans, it may be that the old colonial power, Turkey, is best placed to play a key role in the region. And this perhaps because of, not despite, its economic problems. (27.09.2018)