An EU Commission report has said membership talks with Turkey are at a "standstill," citing eroding civil liberties and rule of law under President Recep Tayyip Erdogan. Turkey has called the assessment inaccurate. 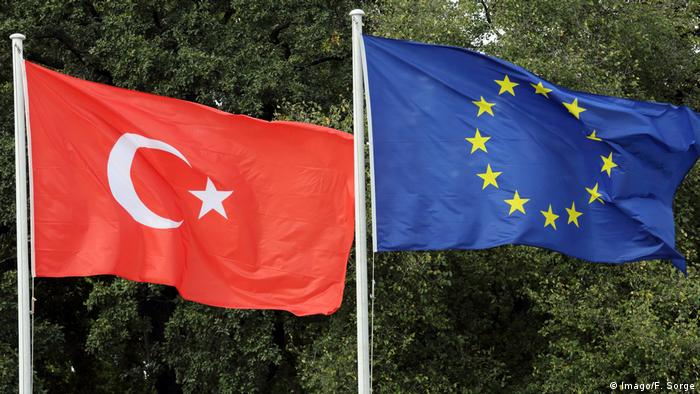 In its annual report on Turkey's membership talks with the EU, the European Commission on Wednesday said Turkey was "seriously backsliding" on implementing the Commission's recommendations regarding human rights, the rule of law and economic policy.

"Turkey has continued to move further away from the European Union," the Commission said in its report, adding that membership negotiations had effectively come to a "standstill."

Last year, the EU agreed that Turkey's accession talks should remain on hold. The 2019 report noted that the "underlying facts" leading to this assessment had not changed. EU governments are set to approve the report in June. Turkey has been holding membership talks with the EU since 2005.

Turkey's deputy foreign minister, Faruk Kaymakci, told Reuters news agency on Wednesday that the EU report did not "accurately assess the current situation" in the country, and that Turkey would not accept the report's "unfair criticism."

The Commission said Turkish President Recep Tayyip Erdogan's crackdown on dissidents, democratic elections and rule of law means Turkey's government lacks the checks and balances necessary to meet the democratic criteria to be a candidate for EU membership.

The serious concerns raised in the report included the "broad scale and collective nature of measures" taken since a state of emergency was declared following an attempted 2016 coup, such as widespread arrests and detentions.

"The space for civil society organizations working on fundamental rights and freedoms has further shrunk, notably exemplified by the introduction of further administrative obstacles," the report said.

Although the EU condemned the attempted coup, it criticized the continued extension of the state of emergency measures, and in 2018, a new law that essentially made its "repressive elements" into law.

Earlier in May, Turkey's electoral authority ordered that Istanbul's mayoral election be rerun after President Erdogan's Justice and Development Party had filed a motion to nullify the results of the March 31 election.

The Commission said the move to hold a second election went against the "very core of a democratic electoral process."

However, despite criticism of its institutions, Turkey remains an important European security partner, and the EU relies on Turkey to stem the flow of refugees from Syria.

Turkey currently houses more than 3 million Syrians fleeing a civil war. The EU has also praised Turkey for its role in reducing the number of refugees trying to cross into Greece on boats.

Following Russia's invasion, Ukraine is among a group of states seeking to join the bloc as quickly as possible, hoping to align themselves closely with the West and receive protection. But the decision to grant candidate status is the first step of a long and complicated process.