Tunisian FM: 'We are not yet a democracy'

Is Tunisia, the only democracy to emerge from the Arab Spring, slipping back into repression and chaos? Tim Sebastian meets Foreign Minister Khemaies Jhinaoui.

Since ousting its authoritarian President Zine al Abidine Ben Ali in 2011, Tunisia has struggled in its transition to a democracy. The Arab Spring began in the North African country and Tunisians have indeed enjoyed unprecedented political rights and civil liberties since the transition to democracy began. But authorities have struggled to control corruption, high unemployment and have faced new security threats. The country has seen nine governments since the revolution. None have been able to completely address these issues.

In January 2018, a Freedom House report stated that Tunisia has come "dangerously close to losing its status as the only 'free' country to emerge from the Arab Spring." Two high-profile Islamist attacks in the country 2015 targeted the country's all-important tourism sector. The number of European tourists to Tunisia rapidly declined as did foreign investment. The country's public debt has risen 40 billion dinars (around 13.4 billion euros).

Tunisia has struggled to contain an Islamist insurgency while reforming its security forces to respect human rights and build the economy.

Tunisia's Foreign Minister Khemaies Jhinaoui admitted that his country still has a long way to go in a DW interview: "To be honest, we are not yet a democracy. (…) We are on the path of reaching a democratic system where transparency and the rule of law will be respected [100 percent]." 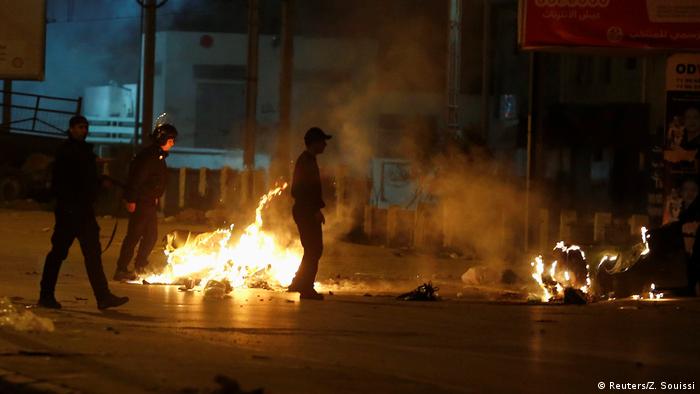 Police clash with protesters during demonstrations against rising prices and tax increases, in Tunis on January 10, 2018.

In January 2018, on the seventh anniversary of the Arab Spring, thousands of Tunisians protested against austerity measures – the government had passed the 2018 Finance Act which increases taxes and raises fuel prices to solve the inflation.

Seven years after the uprisings for "work, freedom and dignity" many young Tunisians feel that, beyond freedom of expression, they have gained little from the revolution. This is one of the reasons why the number of Tunisians trying to cross the Mediterranean by boat was higher in 2017 than at any time since the Arab Spring in 2011.

A campaigner for one of the protesting organizations, Hamza Obeidi, told DW News in January 2018: "The Tunisian economic system has not improved after the revolution because it is still based on the policies adopted since independence." He said the country is still battling with the corruption of the Ben Ali regime, which ruled the country more than two decades. Obeidi said the current government's "war on corruption is merely media marketing."

But Tunisia doesn't just have a problem with the economy. Several human rights organizations heavily criticized the government’s handling of the protests. Human Rights Watch accused the Tunisian police of beating up some of the people detained and denying their right to a lawyer. Some people were allegedly only arrested for distributing leaflets calling for social justice.

Foreign Minister Jhinaoui, who called protest "a healthy sign" in a democracy, responded to the allegations: "Is mistreatment a policy, a deliberate policy in Tunisia today? I can tell you, no."

"More than 700 people [were arrested], most of all of them they have been freed. Those who were involved in looting, vandalism, they went to the court and they have been persecuted according to the law. Tunisia today is a country which respects the role the rule of law."

Prime Minister Youssef Chahed vowed to end the critical period after the demonstrations: "People have to understand that the situation is extraordinary and their country has difficulties but we believe that 2018 will the last difficult year for Tunisians." 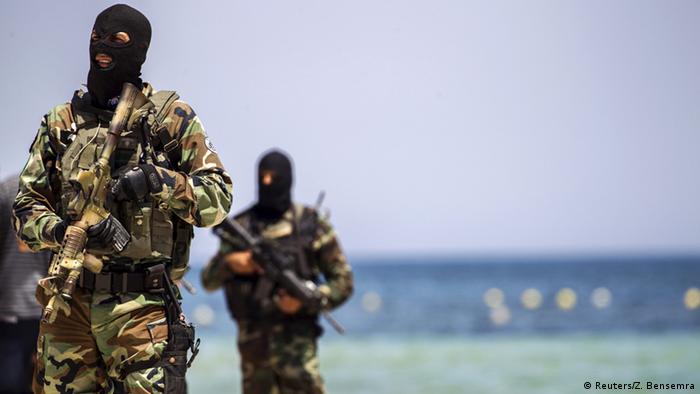 Tunisia's special forces secure the beachside of the Imperial Marhaba resort, in Sousse, Tunisia, on June 29, 2015. A gunman disguised as a tourist had opened fire at the Tunisian hotel days before, killing 39 people in an attack claimed by Islamic State.

In the years following the Arab Spring, extremists have started radicalizing and recruiting young people. The immediate danger of this development can be seen in the terror attacks in 2015 on the Bardo Museum and a beach front hotel in Sousse as well as an attack on the presidential guard in November 2015.

Asked about how the country is coping with the terrorist threat, Foreign Minister Jhinaoui said: "Today, I think that our forces are better trained, well-equipped."

He said a US State Department report stating that terrorist groups continue to operate in the mountains of western Tunisia was ”too exaggerated” and said there is "no territory in Tunisia held by terrorists."

"We are not like other Middle-Eastern countries where terrorists were able to hold the peripheries. Tunisia is completely under control of the state. (…) The last two years, Tunisia was immune [to] any terrorist threat."


But more people have volunteered to join the so-called 'Islamic State' from Tunisia than from any other country. Now that 'IS' has collapsed in Syria and been removed from Iraq, several thousand Tunisians who had joined its ranks are believed to have returned home.

When DW's Tim Sebastian confronted him with these numbers, Jhinaoui called them "exaggerated." According to the Tunisian Forum for Economic and Social Rights, Tunisia has no proper de-radicalization program in place for foreign fighters with many allegedly only being placed under house arrest after returning.

The foreign minister said: "There is a comprehensive policy trying to de-radicalize all these young people. (…) If they come [to] any democratic country which is respecting the rule of law, these people, when they come back, of course they are held, interrogated by the police and, if found guilty, they go to the court and of course they will be prosecuted accordingly."

Fresh protests in Tunisia on anniversary of Arab Spring uprising

Protesters have lit flares and shouted anti-government slogans on the seventh anniversary of the Arab Spring uprising. Anti-austerity rallies have slammed a government decision to raise taxes amid an economic slump. (14.01.2018)

Tunisians have taken to the streets of several cities including the capital in a third night of violent protests. The government has vowed to crack down. (11.01.2018)

US State Department report on terrorist groups operating in Tunisia