Fresh protests in Tunisia on anniversary of Arab Spring uprising

Protesters have lit flares and shouted anti-government slogans on the seventh anniversary of the Arab Spring uprising. Anti-austerity rallies have slammed a government decision to raise taxes amid an economic slump. 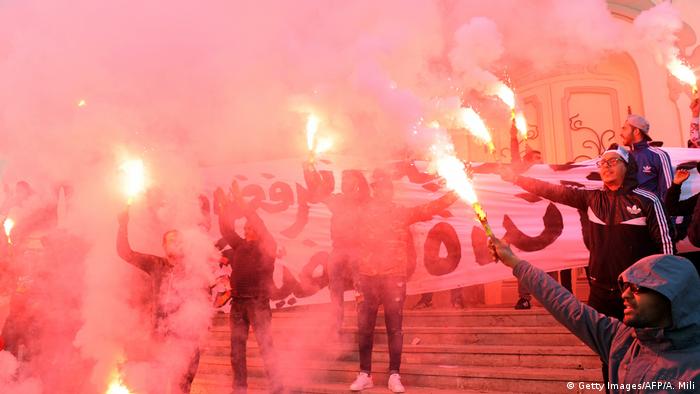 Hundreds of people gathered in the Tunisian capital, Tunis, on Sunday to protest against austerity and unemployment on the seventh anniversary of the country's democratic transition of power. Some protesters shouted slogans against the government while holding flares.

State security forces set up blockades in front of entrances to Habib Bourguiba Avenue, where many people rallied at the site widely associated with the 2011 toppling of the country's former dictatorship.

The powerful UGTT labor union and several political parties, including the opposition Popular Front alliance, had earlier called for the demonstrations to coincide with the anniversary of the beginning of the Arab Spring revolutions.

President Beji Caid Essebsi marked the anniversary by visiting a youth center in a working-class suburb of Tunis that had witnessed vandalism and looting earlier in the week.

Anti-austerity protests and nighttime unrest have rocked Tunisia since Monday, after the government announced tax hikes and increases in social security contributions at the beginning of January.

One protester has been killed, more than 100 police officers have been injured and over 800 people arrested, according to the Interior Ministry.

The government on Saturday announced financial aid for the poor and free access to health care for unemployed people. The announcement followed meetings between the president and several labor unions, political parties and companies.

Read more: Opinion — Is Tunisian democracy in danger of collapse?

Tunisia is widely viewed as the only successful country to transition to democracy as part of the 2011 protests that helped spark revolutions around the Middle East and North Africa.

Tunisia's transition began after the deadly self-immolation of a street vendor in Tunis to protest against police harassment in late 2010.

Although Tunisia went on to adopt a new constitution and hold free elections, multiple governments have struggled to improve the economy after deadly terrorist attacks harmed the country's vital tourism sector in 2015.

Official figures put unemployment at 15 percent nationwide and above 25 percent in certain regions. Some experts have estimated inflation to be over 9 percent.

Read more: Is there a trade-off between a strong economy and democracy?