Thousands of demonstrators have taken to the streets of Hanover to protest a planned trans-Atlantic free trade agreement. The rally comes just a day ahead of US President Obama's visit to the German city. 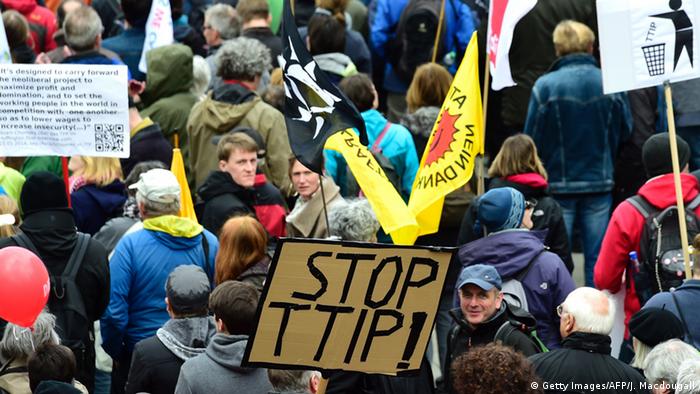 "Obama and Merkel are coming: stop TTIP and CETA," organizers said would be the motto for Saturday's protest. CETA refers to the Comprehensive Economic and Trade Agreement between the EU and Canada.

Obama is expected to promote the TTIP agreement when he joins Chancellor Angela Merkel to open the world's largest industrial trade fair in the northern German city of Hanover on Sunday.

In an interview with German newspaper "Bild" ahead of his visit to Germany, Obama reiterated his belief that the deal would strengthen trade and create jobs in the US and the EU.

Critics disagree, arguing the TTIP would drive down wages, erode consumer protection and environmental standards. Courts, opponents of the pact maintain, could place the interests of corporations above those of democratically elected governments, citing a recent case where tobacco giant Philip Morris sued Uruguay over a law requiring graphic warnings on cigarette packages.

The 13th round of TTIP talks is set to start on Monday in New York. The talks have come under heavy criticism for the secretive manner in which they have been conducted.

US lawmakers have only been permitted to view the draft documents in special reading rooms and are forbidden from talking about the documents with experts, the media or their constituents.

On the other side of the Atlantic, Germany's chancellor has been forced to defend the secrecy in negotiations on the free trade agreement between the EU-bloc and the US.

Listen to a TTIP special on DW's WorldLink

It cannot "always be accessible to everyone in advance," Merkel said in her weekly podcast published on Saturday.

Negotiators on both sides of the Atlantic have expressed the hope of concluding the talks under the Obama administration, but time is running out with US elections due in November.

In November last year, more than 100,000 people marched through the streets of Berlin to protest the proposed pact.