The EU and Canada have announced a breakthrough towards completing the Comprehensive Economic and Trade Agreement (CETA) - a controversial free trade pact that is now likely to come into force next year. 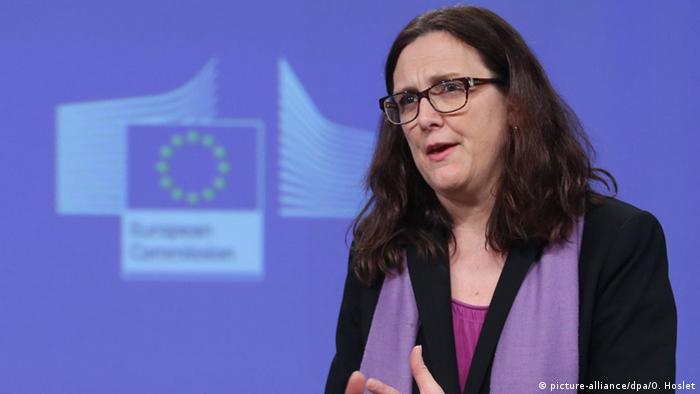 EU Trade Commissioner Cecilia Malmström and Canada's Trade Minister Chrystia Freeland said in a statement Monday that the legal review of CETA had been "completed" and that both Canada and the EU were "confident" the controversial free trade deal would be signed in 2016 and enter into force in 2017.

"This is really a gold plated trade deal," Freeland said at a briefing in Ottawa, calling it a "landmark trade agreement."

Canadian and European leaders formally concluded the deal in 2014, but implementation has been delayed due to last-minute objections in Europe over provisions to create an investment protection system that would help protect companies from government intervention.

This system is key to a similar but far more ambitious agreement currently under negotiation between the EU and US and has drawn fierce criticism in Europe. In Germany, hundreds of thousands of people rallied in October to oppose both accords. Opponents say the measure favors big business, which could fight national regulations that violate the trade deal and threaten their investments.

The new deal includes important modifications to the contested investor protection system, under which a permanent tribunal staffed with independent, qualified adjudicators would hear any complaints.

Canada signing off on the changes is a significant victory for the European Commission, which is facing huge pressure to have the US agree to the same offer.

"This is virtually 100 percent what we have proposed to the United States," a senior EU official told the news agency AFP.

The EU is second only to the United States among Canada's trading partners, while Canada ranks as the 12th most important trading partner for the EU. Among other things, the deal will remove 99 per cent of customs duties - representing annual savings of 407 million euros ($445 million) in tariffs alone.

Transatlantic free trade in the balance

The planned EU free trade agreements with the US and Canada have been clouded by months of uncertainty. Now a compromise appears to be in the making following a visit by the EU trade commissioner to Berlin. (11.11.2014)

'With TTIP, EU and US promise a transatlantic trade miracle'

Thousands march in Berlin for a new approach to farming

Tens of thousands of protesters have marched in Berlin to demand a new farming policy for Germany. The demonstration takes place every year as Germany hosts the largest agricultural fair in the world. (16.01.2016)