The White House's latest request for additional hurricane aid relief has fallen far short of what was expected. If approved, total relief would fall at around $100 billion, with more funding requests expected to follow. 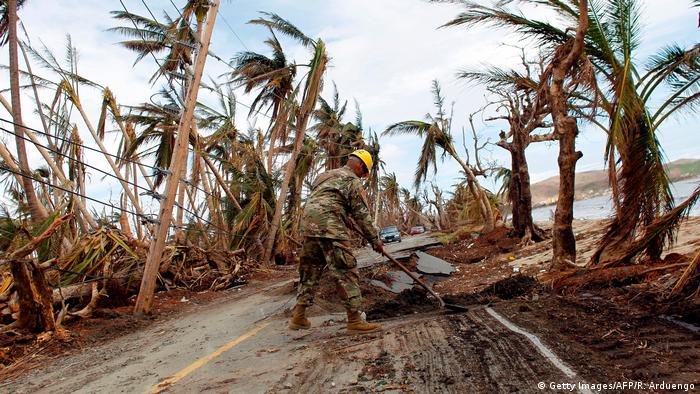 The Trump administration's relief measures for the US' hurricane-hit regions were staunchly criticized by both Republican and Democratic lawmakers on Friday.

The White House requested an additional $44 billion (€37 billion) in disaster aid from Congress on Friday, which, if approved, would take the total appropriated amount to almost $100 billion. It was the third such request in the wake of a particularly devastating hurricane season in August and September, as three separate storms — hurricanes Harvey, Irma and Maria — hit the Gulf Coast and Caribbean.

Although the White House said Friday's request would not be the last time it would ask for additional funding, the relatively small relief packages requested so far have raised questions around the administration's response towards assisting victims and rebuilding damaged infrastructure.

In a joint-statement, Representative Frank Pallone and Senator Ron Wydon, both Democrats, described Friday's request as a "dereliction of duty by the Trump administration to American," particularly in Puerto Rico and the US Virgin Islands.

"This woefully inadequate funding request does not provide the necessary resources required to properly respond to the ongoing humanitarian crisis," they added.

Trump allies in Texas far from pleased with relief funding

Republican Texas Governor Gregg Abbott, a Trump ally, said the $44 billion aid request was "completely inadequate." The governor, along with Texas GOP Senator John Cornyn, has been battling with the White House for additional disaster funding since September, and succeeded in doubling the administration's initial aid request.

However, despite the subsequent appeals, total relief funding is still a not even close to the $61 billion Texas officials say they need to rebuild damaged infrastructureand prevent future flooding disasters.

"Up until this point Texas has not put any state dollars into this process," Huckabee Sanders said. "We feel strongly that they should step up and play a role and work with the federal government in this process. We did a thorough assessment and that was completed and this was the number that we put forward to Congress today."

Florida Senator Bill Nelson also decried the White House's aid requests, saying the funds so far requested did not "come close to providing what is needed."

Nelson added: "People are hurting and they desperately need our help, yet this request has no money to provide housing for evacuees and barely any money for Florida's citrus growers. That's unacceptable."

Florida's congressional delegation has asked for $27 billion in aid.

Puerto Rico, which was the most devastated US territory in the wake of Hurricane Maria, has said it alone requires some $94 billion in aid, including $18 billion to rebuild its power grid and $31 billion for new housing.

It remains unclear when the Trump administration plans to make any subsequent aid requests to Congress.

Puerto Rico after the Storm