More than 40 people have died as a result of Hurricane Harvey, which could cost the US more than $100 billion. The US President will return to the disaster-struck region today. 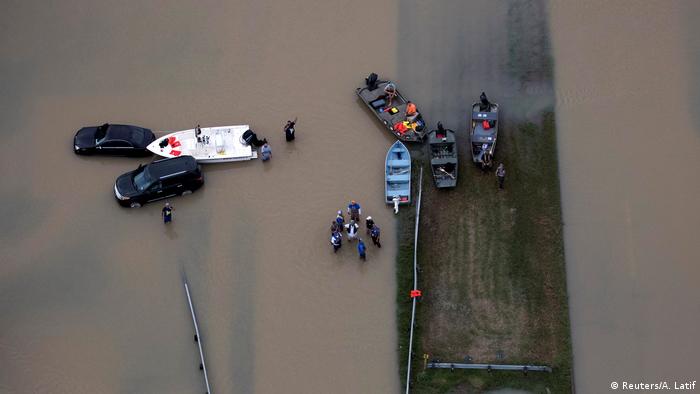 US President Donald Trump on Friday requested $7.85 billion (€6.62 billion) from Congress in federal disaster relief in the wake of Hurricane Harvey.

More than 40 people are confirmed dead and more than 1 million people were evacuated due to the storm, which wrecked havoc on parts of Texas over the past week.

Texas Governor Greg Abbott said his state may need more than $125 billion to recover from the storm. The Trump administration said it would request money in stages and that the first amount was for response and initial recovery efforts.

Abbot said 440,000 Texans have already applied for federal financial disaster assistance, of which $79 million has been approved.

"There are still many rescues in the region, but with regards to the city of Houston, we are starting to move into the recovery phase with the number of rescues being dramatically down," Turner said at a briefing.

Nearly 4 trillion liters (1 trillion gallons) of water fell on Harris County, home to Houston, and 136,000 buildings were flooded by the Category 4 hurricane, according to local flood control authorities. About 70 percent of the county was covered by half a meter (20 inches) of water.

Turner called for new voluntary evacuations from Houston's flooded west side, ahead of attempts by the Army Corps of Engineers to prevent dam and levee failures by releasing water.

The storm fouled the municipal water supply of 120,000 people in the town of Beaumont, 125 kilometers (78 miles) east of Houston, leading to a queue more than 1 kilometer long for bottled water.

Fires broke out at a flooded chemical factory in Crosby, 30 kilometers northeast of Houston, after two trailers of highly unstable compounds ignited.

The White House said Trump would return to the region on Saturday to visit victims in Houston and Lake Charles, Louisiana.

Trump visited the Gulf region on Tuesday but avoided the disaster region to not hamper rescue efforts, instead meeting with state and local leaders, as well as first responders.

Gasoline prices rose 17 cents to a two-year high in the wake of the storm, which shut down about a quarter of the country's refinery capacity.

Wearing a "LOVE" emblazoned jacket, the US first lady stole the limelight from her husband, President Joe Biden, ahead of the G7 summit. But was she trolling the former FLOTUS?