US President Donald Trump has visited Texas as Houston imposed an indefinite curfew amid reports of looting and armed robberies. An evacuation order has been issued south of the city after a levee was breached.

Authorities in Houston are watching strained dams and levees after historic torrential rains caused reservoirs to overflow and unleash further flooding across the sprawling metropolis.

An evacuation order was issued on Tuesday after a levee was breached just south of Houston. "Get out Now!!" Brazoria County officials told residents, after water from the Brazos River broke over the levee at Columbia Lakes.

Matt Sebesta, the county's chief administrator, urged residents of the Columbia Lakes neighborhood - which lies some 50 miles (80 kilometers) south of Houston - to leave.

"They need to get out. Get to higher ground," he said in a televised interview.

Just west of Houston, both the Addicks and Barker reservoirs were said to be at record-high levels and already overflowing, despite efforts from the Army Corps of Engineers to release water in a controlled way.

The release of water will cause further flooding of streets and neighborhoods, said Jeff Lindner of the Harris County Flood Control District.

The disaster has unfolded on a dramatic scale, with Houston - the fourth largest city in the US - paralyzed by the storm and subsequent flooding.

Rescuers are still plucking people from vantage points around the city's submerged neighborhoods.

More than 10,000 people are being housed at the George R. Brown Convention Center, and the city has said it is opening several additional emergency shelters to alleviate crowding.

Late Tuesday, the city imposed an overnight curfew and said it would bring in additional police from other regions in an effort to control looting, armed robberies and people impersonating police officers.

"You cannot drive, nor be in any public place. We have had problems with armed robberies, with people with guns and firearms," said Houston Police Chief Art Acevedo.

President Donald Trump and his wife, Melania, arrived in Texas earlier in the day, although they were not scheduled to visit Houston. Instead, the pair visited the city of Corpus Christi - close to where the hurricane, later downgraded to a tropical storm - made landfall on Friday. 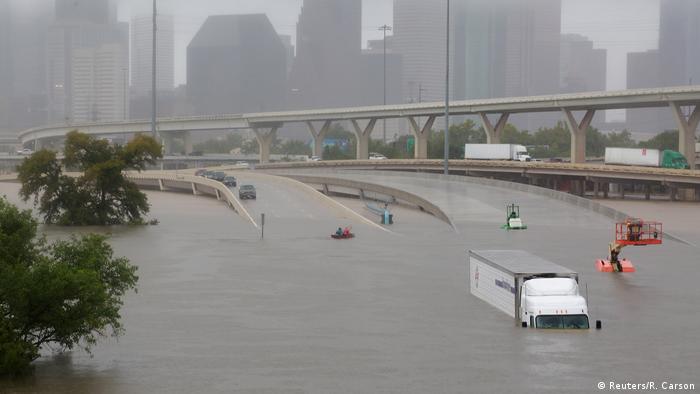 Trump, who is dealing with his first natural disaster as president, said he wanted the relief effort to stand as a textbook example of disaster management. "We want to do it better than ever before," he said.

He has promised the federal government will be on hand to help Texas on its "long and difficult road to recovery" from the storm.

The president received briefings on relief efforts and met members of local organizations dealing with the crisis. Corpus Christi is slowly recovering but still lacks a reliable, safe source of drinking water in many parts.

On Monday, Trump declared a state of emergency in neighboring Louisiana, which is next in line for torrential downpours. 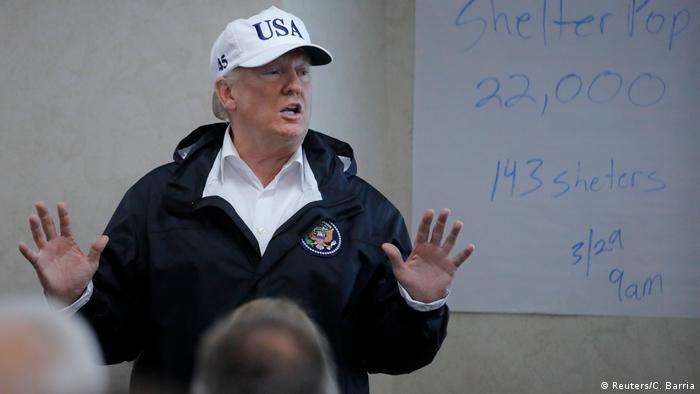 The medical examiner's office for Harris County, which includes Houston, has confirmed at least 12 deaths since Sunday that were "potentially tied to Hurricane Harvey."

Officials on Tuesday warned that the danger had not yet passed, with more families still stranded by the floodwaters or housed in emergency shelters. Meanwhile, the tropical storm appeared to be gathering strength once again on the Gulf coast.

Read more: Hurricane Harvey - The emergence of an elemental force