Hurricane Harvey: The emergence of an elemental force | Science| In-depth reporting on science and technology | DW | 28.08.2017

Hurricane Harvey: The emergence of an elemental force

Tropical storms develop above the sea, need a certain water temperature and a low pressure area. For a natural disaster as devastating as Hurricane Harvey to occur, certain ingredients must come together. 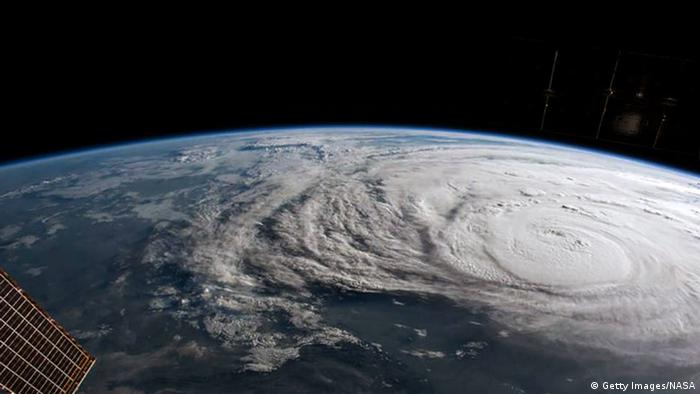 It is quite possible that Hurricane Harvey will leave the US mainland again and move toward the Gulf of Mexico. That's what experts from the US National Hurricane Center (NHC) suggest. But that should not be a reason to celebrate, because the warm water of the gulf is largely responsible for the devastating powers of hurricanes.

After all, Harvey could recharge and then hit the coast a second time with all its might. While this is still a future scenario, the possibility should not be underestimated. Harvey is already causing huge damage and suffering. But how does such a powerful storm develop?

Recipe for a tropical storm

According to the German Weather Service (DWD), Harvey was first spotted on August 13th. It was initially considered a "tropical low pressure area" and appeared to be quite harmless. But subsequently it developed into a full-blown tropical storm.

"Hurricanes need certain preconditions to develop," says Andreas Friedrich, a meteorologist and expert on tornadoes at the DWD. One of them is a surface temperature of 26 degrees Celsius [79 degrees Fahrenheit]. And the ocean surface with that temperature must be at least several hundred square kilometers [several times 40 square miles] large, Friedrich explained.

Finally, an area of low pressure must be added to the mix, to turn it into a hurricane: "Often, small areas of low pressure are moving from the western coast of Africa along with the monsoon current across the Atlantic into the warmer waters," Friedrich pointed out. Furthermore, there must not be strong winds close to the ocean surface and in higher areas, the expert said, adding that those would disperse the storm. 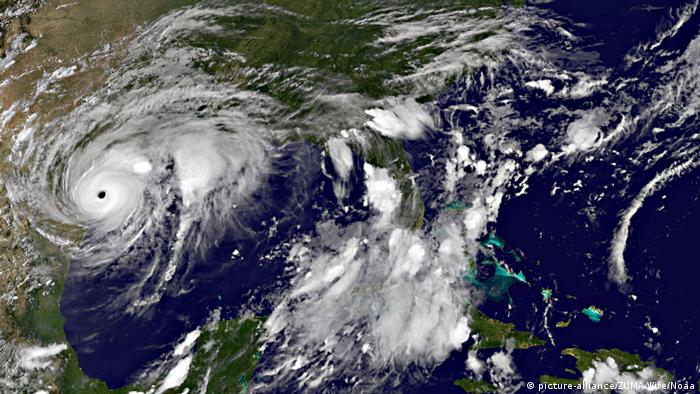 A satellite picture of hurricane Harvey. The eye of the storm is clearly recognizable.

If everything comes together, an area of low pressure can turn into a tropical storm. Then moist and warm sea air moves up, condensates in higher altitude and forms storm clouds.

The air moves up, creates negative pressure at sea level, sucking in more moist air from the surrounding areas. Like in a chimney, the air masses get drawn high up. The Coriolis force – which is linked to the earth rotation – gets the air masses moving in circles. "In the center of the hurricane the typical 'eye' emerges. There, it is windstill and the sky is clear, while at the edges, the clouds keep piling up higher and higher," Friedrich says.

The longer those favorable conditions for the hurricane prevail, the more powerful the outcome. Harvey grew so strong that the NHC qualified it as a category four storm on a list of five. "Tropical storms are moving at an altitude of five to eight kilometers [16,000 – 26,000 feet] with the help of air currents. Those decide, where the hurricane moves," Friedrich said.

In the case of Harvey it was the Texan mainland. With wind speeds at 215 kilometers [133 miles] per hour it hit land on Friday. 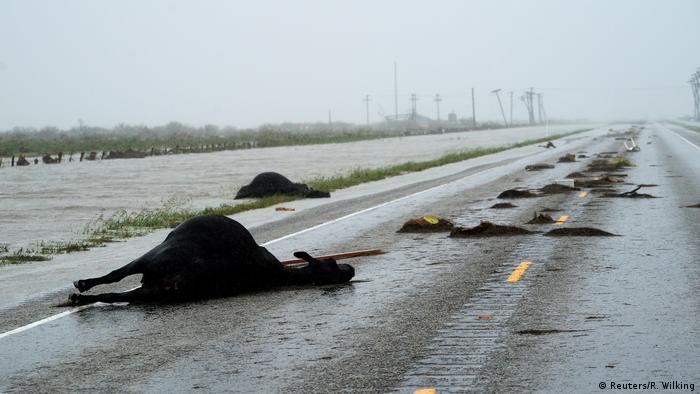 Storm Harvey has left behind devestation and death.

Usually hurricanes lose force soon after hitting land. The higher air currents make the storm move inland quickly and divorce it from its main source of energy – the warm and humid sea air. Later, they turn into areas of low pressure and eventually lose their devastating power.

That was not the case with Harvey: "There were hardly any winds above the Gulf of Mexico and in the southern US. That's why Harvey moved very slowly," Friedrich says. The storm will further be nourished by humid air – humidity that will then fall back in the form of rain.

Texas battling floods in the wake of Storm Harvey

Stronger hurricanes due to climate change?

Climate change is largely responsible for higher ocean surface temperatures, therefore creating more favorable conditions for hurricanes, experts say. "The larger the ocean areas with temperatures above 26 degrees Celsius are, the higher the possibility for hurricanes to develop," Friedrich noted. Climate models suggest that in future we will not only witness more but also stronger hurricanes, the meteorologist says.

Houston's emergency services are only responding to life-and-death calls and the storm is just half-way through its course over Texas. Ahead of the storm, residents were left unsure of whether to evacuate or not. (28.08.2017)

Although scientists don't yet have the means to definitively quantify the link between climate change and severe storms like Hurricane Harvey, global warming is still likely a factor. (28.08.2017)