Two explosions and billowing smoke have been reported at a flood-hit chemical plant near Houston. Residents nearby have been ordered to evacuate. 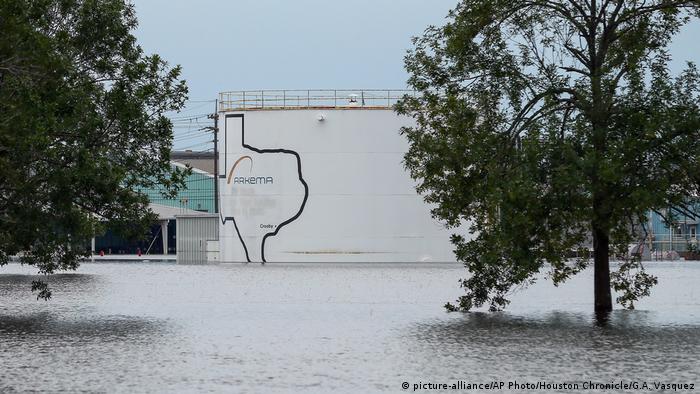 Two explosions were heard at the flood-hit Arkema SA chemical plant in Crosby, Texas, on Thursday, after plant managers had warned of an impending accident.

Authorities had earlier ordered an evacuation for all remaining workers and everyone within a 1.5-mile (2.4-kilometer) radius. Black smoke was seen rising from the damaged plant after the explosion.

"At approximately 2 a.m. CDT (0700 UTC), we were notified by the Harris County Emergency Operations Center of two explosions and black smoke coming from the Arkema Inc plant in Crosby, Texas," the company statement said. 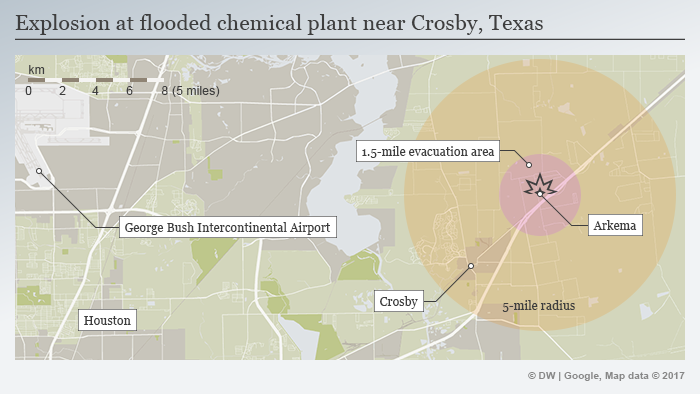 Despite the plant managers saying there were two explosions, local authorities insisted it was just a "chemical reaction."

Local resident John Villarreal, 45, told news agency AFP he saw "a lot of smoke, and you could see the flames in the smoke."

"We could hear a few pops," he said. "I would call it like an aerosol can in a fire type deal."

Villarreal, who once worked at the plant, said many in his his neighborhood did not evacuate because "there was really no clear direction" from authorities.

Journalists reporting on the accident were ordered to move 5 miles (8 kilometers) away from the plant.

Arkema warned that further explosions were likely, but said the best course of action was to let the fire burn itself out.

The company said the fumes could cause eye and skin irritation as well as nausea, drowsiness or dizziness and breathing problems. It called on residents within the 1.5-mile evacuation area to turn off their air conditioners to avoid possible smoke exposure.

The Harris County sheriff's office said 15 people were in hospital after inhaling fumes from the plant, many of whom drove themselves there as a precaution. The sheriff later said most of them had been given the all-clear by the hospital and that he expected the same result for the others.

Sheriff Ed Gonzalez said the plant posed no medical threat to people in the area, even to those who did not evacuate.

The plant produced organic peroxides used in the production of plastic resins, polystyrene, paints and other products.

Arkema warned on Wednesday that there was a chance that organic peroxide could leak into flood waters.

"While it is possible that you may see an oil sheen or smell a slight odor, we anticipate the break down products would dissipate in the water or evaporate."

The breakdown happened because the plant's chemical refrigeration system lost power during the storm and the site's backup generators were flooded.

"As the temperature rises, the natural state of these materials will decompose," spokeswoman Janet Smith told The Associated Press earlier.

"A white smoke will result, and that will catch fire. So the fire is imminent. The question is when."

The local fire chief later told an ad-hoc press conference that of the nine refrigerated trucks used to store the chemicals, one had failed.

Read more: Is climate change to blame for Hurricane Harvey?

The plant was shut down before Harvey made landfall, but a skeleton crew of 11 stayed on before they were evacuated.

Crosby lies about 40 kilometers (25 miles) northeast of Houston, which has been hit with catastrophic flooding.

The Federal Aviation Administration closed airspace near the plant. Shares in the French chemical company fell 2.3 percent in trading on Thursday.