US President Donald Trump and Chinese President Xi Jinping are meeting at Trump's Florida resort, the so-called "Southern White House." Trade and North Korea are at the top of the agenda during two days of talks. 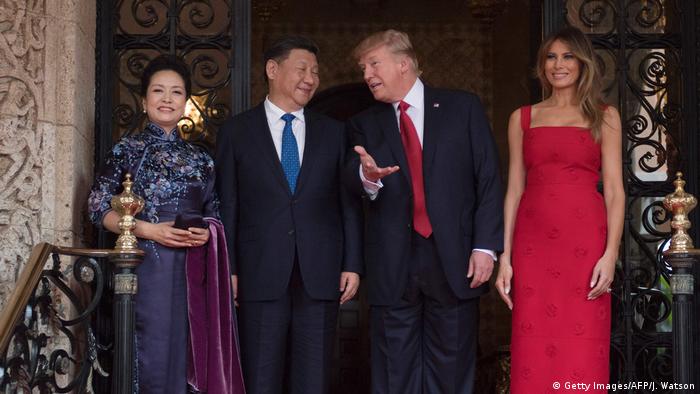 The two leaders arrived separately in South Florida on Thursday afternoon ahead of two days of talks at Trump's Mar-a-Lago resort, dubbed the "Southern White House."

The resort was reportedly chosen to give the summit a more relaxed feel, despite the backdrop of tensions. "Spouses will be there," said Matt Pottinger, a top White House expert on Asia tasked with planning the two-day summit.

The group will "have an opportunity to have tea together, meet some of their senior cabinet officials, so to speak, on both sides, and have a dinner" on Thursday before a series of meetings and a working lunch on Friday, Pottinger added.

For Xi, "the meeting is greatly significant in determining the direction of Sino-US relations in the new era, promoting the healthy and stable development of Sino-US relations at a new starting point, and promoting peace, stability and prosperity in the Asia-Pacific region and even the whole world," Chinese Foreign Ministry spokeswoman Hua Chunying said ahead of the talks.

Trump briefed reporters aboard Air Force One en route to the summit, saying that he thought China would "want to be stepping up" in trying to deter North Korea's nuclear ambitions.

North Korea's decision to fire a ballistic missile into the Sea of Japan on Wednesday was widely seen as a warning ahead of Thursday's US-China summit. It came as the US upped rhetoric on North Korea, suggesting it may take military action.

China, for its part, has expressed concern over US plans to deploy the Terminal High Altitude Area Defense (THAAD) system in South Korea. The US and South Korea say the advanced anti-ballistic missile system is meant to defend against North Korea, but Beijing argues the system could be used against China and upsets the military balance in the region.

On the US' trade relations with China, Trump repeated a key plank of his campaign. "We have been treated unfairly and have made terrible trade deals with China for many, many years. That's one of the things we are going to be talking about."

The US President went on to imply that there was a link between the "terrible" trade deals the US had made with China and North Korea's provocations. The two issues "really do mix," Trump said.

Tensions in the South China Sea

Shortly before Thursday's summit, a US think tank specializing in maritime relations reported that a Chinese fighter plane had been spotted on Chinese-held Woody Island in the contested South China Sea.

"This isn't a first, but it's the first time in a year," Greg Poling, director for the Asia Maritime Transparency Initiative (AMTI), said of the fighter jet deployment.

The US has raised concerns over Chinese building of outposts on islets in the resource-rich South China Sea, a key shipping lane for global trade.

A US official who spoke to news agency Reuters on condition of anonymity said the sighting of a Chinese aircraft on Woody Island did not raise any alerts. "It is already heavily militarized; no surprise we would be seeing military aircraft there," the official said.