The US president said he didn't think there'd be any problem with the border "wall" in Ireland. He was quickly corrected by his Irish host, who said any such barrier was the last thing the country needed. 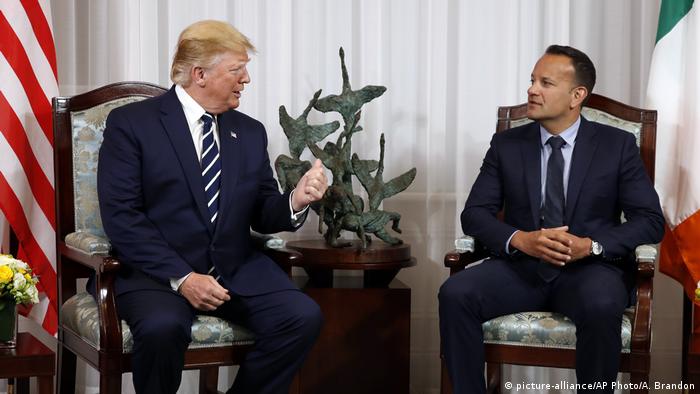 US President Donald Trump on Wednesday said he believed that Brexit would work out well from an Irish point of view — and raised eyebrows by evoking the idea of a "wall" across the island of Ireland.

Dublin has long insisted there must be no physical barrier at the frontier between Northern Ireland and the Irish Republic, and the president was immediately picked up on his faux-pas.

"Probably you will ask me about Brexit because I just left some very good people who are very much involved with Brexit, as you know," said Trump, who had arrived in Ireland after a three-day state visit to the UK. "I think that will all work out very well, and also for you with your wall, your border."

Trump then compared the border situation in Ireland to that of the US and Mexico, but he was quickly corrected on his wording by the Irish prime minister.

"I think one thing we want to avoid, of course, is a wall or border between us," said Leo Varadkar.

Many in Ireland are concerned that Britain's exit from the European Union — in particular, any no-deal scenario — could see the return of a hard border between the North and the Republic. The overriding fear is that this could stoke the sort of sectarian tensions and violence that have haunted Northern Ireland for decades.

Trump admitted that maintaining the present system — with no customs checks between the two EU neighbors — was Ireland's preferred scenario. "I know that's a big point of contention with respect to Brexit," said the US president. "I'm sure it's going to work out very well."

The existence of a "back-stop" guarantee to Dublin written into the Brexit Withdrawal Agreement was a major obstacle in UK Prime Minister Theresa May's attempts to win approval from British lawmakers for the agreement her government negotiated on leaving the EU. While visiting the UK earlier this week, Trump appeared to support a no-deal Brexit — the scenario expected to pose the biggest headache of all for Ireland.

Trump and Varadkar met at Shannon Airport in western Ireland, near to Trump's Doonbeg golf resort. The US president initially wanted to meet his host at the golf course, but the Irish government declined — initially suggesting a historic castle should instead be the venue.

The compromise location of Shannon was Ireland's first transatlantic airport and was the first real aviation gateway between the Americas and Europe. While the airport has a history of use by the US military, it was also used by the Soviet military until the 1990s, as Ireland had no formal relations with NATO until 1999.

Earlier in the day, the US president had attended commemorations for the 75th anniversary of D-Day in the southern English naval port of Portsmouth. He met briefly for dinner with German Chancellor Angela Merkel, who was also attending the event, before heading for Ireland.

The consequences of a no-deal Brexit would be much worse for Europe than for the UK, argues British historian Timothy Garton Ash in an exclusive interview with DW. (10.04.2019)

UK hopes trade deal with US could soften Brexit blow

While in the UK for a three-day state visit, US President Trump is dangling the possibility of a "big" post-Brexit trade deal. But can freeing up bilateral trade really alleviate the fallout of the UK's exit from the EU? (04.06.2019)

Britain said it would "not shy away from taking action" over post-Brexit trade tensions in Northern Ireland as it rejected EU proposals to resolve the standoff.

The 499-kilometer Irish border wasn't originally intended to be an international frontier. Since the Republic of Ireland was created, the situation at the border has mirrored the changing nature of Anglo-Irish relations.

The measures could halve customs paperwork and checks on meat, dairy and other food products coming to Northern Ireland.