Trump makes veiled threat against Comey, warns him not to 'leak' conversations

US President Donald Trump has warned ex-FBI chief James Comey not to "leak" details of their conversations. Engulfed in a media storm, Trump has also threatened to cancel the White House's daily media briefings. 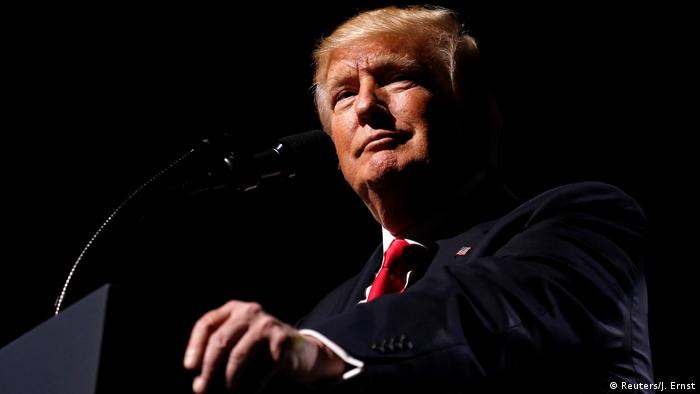 President Donald Trump warned ousted FBI Director James Comey on Friday not to "leak" details of their conversations, suggesting that they may have been taped and could contradict his account.

The president lashed out on Twitter Friday morning local time.

Comey has not commented since he was fired from the FBI on Tuesday.

However, the former FBI chief's dismissal has triggered days of turmoil in Washington.

In an interview with US news network NBC on Thursday, Trump revealed that he had asked Comey on three occasions whether he was under investigation as part of the FBI's probe into Russia's meddling in last year's presidential election and possible collusion with the Trump campaign team.

Comey did not confirmed Trump's account of the meetings. However, on Friday, the New York Time newspaper cited two aides of Comey's who said that Trump had asked the FBI chief to make a pledge of loyalty in January. Comey declined, offering instead "honest." When Trump pressed for "honest loyalty," Comey reportedly told him, "You will have that."

Earlier on Thursday, acting FBI Director Andrew McCabe told a Senate committee that Comey had always "enjoyed broad support" within the bureau. McCabe's remarks contradicted an earlier White House memo stating that Comey had lost the confidence of the FBI rank and file.

Critics have assailed Trump for leaving the fate of the FBI's probe into alleged election meddling by Russia highly uncertain and even accused him of intentionally seeking to jeopardize it.

Read more: The Comey affair: What happens now that Trump fired the head of the FBI?

Trump's lawyers on Friday moved to try and quash any links between the president and Russia, saying that a review of his last 10 years of tax returns do not reflect "any income of any type from Russian sources," albeit with some exceptions, such as income from the 2013 Miss Universe pageant that was held in Moscow. However, Trump's legal team did not release the tax returns, meaning they could not be independently verified.

On Thursday, the White House's deputy press speaker, Sarah Huckabee Sanders, was forced to answer for the administration's conflicting reports on Comey's dismissal.

Sanders also had to defend photographs leaked that day by the Russian news agency TASS that showed Trump meeting with Russia's top diplomat, Sergey Lavrov, and Russia's ambassador to the US, Sergey Kislyak, during an ad-hoc meeting at the Oval Office. Kislyak is at the center of the FBI's probe into links between Trump's former advisor Michael Flynn and the Kremlin.

The FIFA president and Council have prevented the re-election of the organization's top ethics officials. This shows that the FIFA boss has mastered the art of high-stakes politics, writes DW's Andreas Sten-Ziemons. (11.05.2017)