Opinion: A hint of Watergate

President Trump has allegedly fired FBI head James Comey due to his investigations in the Hillary Clinton email scandal. But he may have unleashed a political earthquake, writes DW's Miodrag Soric. 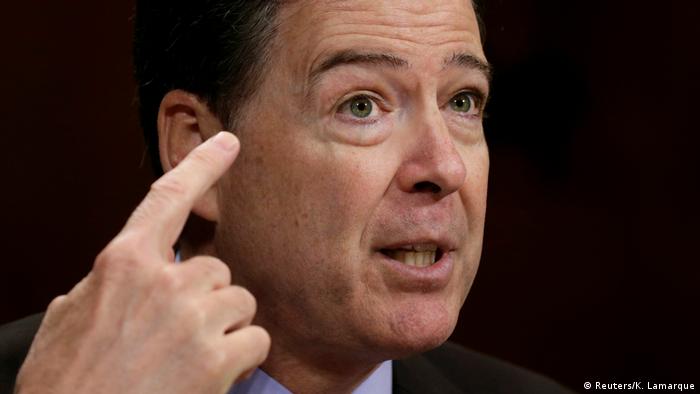 There has never before in American history been anything like this: The head of the White House has fired the head of the FBI at a time when he is leading investigations which may turn out to be dangerous to the president.  James Comey has been investigating attempts by Russia to influence the US election, the ultimate goal being to pave the way for Donald Trump to enter the White House and to undermine his political opponent, Hillary Clinton.

In recent weeks, the Trump administration has rejected all allegations that it cooperated with the Kremlin during the election campaign in 2016. Yet FBI investigations were still ongoing. To fire the FBI head before they had been concluded leaves a bitter political aftertaste. It is not only the Democrats who are afraid of the possibility that Donald Trump will appoint a new FBI director who will bring the investigations to a swift end. This would also bring to an end ever finding out the whole truth about any political influence exerted by Moscow.

US president in difficulties

Trump's decision has shattered the credibility of the political institutions in Washington. The reputation of the political class will reach new low levels, and with it will come an increase in political disenchantment. The president allegedly wants the FBI to have a fresh start. Trump's reason for firing Comey is his conduct regarding the Hillary Clinton email affair.

But no one is buying that, not even his own party members. After all, it was none other than Trump himself who praised Comey's conduct on that matter - after the investigations heavily affected his rival's election campaign in its final stages. Heaven forbid that there may have been ulterior motives behind firing the head of the FBI now, months later.

Comey's forced retirement could cause a political earthquake in Washington. The decision evokes memories of the Watergate scandal. It was in the early 1970s that Richard Nixon recalled a special investigator who had got wind of his sinister scheme. It didn't help: Nixon was forced to resign. He could not stop the truth from eventually getting out. Trump may be able to fire Comey, but the Democrats - and also some Republicans - will continue to try and find out if Trump's election campaign team had consultations with Russian representatives. So far there is no proof. But that could change.

The FBI chief has said it makes him "mildly nauseous" to think reopening a probe into Clinton emails tipped the US election. He also spoke to a Senate panel on Russia and Wikileaks' role in the election. (03.05.2017)

Thousands of migrants cross Guatemala in US-bound caravan 49m ago

Opinion: Shall I be mother? When doctors make the worst patients 18h ago