The FBI chief has said it makes him "mildly nauseous" to think reopening a probe into Clinton emails tipped the US election. He also spoke to a Senate panel on Russia and Wikileaks' role in the election. 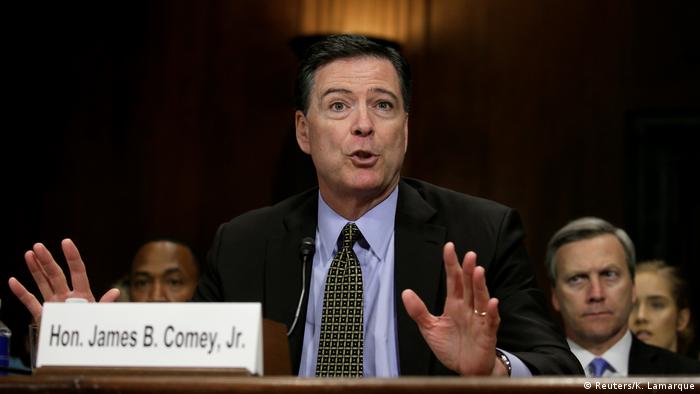 Federal Bureau of Investigation Director James Comey on Wednesday defended his decision to reopen a probe into Hillary Clinton's emails only days before the November election, but said it made him feel "nauseous" to think it could have swayed the outcome of the vote.

Comey informed Congress 11 days before the November election that the FBI had reopened an investigation into Clinton's use of a private server during her time a secretary of state only months after the country's top law enforcement body had closed the case and recommended no criminal charges.

Democrats have charged that Comey's decision to reopen the probe may have been politically motivated and helped swing the election in Donald Trump's favor.

"It makes me mildly nauseous to think that we might have had some impact on the election," Comey said during a four hour hearing before the US Senate Judiciary Committee. "To not speak about it would require an act of concealment in my view," Comey said. "Concealing, in my view, would be catastrophic."

Comey told the senate committee the FBI reopened the probe after agents discovered additional classified emails forwarded by Clinton aide Huma Abedin to her husband, who was not authorized to view them.

Not a political call

Comey said he felt he had to inform Congress at the time, after which news of the reopened probe was leaked to the press, because he had previously testified under oath that the investigation had been closed.

"I can't consider for a second whose political futures will be affected and in what way," Comey told the panel. "We have to ask ourselves what is the right thing to do and then do it."

Only two days before the election the FBI notified Congress that an examination of the emails on Weiner's computer did not change its determination Clinton should not face charges, but Democrats maintain that by that point the political damage had already been done.

In one of her first major remarks since the election, Clinton said on Tuesday that Comey, misogyny, Russian interference and a Wikileaks' dump of Democratic Party communications emails were in part responsible for her defeat in the election.

FBI confirms investigation of Russian interference in US election

US intelligence agencies in December accused Russian-backed hackers of interfering in the election to tarnish Clinton and the Democratic Party in a bid boost Trump's chances of victory.

The FBI launched a counter-intelligence investigation into Russia and the Trump campaign in July, but did not confirm the probe until March.

Democratic senators questioned Comey about why he made public the Clinton investigation but waited until after the election to divulge information about the Russia and Trump probe.

"It's still very unclear - and I hope director that you will clear this up - why the FBI's treatment of these two investigations was so dramatically different," Senator Dianne Feinstein asked

Comey said the Russia investigation at the time was in its early stages and classified, unlike the finished Clinton investigation.