US President Trump has invited Philippine President Duterte to Washington during a "very friendly phone call." The two also discussed Duterte's war on drugs - a campaign that has drawn international condemnation. 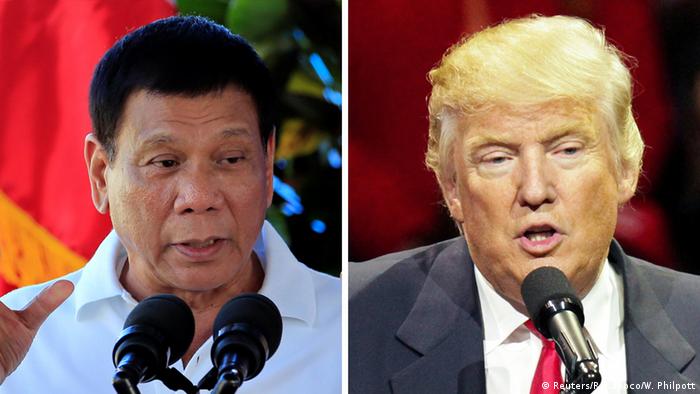 A police chief in the Philippines has been sacked following allegations of abuse directed at inmates. Concerns are mounting over President Rodrigo Duterte's war on illegal drugs. (28.04.2017)

The Philippine House of Representatives has approved a bill to restore the death penalty, 11 years after it was abolished. The government has called the measure "a vital tool" in Duterte's war on drugs. (07.03.2017)

Philippine President Rodrigo Duterte has lashed out at the EU, calling them "sons of bitches" after the bloc called for rehabilitation clinics for addicts. Duterte made his remarks during a speech to Chinese businessmen. (24.03.2017)

Philippine President Rodrigo Duterte's spokesman said on Sunday that US President Donald Trump expressed his interest in developing a "warm, working relationship" with the Philippine leader during a call.

Trump also invited Duterte to visit the White House and that he was looking forward to visiting the Philippines in November for an East Asia summit, presidential spokesman Ernie Abella said.

He did not say when the Washington visit is expected to take place.

The two leaders, who were both elected last year, also discussed regional security, including North Korea. Prior to the call, Duterte said he planned to urge Trump "not to play into [the] hands" of North Korean leader Kim Jong Un.

Shifting stance in war on drugs

Manila's comments on the call reflect the decidedly friendlier attitude Duterte has taken toward Trump compared to his predecessor President Barack Obama. The Philippine leader once said Obama should "go to hell" for criticizing his anti-drug crackdown.

Based on a White House statement about the phone call, Duterte received a decidedly less critical approach from the new US administration.

The leaders "discussed the fact that the Philippine government is fighting very hard to rid its country of drugs, a scourge that affects many countries throughout the world," the White House said in a statement on Saturday.

Duterte has faced international condemnation for his campaign against illegal drugs from international human rights groups and from the US and other countries for allegedly violating due process.

Philippine police have reported killing 2,724 people as part of Duterte's war on drugs, while many more were victims of extra-judicial killings. Authorities have insisted that the shootings were in self defense.

But not all leaders have criticized Duterte's campaign. Over the weekend, Southeast Asian leaders attending the ASEAN summit in Manila also expressed support for the war on drugs, including Indonesia's President Joko Widodo and Brunei's Sultan Hassanal Bolkiah.