Conan was injured as it helped track down "Islamic State" leader Abu Bakr al-Baghdadi in Syria last month. The dog was honored by the US president, his wife Melania and Vice President Mike Pence at the White House. 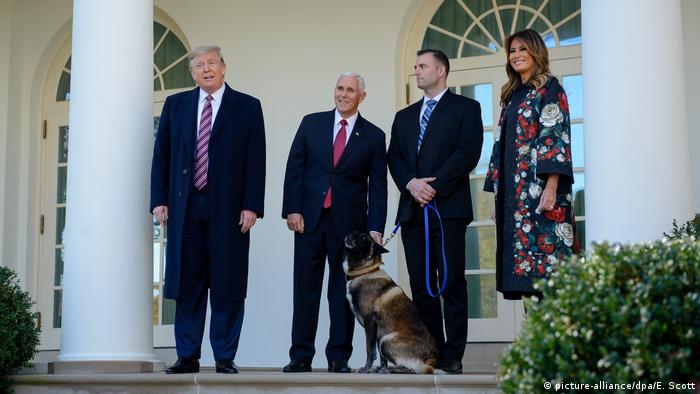 US President Donald Trump honored Conan the dog at the White House on Monday with a certificate and an award.

"This is Conan, right now probably the world's most famous dog," said Trump, standing on the steps to the White House garden together with his wife, Melania, and Vice President Mike Pence.

The president said Conan's award would be hung on the wall of the White House.

He described the dog, which is a Belgian Malinois, as the "ultimate fighter," a "tough cookie" and "very special."

The White House tweeted that Conan was "America's hero dog" and was already back at work.

The special forces members who carried out the raid that killed "Islamic State" leader Abu Bakr al-Baghdadi also met Trump on Monday, but they could not show their faces at a press conference.

The dog's identity had been a closely guarded secret until it was declassified by Trump, who retweeted a picture of the dog after the raid in Syria.

During the raid, Conan chased al-Baghdadi into a dead-end tunnel in his Syrian hideout, where the cornered IS leader detonated a suicide vest, killing himself and two children, according to the US account.

Conan was injured by the electric cables exposed in the detonation but appeared to have made a full recovery.

He was one of the world's most wanted men and news of Abu Bakr al-Baghdadi's death has been welcomed by a host of global leaders. But fears of revenge attacks have led several countries to issue security alerts. (28.10.2019)

President Recep Tayyip Erdogan said he "didn't want to make a fuss" over the capture, like the US had done following the Islamic State leader's death last week. The declaration came during a speech at Ankara University. (06.11.2019)