US President Donald Trump says he had an "absolute right" to share intelligence with Russia. However, Moscow-based media contradict reports that Trump revealed classified information to Kremlin emissaries at all. 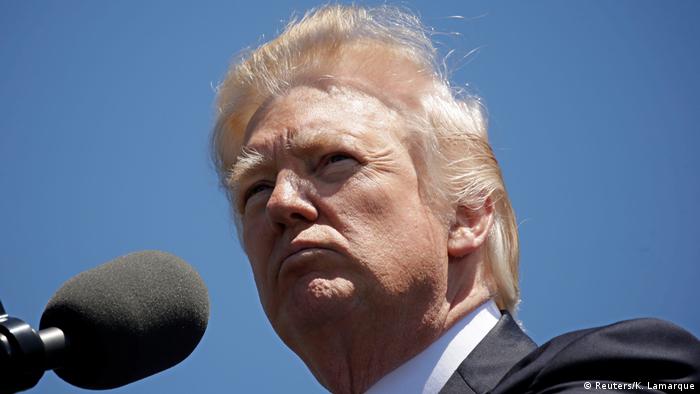 US National Security Adviser H.R. McMaster said on Tuesday that Trump in no way compromised his sources by sharing sensitive intelligence with Russian officials at the White House last week.

Speaking to reporters at a press conference at the White House, McMaster said the information shared in his conversation with Russian Foreign Minister Sergey Lavrov (right in photo) was "wholly appropriate."

McMaster demurred when asked if the information discussed was classified, but emphasized that Trump "in no way compromised any sources or methods in the course of this conversation," adding that "the president wasn't even aware of where this information came from."

The New York Times later reported that the information Trump shared came from, at least in part, Israel, though the White House declined to confirm the report.

The press conference came the same day Trump wrote on Twitter that he was acting within the privilege afforded by his position when he shared intelligence with Russian officials at the White House last week.

"As president I wanted to share with Russia (at an openly scheduled WH meeting), which I have the absolute right to do do, facts pertaining to terrorism and airline flight safety," Trump wrote in Tuesday's two-part tweet, abbreviating White House. "Humanitarian reasons, plus I want Russia to greatly step up their fight against ISIS and terrorism." Trump was using a common acronym for the Islamic State group, also commonly referred to as IS.

On Monday, intelligence sources told The Washington Post that Trump had revealed information about an operation against IS when Lavrov visited the White House.

And Maria Zakharova, a spokesperson for the ministry, left a dismissive post about the report on her Facebook page. "Guys, have you been reading the American newspapers again?" she wrote. "You shouldn't read them. You can put them to various uses, but you shouldn't read them. Lately it's become not only harmful, but dangerous, too."

McMaster had previously released a carefully worded statement on Monday in which he denied that Trump revealed "intelligence sources or methods" to Russian officials in the White House, though he did acknowledge that the president and Lavrov had "reviewed a range of common threats to our two countries, including threats to civil aviation." Without specifying which elements he considered untrue, McMaster added: "There's nothing that the president takes more seriously than the security of the American people. The story that came out tonight as reported is false."

However, an anonymous US official told the Associated Press that following the meeting the president was informed that he had violated protocol. White House officials spoke with the National Security Agency (NSA) and the CIA to inform them that Trump had shared secretive information.

Since the fallout, some politicians in Washington have called on Trump to release transcripts of his meeting. Chuck Schumer, the Senate's top Democrat, said that if the president has "nothing to hide," he'll hand unedited versions of the transcripts to the House and Senate intelligence committees.

Monday's report became the latest in a wave of White House gaffes, flubs and bumbles. Aides must frequently put out metaphorical fires and plug repeated damaging or embarrassing leaks. This time around, the Post reported, the intelligence came from a US ally that hadn't authorized Washington to share it, a development that could shatter essential trust for intelligence and counterterrorism cooperation.

"Revealing classified information at this level is extremely dangerous and puts at risk the lives of Americans and those who gather intelligence for our country," Democratic Senator Chuck Schumer said. "The president owes the intelligence community, the American people and Congress a full explanation."

Trump often attempts to deflect criticism by lampooning the US's intelligence services, law enforcement and media. Last week, the president threw his administration into turmoil by taking the virtually unprecedented step of firing his FBI director, James Comey, who had overseen investigations into his campaign's possible collusion with Russian officials to alter the course of the US's 2016 election. During the campaign, Trump repeatedly criticized his Democratic rival, Hillary Clinton, for her handling of classified information as secretary of state and even led chants calling for her imprisonment.