With ever more people living in urban centers, food security — and quality — is becoming a pressing issue. In Germany, cities are increasingly taking the task of producing organic products to a hyperlocal level. 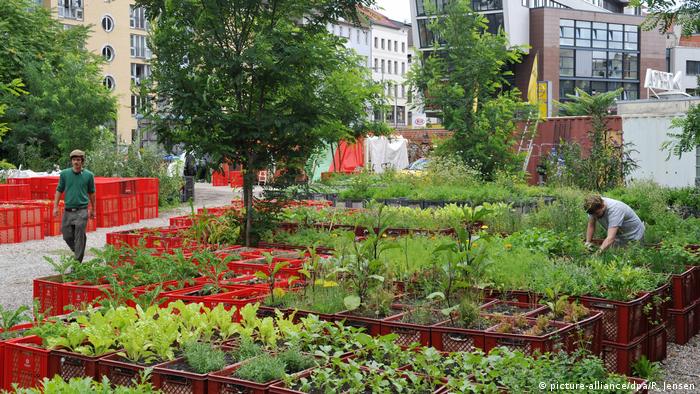 In Nuremberg, every first-grader starts the year with a gift: a yellow plastic lunchbox filled with healthy food.

The gift, refilled daily, is part of a city initiative to increase the share of local, organic food in public institutions — not just daycare centers and schools, but also retirement homes, hospitals, correctional facilities and administrative centers.

As part of Biostädte, or organic cities, it joins a network of municipalities across Germany — including Munich, Bremen and Karlsruhe — working to make food production healthier and more sustainable. 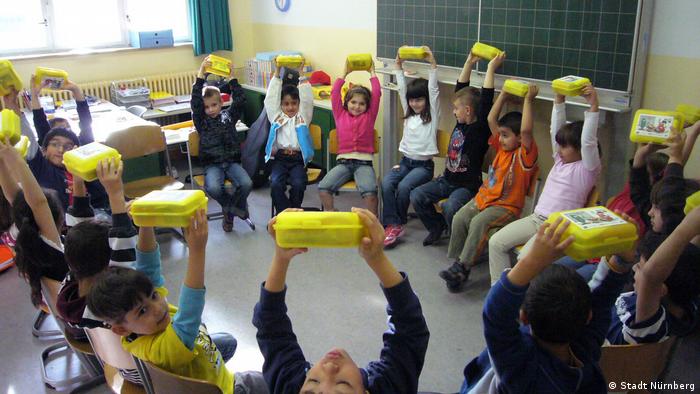 To mark their first day of school, first-graders in Nuremberg are given a flashy new lunch box — filled with organic food

In other cities like Berlin, Cologne and Kiel, similar food councils are introducing urban and community-supported agriculture, which includes the greening of new buildings and the transformation of uncontaminated industrial land into community gardens.

Their plans also include projects for car-free, solar-powered districts where edible plants grow on and around buildings.

Read more: From gray to green: Urban farming around the world

Local citizens are being encouraged to cultivate useful crops, using public green areas in their neighborhoods to plant rows of potato plants or fruit trees. Doing so gives municipal coffers a break: it costs less than designing and maintaining public green spaces with ornamental plants.

These urban agricultural spaces are intended to become focal points where food is produced, processed and traded.

In Berlin — with its 3.6 million inhabitants and virtually no local agricultural land — the need for such initiatives focusing on high-quality, sustainable food is particularly high.

To meet these goals, Berlin has recently created the House of Food foundation, to help the city make the transition to organic products — without a budget increase, and if possible, without subsidies.

The city is following a model first created by Copenhagen, where in 2007 the Danish capital brought together cooks, food experts, teachers and designers to offer advice and cooking courses.

Today, roughly 70 percent of the food in Copenhagen's city-run kitchens is organic; in smaller institutions, like kindergartens, that figure is as high as 90 percent.

Taking the lead in Germany

In Nuremberg, the city wanted to lead by example: every February, Biofach, which according to organizers is the world's largest trade fair for organic products, takes place in the northern Bavarian city.

At this year's Biofach, increasing public demand for organic products is in the spotlight: The organic food market has grown by about 6 percent in Germany over the past year, making up about 5 percent of the total food market there.

Since 2003, certified organic caterers have been providing meals to daycare centers and schools in Nuremberg, and leading cooking workshops for students, teachers and caretakers.

"The proportion of organic ingredients has continuously increased — and usually without any increase in price," said Werner Ebert, head of the environment and health department at BioMetropole Nürnberg, an organization that works on the initiative with the city.

In the meantime, some of the facilities have begun cooking meals themselves, he added. "This fresh food has more nutrients, and is cheaper than having meals delivered."

By sticking to seasonal products and reducing the amount of meat on offer, the city is able to keep costs low.

"Back in 2003, organic initiatives were a fringe topic — but today we're seeing plenty of support for our work," Ebert told DW.

Those interested in the organic movement have the chance to visit farms in the region twice a year, though the "Bio on Tour" initiative, while organized trips abroad allow citizens to see how other regions in Europe are introducing sustainability into their lives.

Even Nuremberg's world-famous Christmas market has made the move to sustainability, with many stands offering products with quality organic labels — some coming directly from the producer.

As Ebert points out, organic efforts don't end at the city limits. For example, the city provides financial support for a traditional apple orchard project in the nearby Hersbruck Mountains, which produces bottles of Pom200, an organic apple juice.

'Nutritional change begins in the city'

"Civic space plays an important role in the societal debate on nutrition," said Philipp Stierand, an expert on nutrition and cities. "It's all about regionality and food origins."

Urbanization, he points out, takes a serious toll on the environment: arable land surrounding cities is built up and resources are depleted, while conventional industrial agriculture can deplete the soil, damage ecosystems and contribute to climate change with air pollution produced by long shipping routes. 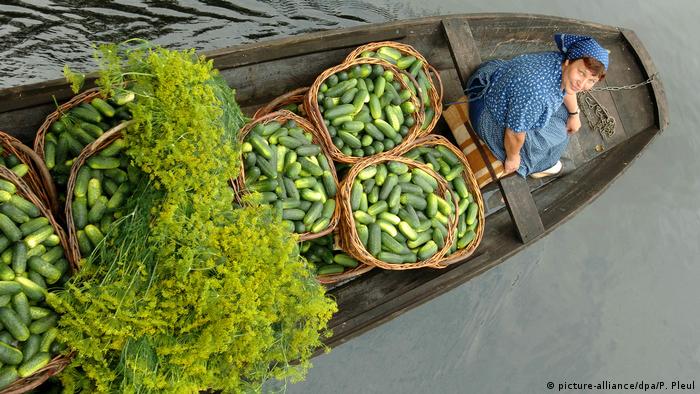 Locally grown foods often have a much smaller carbon footprint

Conventional agriculture, believes Stierand, is not sustainable in the long run — water quality, biodiversity and climate change must be made a priority.

At the same time, society is faced with the task of ensuring food security, both in terms of quantity and quality. Cities are increasingly addressing food-related issues like obesity and allergies, and citizens are demanding that they have a say in where their food comes from.

Though the majority of the global food supply is still organized at a national and global scale, Stierand believes the regional share — be it local markets, corner stores or home delivery of organic products — will steadily increase, with the local food supply becoming more diverse.

"Nutritional change begins in the city," said Stierand. "These nutrition councils, being set up all over Germany, are a clear signal that consumers are looking for — and organizing — local alternatives to supermarkets and discount stores."

As Greece flounders under debt and austerity, green-fingered activists are overtaking unused spaces to feed those in need - and build a more sustainable future. (12.07.2017)

Food myths: the good, the bad and the ugly

Our perception of food keeps changing. Foods can be damned as bad one day and hailed as life-prolonging the next. Or vice versa. Here's a look at some dos, don'ts, and maybes … (23.12.2014)