Training the Champions of the Future

By implementing the latest technology and scientific methodology, the German Football Association hopes to build a team of highly trained youngsters capable of competing for international honors in the future. 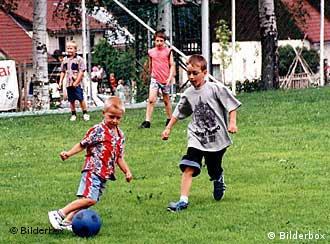 The new hi-tech training scheme aims to develop the skills of Germany's stars of the future.

Regardless of whether Germany succeeds in this year's European Championships, the future is already looking bright for the next generation of stars learning the skills that may see them emulate the likes of Michael Ballack and Oliver Kahn. The German Football Association (DFB) is so focussed on the vision of future glories that they have introduced a revolutionary new method of talent spotting which embraces scientific technology to locate talented stars of the future as they evolve and then help develop their individual strengths.

The DFB is collaborating with scientists from the German Sports College in Cologne on the pioneering project which monitors the soccer skills of promising young players aged between 11 and 16 who have yet to sign for a professional club.

The project implements the use of cameras and scientific test methodology to assess and categorize skills such as dribbling, ball control and acceleration to create a personal achievement profile of each player which the scientists then file in a national database. It is hoped that the data which is collected will help the DFB spot the next Sebastian Deisler wherever he -- or indeed she -- may be in Germany and then tailor a specific training regime to the player's own strengths and weaknesses.

The research project was commissioned by the DFB in order to help scouts find the next generation of German players. The scouts, more used to standing around rural pitches on rainy weekends while following up rumors of a rising star, are now being asked to expand their own skills by implementing the new technology into their jobs.

The new approach to monitoring and training begins with a highly precise talent test which the potential young players have to take to advance further in the scheme. Armin Friedrich, a trainer with the DFB, told DW-WORLD why the talent test needs to be so precise.

"Precision is crucial because we need to compare 22,000 players from 387 DFB's soccer bases. If the test was any less accurate, it would be useless as a tool for scientific comparison."

Once the players have been assessed, those chosen as the ones most likely to progress with the right training are introduced to the individual training programs specifically designed to their own needs and requirements by the scientists at the Sports College. Stefan Lottermann, one of the scientists who helped develop the technology, explained the questions the team must ask themselves before training can begin.

"What indicators of talent are there in the different age categories? We have players aged between 11 and 16 in our various bases, so what we want to find out is: how should we be training an 11-year-old so that he has a chance of building a career as a top player in the first or second league?"

The physical tests begin with apparently simple ball skills, such as keeping the ball in the air and touching it at least five times in a given time, and playing a number of "wall" passes within a set area. It sounds easy but the first round of skills tests is harder than it sounds: eight out of ten players fail the first round.

The next phase concentrates on speed and physical strength where the cameras are employed to monitor a players movements and flexibility. Electronic sensors are attached to areas of the body and the data is fed into a computer. The scientists can then see how to improve the mobility of the player and what exercises should be introduced into his training to strengthen the necessary muscles.

Armin Friedrich and his team of trainers take time to work with the players on a one-to-one basis and when the testing is over, the trainers keep an eye on their charges when they return to their clubs. "As DFB trainers, we visit the clubs and organize further training with the local coaches based on the latest information gathered via practical experience and scientific research. That way we have a very hands-on relationship with the clubs."

The test phase ends with a game. The players are encouraged to dribble the ball when they want but the focus is on a passing game where the ball pings between the players with each touching the ball as little as possible while remaining in possession, creating chances and scoring goals. All this is done on a specially designed pitch which is smaller than usual and which allows the players' skills to be assessed at closer quarters.

Once all the results are in, the data is then assessed at the center in Cologne. The trainers will then take the results and continue to work with the selected players and their club coaches to improve their skills. The hope is that come 2010, some of the players in the scheme will help Germany win the World Cup in South Africa that year.

The German-Dutch classic did not disappoint on Tuesday night, as the old rivals fought a spirited Group D match ending in a 1-1 draw. (June 15, 2004)

The so-called "Group of Death" puts three top teams up against each other in a fight to avoid the second elimination spot as it looks inevitable that Latvia will claim the first at the end of the group stage.

The Road to Portugal

Since losing to Brazil in the World Cup final in 2002, the German soccer team has been working towards its next shot at international glory at the European Championships this summer.

All the teams, all the players, all the news from the European soccer championships being held in Portugal during June and July.