Tokyo Olympics: A month to go, protesters intent on postponing games | Asia | An in-depth look at news from across the continent | DW | 24.06.2021 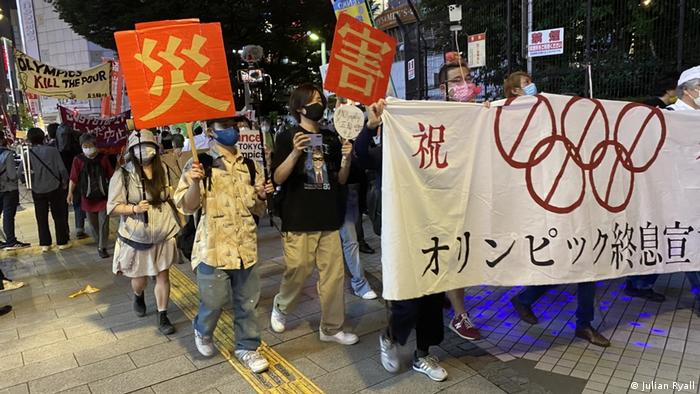 Atsuko Nagayama is so angry that she is physically shaking. Standing with around 250 protesters in front of the headquarters of the Tokyo metropolitan government, she is holding a simple homemade placard with the words: "Cancel the Olympics."

"It is much too dangerous to go ahead with the gamesbecause we know that there are many variants of the coronavirus already in circulation in Tokyo," Nagayama told DW.

"I want the government and the International Olympic Committee to come to their senses and realize the danger that we are in," she added.

Nagayama, who is 60 years old and lives in Saitama Prefecture, just north of Tokyo, traveled to the demonstration in the capital on Wednesday evening.

The Tokyo Olympic and Paralympic Games are set to become the first-ever to take place amid a global pandemic, after being postponed for a year amid earlier infection waves.

The protest was timed to mark exactly one month out from the opening ceremony at the new National Stadium. 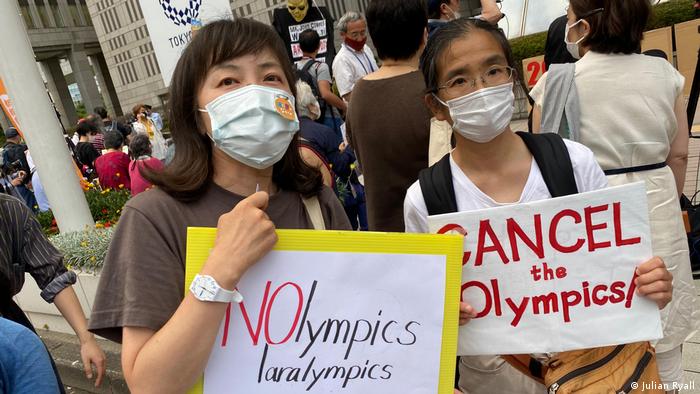 Arranged by a coalition of more than a dozen groups opposed to the games, the protesters met outside the towering block in the Shinjuku district of Tokyo before marching to a plaza close to the busy Shinjuku station. Police officers followed them closely.

The protesters represent some of the 60% of Japan's citizens who say they disapprove of the games going ahead, according to the results of a latest poll. This is down from a high of 84% reported in late May.

The Tokyo Organizing Committee of the Olympic and Paralympic Games is adamant that the games will go ahead despite the continued presence of the virus.

On Wednesday, Japanese health authorities reported 1,797 new cases of the virus nationwide, with 619 of these recorded in Tokyo — an increase of 118 from one week previously and above 600 for the first time since May 28. Authorities also reported 58 more deaths from the virus across the country.

A report by a panel of experts set up by the health ministry warned on Wednesday that new cases of the coronavirus have stopped falling and will likely begin rising again. 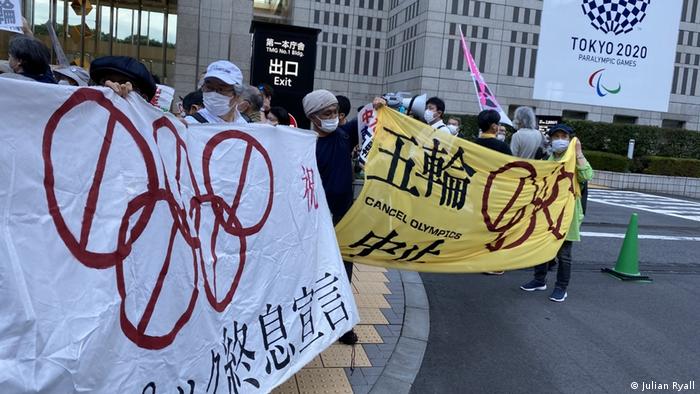 Hundreds protested against the Olympics in Japan's capital city Tokyo

The experts are particularly concerned about the rapid spread of the Delta variant that is believed to be as much as 90% more contagious than previous variants.

Experts outlined that it could account for nearly 69% of all new infections across the country by July 23, the opening day of the games.

In a bid to clamp down on the spread of the virus, the government announced a 10,000-spectator cap during events in the national stadium and further caps at other venues.

On Wednesday, while anti-games protesters took to the streets, the Tokyo Olympics organizing committee released a set of stringent guidelines in a bid to stop the virus from spreading at the event.

Ticketholders will have their temperature checked before entering a venue. They will not be allowed to eat or drink in groups and will not be permitted to buy or bring alcohol into stadiums. Face masks will be mandatory for sports fans in venues.

Additionally, spectators will not be permitted to shout or cheer athletes and must leave the venue immediately after an event.

Anyone who fails to comply with the rules will be refused entry or ejected from venues, the organizers added. 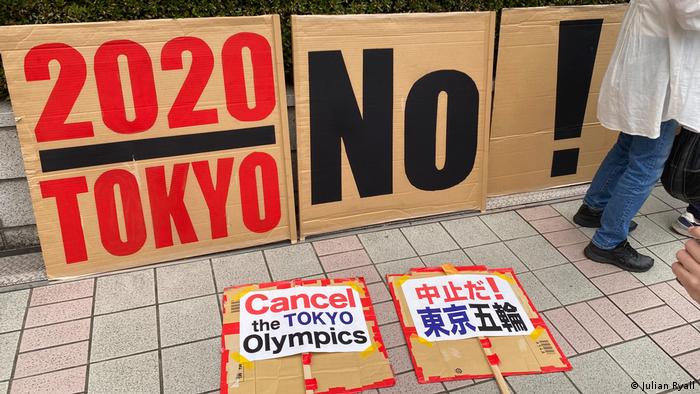 Opposition to the games remains

But the new rules have not quelled the backlash from some in Japan.

Haruo Ozaki, the chairman of the Tokyo Medical Association, said on Tuesday that it was "incomprehensible " that the Japanese government, the International Olympic Committee and the national organizing committee are forging ahead with the games regardless of the dangers posed by a global pandemic.

On June 18, the Tokyo Medical Association joined other medical bodies to submit a joint plea to the government, requesting that the games be canceled or held without any spectators.

At the protest, Nagayama explained that she views Japan's continual commitment to the games as a clear disregard for medical advice: "The government is ignoring what the scientists and the medical experts are telling them," she said.

"If the games go ahead, then bad things are going to happen. The government is only thinking about money, but we believe that the lives of ordinary people are much more important," she told DW.

The Tokyo Olympics, at any price?

Akiyoshi Funaki, a retired teacher from the city of Yokosuka, immediately to the south of Tokyo was also protesting. He voiced another objection to the Tokyo Games: "Stop spending money on the Olympics and spend it on education and children, the future of the nation."

The cost of the games is set to have risen by around $3 billion, following the unprecedented postponement from 2020. But it is also expected to lose out on millions of revenues after ticket sales were slashed, including a ban on sales to international fans.

Using a megaphone aimed at the building, he called on officials of the administration of Governor Yuriko Koike — who was admitted to hospital suffering from exhaustion on Tuesday — to come down and explain her policies on the games to the demonstrators.

"What are you thinking?" he yelled into the megaphone. "Our children should be the priority. It's not too late to cancel the Olympics. Do the right thing."