Hungary has begun building a fence on the country's border with Serbia to keep migrants out. Prime Minister Viktor Orban's right-wing government is staunchly opposed to most immigration from outside Europe. 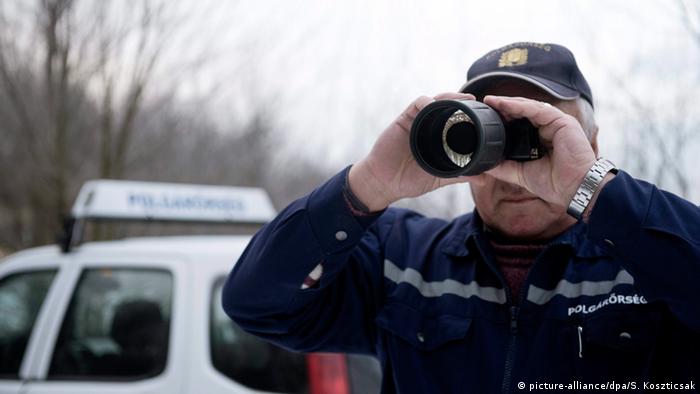 On Monday, Hungarian soldiers began erecting a highly criticized fence on the border with Serbia to keep out migrants. A joint statement from the interior and defense ministries announced that the 150-meter (490-foot) "sample section" would run from the outskirts of the town of Morahalom, about 180 kilometers (110 miles) south of the capital, Budapest.

"There has been no better idea to resolve this untenable situation," said Zoltan Nogradi, the mayor of Morahalom and a member of the governing Fidesz party, which is often criticized as hostile to migrants. The United Nations and other agencies have protested a xenophobic billboard campaign by the government, as well as a questionnaire sent to voters linking migration to terrorism.

About 80,000 migrants and refugees have reached Hungary so far this year - up from 43,000 in all of 2014 - with nearly all coming from Serbia. Roughly 80 percent of them have left behind war zones in countries such as Syria, Iraq and Afghanistan.

Many request asylum in Hungary, which lies at the outer edge of the European Union's theoretically passport-free Schengen zone, but then quickly move on to more welcoming countries. However, Hungarian officials fear that their fellow EU members might send migrants back if they catch them, as the country would be their first known point of entry into the European Union.

Foreign Minister Peter Szijjarto had previously said the 4-meter-tall fence would first go up in the eight to 10 areas "most exposed to the immigration pressure" along the 175-kilometer (110-mile) border with Serbia. The plan, announced by right-wing populist Prime Minister Viktor Orban's government last month, triggered concern both in Serbia and the European Union and verbal disapproval from German Chancellor Angela Merkel.