Time for a new European politics of solidarity

As the financial crisis continues to unfold, the most blatant common characteristic is the failure of Europe's leaders to find an adequate response to tackle the problem, says Abraham Newman. 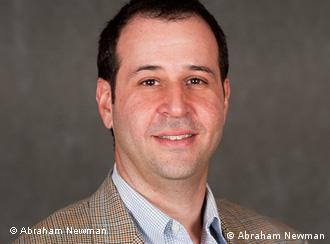 The European response to the financial crisis has been halting and half-baked. Leaders from Germany and France repeatedly refused to commit to specific policies only to adopt them days or weeks later as the cost of inaction multiplied. This has undermined credibility in the European policy-making process and threatened the region's economy.

It is time for Merkel and Sarkozy to reignite the cause for Europe through a new politics of solidarity. Such a grand strategy would acknowledge European member states' collective contribution to the crisis while at the same time prepare national electorates for the necessary sacrifices to guarantee the region's long-term financial stability.

Since the first ripples of the global financial crisis reached European shores, the search began for culprits - greedy banks, bloated welfare states, irresponsible governments. The German leadership, for example, has latched on to several of these, raising the specter of moral hazard to justify their delayed response. While there were certainly bad actors that peddled risky loans or took on too much debt, these scapegoat narratives ignore the larger systemic nature of the uniquely European dimension of the crisis.

This European dimension is fundamentally rooted in policy-making around the euro, which allowed bad actors to take advantage of a liquidity bubble. The bubble had a virtuous affect across the continent during the boom years and at the same time laid economic bombs in both Europe's core and periphery.

So what happened? As part of the grand bargain that created the euro, the European Central Bank focused its policy-making attention on containing inflation as had long been the focus of the German Bundesbank. International credit rating agencies then extended Germany's stellar rating across the euro-members. Countries from Italy to Greece got a euro-bonus, in which interest rates fell and debt offers abounded. This set up a liquidity circulatory system in Europe whereby banks from core countries lent money to the periphery and the periphery spent the money on goods from the core.

Think German banks that gave loans to Greeks that then turned around and bought BMWs. Everybody won.

Until everybody lost. As the financial crisis hit, the system seized up and symptoms broke out across Europe. Investors scrutinized bank holdings, leading to major banking crises. Governments (e.g. Ireland) responded by bailing out those banks, transforming a private debt crisis into a sovereign debt crisis. In other countries, similar scrutiny undercut bond markets, forcing governments (e.g. Greece) with large outstanding debt into a different path to a sovereign debt crisis.

Although the crisis was seemingly contained in the periphery, much of the bad debt (public and private) was held by banks in the core. Moreover, export-driven markets had racked up record growth as European buyers in the periphery went on a debt splurge. As the virtuous debt cycle ended and a new era of austerity set in, export destinations within Europe shriveled on the vine, threatening growth in the core and forcing German companies, in particular, to look increasingly toward Asian markets. With growth slowing in Asia and in turn Germany, the prospect of an Eastern escape dimmed.

While it is easy to point fingers, European leaders need to reframe the sources of the crisis in a way that makes clear the collective responsibility for it and the solidarity needed to overcome it.

The crisis has brought in stark relief several important lessons about European policy-making that present both difficult challenges for the Union and possible opportunities going forward.

First, national interests matter and are in flux. For a buoyant period of the late 1990s and early 2000s, European institution building and unprecedented market integration initiatives spearheaded by the Commission softened the edges of apparent Realpolitik.

In the wake of the crisis, however, Germany and France have reasserted themselves as dominant players. Unfortunately for Europe, the European project has lost significance among Germany's policy elite as the central driver of foreign economic policy. More unsettling perhaps, no clear grand strategy has replaced this Einbindungspolitik (German foreign policy tenet of engagement - the ed).

Given the heavily-fragmented nature of checks and balances in German politics, the political elite seems to be buffeted by a cycling of priorities from regional elections to Chancellory infighting. The end result has been a series of policy reversals and costly delay.

Second, mixing democracy and fixed exchange rates is a dicey proposition. When a debt crisis hits, governments have to choose an adjustment path. The euro effectively takes currency depreciation off the table for countries like Greece or Ireland. Instead they have imposed intense deflationary measures that reduce wages and government outlays, which have real consequences for the lives of ordinary citizens. This creates a particularly destabilizing situation for democratic societies as governments lose popular support and civil unrest threatens the normal political process.

Third, and finally, the crisis underscores the difficulty of having a monetary union without true fiscal union. Given the limited budget authority of the European institutions, they are not yet in a position to respond effectively to such a crisis.

Compounding this problem, individual member states can take risky fiscal decisions and freeride on the backs of larger economies. The recent discussion of a true eurobond, however, offers a glimpse of hope. Long taboo in the halls of Berlin and Frankfurt, they have started to gain traction. It is these seemingly small, gradual changes that could set the stage for a broader fiscal union.

A new politics of solidarity?

Given the scale of the crisis and the policy-making difficulties revealed by it, European leaders will have to sell their populations on a series of tough political choices - fiscal union, tax payer funded bailouts of other member states.

To do this, the political elite in the core, particularly Germany, should develop a new politics of European solidarity. This would acknowledge the shared contribution made by the core and periphery to the crisis as well as the tremendous benefits to both in returning to a growth trajectory. Merkel must shift from a rhetoric of moral hazard by profligate neighbors to a grand strategy that commits Germany to ending the regional crisis even if that includes unprecedented bailouts of other member states.

This strategy should educate the German electorate about collective responsibility for the crisis as well as persuade voters of the needed sacrifice to right the European ship. Given the possibility of a double dip recession in the US and slowed growth prospects in emerging markets, German society depends on a strong and prosperous region.

At the same time, such a policy announcement could send a signal to investors that uncertain European policy-making has come to an end. While finger pointing and demands for growth-crushing austerity are politically easy strategies for Germany in the short term, an every-person-for-himself strategy will risk harming the core's banking sector, export economy, and long-term economic growth.

A revitalized Einbindungspolitik, then, makes sense for Germany not because of geo-historical reasons but for its economic stability.