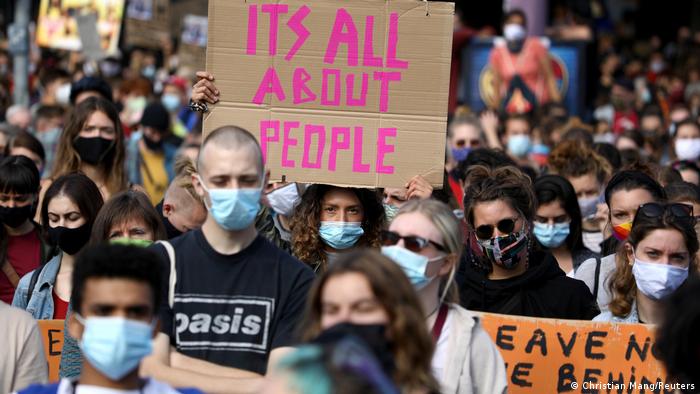 Thousands of people marched through the streets of Berlin on Sunday to call on Germany to take in more migrants currently being held in Greece, many of who were made homeless after fires ripped through the country’s largest refugee camp.

Protesters in the German capital held signs bearing sayings such as "We have a space" and "Leave no one behind."

Demonstrators demanded greater action from Germany and said the federal government should not block individual states or municipalities from taking in refugees on their own, an offer that several parties have made.

Police said some 5,000 people turned out for the march, which was organized by a number of human rights organization

Similar demonstrations also took place in the German cities Cologne, Munich, and Leipzig, as well as in Paris, France.

Only families with children accepted

Over 12,000 people in Greece were left without shelter after fires ravaged the Moria refugee camp on the Greek island of Lesbos earlier this month.

The Greek government said the fires were started by a small group of Afghan migrants in protest of coronavirus lockdown measures imposed at the camp.

Thus far, around 9,000 individuals have been resettled at a new temporary site.

Germany’s government last week said the country would accept around 1,500 migrants consisting of 408 families with children.

The accepted migrants, who are being held on various Greek islands, have already been granted protected status in Greece.

Germany had initially said it would take in up to 150 unaccompanied minors as part of a European-wide initiative.