Islamist fighters have overrun Iraq's second-most populous city, prompting the prime minister to request a state of emergency and appeal for volunteer fighters. The US and UN both voiced concern, as thousands fled Mosul. 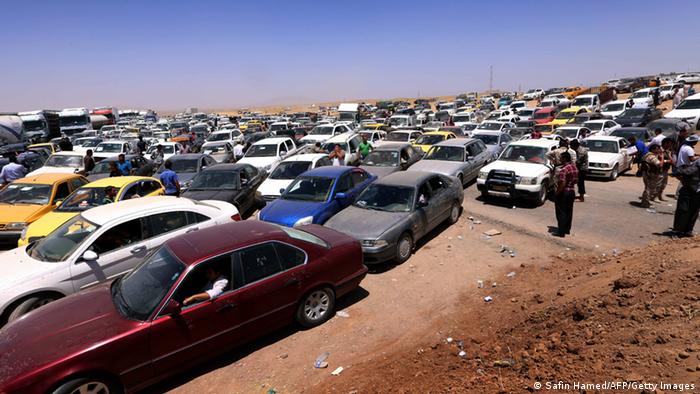 Iraqi Prime Minister Nouri al-Maliki on Tuesday vowed to reclaim control of Mosul, with a population of more than a million people, after militants from the Islamic State of Iraq and the Levant (ISIL) seized the capital of Nineveh province.

"The government will never permit Mosul and Nineveh to remain under the shadow of terror and the terrorists," Maliki said after an emergency cabinet meeting on Tuesday. He also called for parliament to officially declare a state of emergency and appealed for the arming of citizens willing to fight ISIL forces, according to domestic media reports.

Maliki, re-elected in April after promising to bring Iraq's insurgency under control, also threatened deserting soldiers with court-martials, after reports out of Mosul suggested that much of the city fell without a fight.

"The army forces threw away their weapons, changed their clothes, abandoned their vehicles and left the city," fleeing resident Mahmud Nuri told the AFP news agency. "We didn't see anyone fire a shot."

Correspondents in Iraq reported that thousands of people were fleeing Mosul, many heading north towards the semi-autonomous Kurdish region of Iraq. Soldiers complained that they were ill-equipped to fight back.

"We can't beat them. We can't," an Iraqi officer told Reuters. "They are well trained in street fighting and we're not. We need a whole army to drive them out of Mosul." Militants seized control of key facilities throughout the city, including security buildings and a prison. Police sources said around 1,000 convicts were set free.

ISIL fighters, seeking independence for Sunni-majority areas of western Iraq and Syria, have controlled nearby Fallujah for months. The group, which split with al Qaeda after months of wrangling over association earlier in the year, is also heavily active in Syria's civil war.

US 'will provide assistance'

"ISIL continues to gain strength from the situation in Syria, from which it transfers recruits, sophisticated munitions, and resources to the fight in Iraq," the US State Department said in a statement. "It should be clear that ISIL is not only a threat to the stability of Iraq, but a threat to the entire region."

UN spokesman Stephane Dujarric said Secretary-General Ban Ki-moon was "gravely concerned" by the situation in Mosul and other parts of the country, before stressing that Ban believed the threats against Iraq "can only be addressed on the basis of the constitution and within the democratic political process."