Al Qaeda has claimed no link to the militant Islamic State in Iraq and the Levant in Syria's civil war. The fight remains deadlocked, with secular rebels defending themselves against regime forces and "allied" Islamists. 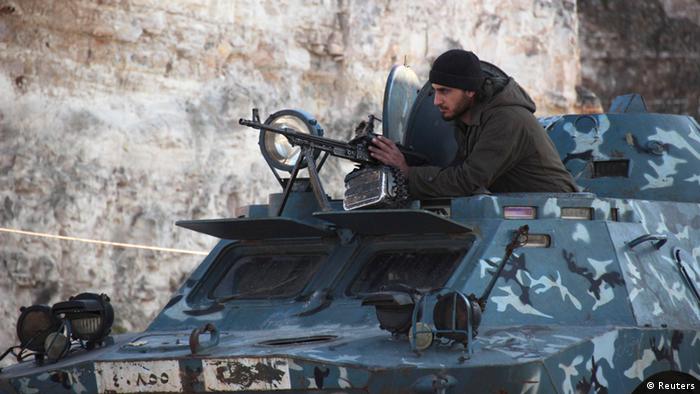 After months of rebel infighting, al Qaeda disavowed the Islamic State in Iraq and the Levant (ISIL). The switch could help convince Islamists to redirect their efforts toward unseating President Bashar al-Assad rather than fighting other rebels, and shift the strategic balance at a time when government forces have become increasingly active on the battlefield.

In a message on jihadi websites on Monday, al Qaeda's general command announced that the syndicate "does not have an organizational relationship with (ISIL) and is not the group responsible for their actions."

ISIL has fought battles with other Islamist insurgents and secular rebel groups, often triggered by disputes over authority and territory. In January, several rebel groups announced a joint campaign against the Islamists.

Some rebels had initially welcomed jihadists to the fight in Syria, valuing their battlefield experience, funding and weapons. However, ISIL has drawn the ire of many for imposing harsh Islamic strictures - including bans on music and smoking - as well as detaining and torturing rebels and civilians, and seeking to consolidate its power in areas under its control.

On Monday, al Qaeda's statement criticized ISIL's tactics, urging fighters to "be part of the nation" and avoid "any action that could lead to the oppression of jihadists, Muslims or non-Muslims." According to al Qaeda, jihadists must "not rush to announce emirates and states ... and impose them on people."

Recent fighting between rebel groups and those affiliated with ISIL - some of the bloodiest in the war so far - has undermined the uprising against Assad and dismayed nations pushing for peace talks between the government and opposition. Rebel-on-rebel violence has killed more than 1,700 people this year alone, according to the UK-based monitoring group the Syrian Observatory for Human Rights.

ISIL and its Iraqi predecessor have proved a source of controversy among Islamists for many years. The group's strict inerpretation of Islamic law - and accompanying harsh punishments for violations - alienated many in its strongholds in Iraq's western Anbar province during its period of control there after the 2003 US-led invasion, as did its use of attacks that killed many civilians.

The group has used similar methods in Syria. On Sunday, an amateur video on the Internet by the Syrian Observatory for Human Rights, which said it depicted ISIL fighters publicly decapitating a man accused of fighting for the government.