Iraq's prime minister has asked parliament to declare a state of emergency after insurgents effectively seized control of the city of Mosul. He said the government would arm civilians who volunteer to fight in the city. 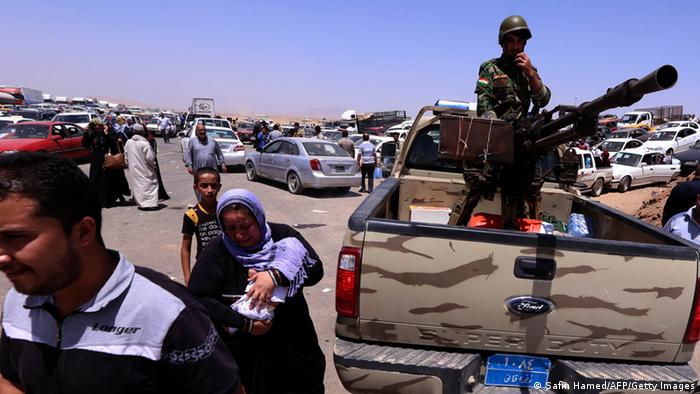 Prime Minister Nouri al-Maliki made the call in a nationally televised news conference on Tuesday after militants seized control of most of Iraq's second-largest city, Mosul.

Acknowledging that militants seized "vital areas in Mosul" he said the public and government must unite "to confront this vicious attack, which will spare no Iraqi."

He also said his Cabinet had "created a special crisis cell to follow up on the process of volunteering and equipping and arming," civilians who volunteer to fight against militants in the city.

The militants launched an overnight attack fighting with police and combat troops, taking control of the governor's headquarters, television stations and prisons, where they freed detainees. The gunmen also torched several police stations in the city, located 360 kilometers (220 miles) north of Baghdad.

The militants are believed to be affiliated with the Islamic State of Iraq and the Levant (ISIL), an al Qaeda splinter group that has been behind many of the attacks in Iraq within the past year.

Mosul is the capital of Nineveh province. Militants have launched major operations there and in four other provinces in recent days. The latest violence has killed scores of people and highlighted the Iraqi government's inability to curb the growing insurgency.

Mosul is the second city to fall to militants this year, after the government lost control of Fallujah, near Baghdad, in early January. ISIL and their allies remain in control of that city, as well as other parts of Anbar province, which neighbors Nineveh.

Meanwhile, 28 Turkish truck drivers were reportedly kidnapped by militants in Mosul. Turkish media reported that the drivers were being held hostage after being captured while transporting diesel fuel from Turkey's southern port of Iskenderun to a power plant in Mosul.

A senior Turkish official told the Reuters news agency that the government was investigating the report.