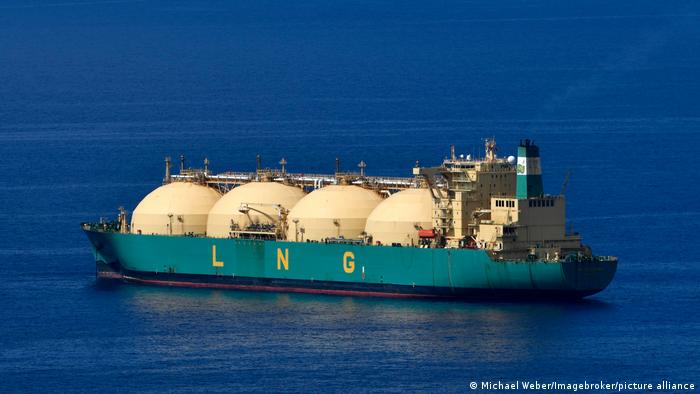 More LNG gas is set to be shipped into Europe. But at what climate cost?

"We think that we can switch to another vehicle, but we are still driving towards the abyss," said Andy Gheorghiu, a Germany-based anti-gas and -fracking campaigner, after US President Joe Biden and EU head Ursula von der Leyen announced a gas deal to reduce the European Union's dependence on Russian energy.

An extra 15 billion cubic meters of liquefied natural gas (LNG) — sourced largely from hydraulic fracking wells that have mushroomed across the United States — will now land on Europe's shores from across the Atlantic this year.

This is only about one-third of the gas that Germany alone piped in from Russia in 2022. But activists fear that substituting Russian gas with LNG will not only fail to ensure energy security; it will also threaten longer-term climate goals.

"[This] agreement puts the EU and the US on a misguided and dangerous path by fast-tracking new infrastructure to import fossil gas into Europe," said Murray Worthy, gas campaign leader at the environment NGO Global Witness. "Building new import terminals would mean locking in fossil gas imports for years to come, long after the EU needs to quit this climate-wrecking fuel for good."

Concerns are also growing about the immediate climate impacts of LNG fracked from shale deposits deep under the ground.

Though fracking is banned across much of Europe due to its environmental impact, including the use of chemicals that contaminate groundwater, the EU has been happy to source fracked gas from the US.

For campaigners, the push to ramp up "freedom gas" has severe climate implications because of LNG's high methane emissions.

Noting that methane's global heating impacts are about 85 times higher than CO2 over a 20-year period, Gheorghiu said little had been done to tackle the diverse sources of "supply-side" methane leaks on both sides of the Atlantic.

Nonetheless, the US-EU agreement announced on Thursday was careful to couple the goal of diversifying gas supplies with "climate objectives."

The deal aims to "reduce the greenhouse gas intensity of all new LNG infrastructure and associated pipelines, including through using clean energy to power onsite operations, reducing methane leakage, and building clean and renewable hydrogen-ready infrastructure."

Yet, if Russian gas is simply to be replaced in the short-to-medium term, natural gas is likely to retain its mantle as  the second-largest source of CO2 emissions after coal in the European Union.

Meanwhile, across the Atlantic, Gheorghiu said, inconsistent regulations have made some US states a "wild west" for the fracking industry.

In Texas, for example, high emissions from so-called methane flaring often go unregulated, allowing leakage from the tens of thousands of wells in the Permian Basin, which stretches into New Mexico — its gas reserves have been labeled "some of the dirtiest in the world."

Indeed, a 2019 study attributed a decade of growth in global atmospheric methane emissions to the fracking boom in the United States. It concluded that shale-gas production in North America may be responsible for "over half of all of the increased emissions from fossil fuels globally" in the previous decade.

The European Union's imported LNG is also being used as a feedstock for plastics and fertilizers, Gheorghi said. With import contracts often locked in for up to 20 years, such fossil fuel availability will be a disincentive to decarbonize these high emission raw material sectors, the campaigner said.

Researchers Amanda Levin and Christina Swanson, from the US-based Natural Resources Defense Council, have concluded that US attempts to ramp up LNG production and exports could scupper any chance of limiting global heating to 1.5 degrees Celsius (2.7 F).

They describe the "rapidly expanding" export of LNG as a "bridge" to the clean-energy transition — gas emissions are about 50% lower than coal — will "lock in fossil fuel dependence, making the transition to actual low-carbon and no-carbon energy even more difficult."

The climate impact of LNG will double when extraction, transport, liquefaction and re-gasification are added to the greenhouse gas (GHG) emissions of gas burning, the researchers note.

The 130 to 213 million metric tons (143-235 short tons) of new GHG emissions in the US generated by a tripling of exports between 2020 and 2030 will be like putting up to 45 million more fossil fuel-powered cars on the road annually — it will also reverse the 1% annual GHG decline achieved in the past decade, according to the authors.

Russian gas boycott 'would cause a lot of pain' for Germany: DW's Melinda Crane

Though German Economy Minister Robert Habeck has also been in Qatar and the United Arab Emirates this month trying to find more gas alternatives, analysts say limited supply and soaring global demand make it difficult to massively increase the LNG flow to Europe.

Meanwhile, necessary infrastructure such as terminals will take two to three years to construct, making the European Union's goal of cutting Russian gas imports by two-thirds by year's end unlikely.

For climate campaigners, fossil fuel energy is a key driver of war and needs to be phased out and replaced by renewable energy.

"More investment and reliance on fossil fuels is music to the ears of despots and warmongers all over the world who recognize this is an energy system that benefits them," said Global Witness' Murray Worthy. "If Europe truly wants to get off Russian gas, the only real option it has is phasing out gas altogether."

"We have the unique historical chance and obligation to choose now for a radical shift of the way we generate and consume energy," Gheorghiu said. "But the solution our trans-Atlantic governments presented was nothing but business as usual."