Germany has vowed to wean itself off Russian gas imports in the wake of the invasion of Ukraine. Economy Minister Robert Habeck is visiting Qatar, one of the world's largest exporters of liquified natural gas (LNG). 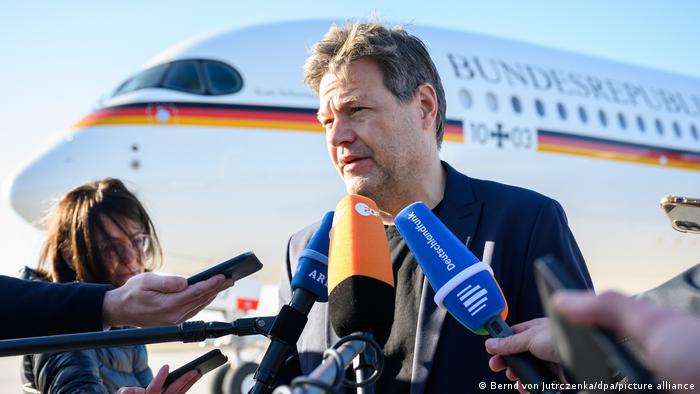 German Economy Minister Robert Habeck flew to Doha on Saturday as part of efforts to help Germany diversify from Russian gas imports in light of the Ukraine war.

The visit to Qatar, a major supplier of liquified natural gas (LNG), follows Habeck's trip this week to Norway, another gas exporter.

Germany's search for alternative gas sources comes in the wake of Russia's invasion of Ukraine and the severing of major economic ties with Moscow, including the suspension of approval for the Nord Stream 2 pipeline, which was set to add to Germany's Russian gas supply.

What is Habeck's itinerary?

The German minister will be accompanied by a high-ranking business delegation and top of the agenda will be how to secure LNG supplies.

Berlin plans to bring LNG onboard ships into the country. But there are no terminals to receive them because of the legacy dependency on pipeline gas.

German Chancellor Olaf Scholz announced plans to build two new LNG terminals but they are unlikely to be ready before 2026.

Habeck's trip then moves on to the United Arab Emirates (UAE), which is repositioning itself as a hub for green hydrogen.

The UAE could help Germany meet its longer-term goal to switch to cleaner energy sources.

Gas supplies 'not yet completely secured'

Before his departure, Habeck said the government was prioritizing energy security for next winter, telling Deutschlandfunk radio that gas supplies to Germany are "not yet completely secured."

"If we don't receive further gas supplies next winter, and the deliveries from Russia are capped or stopped, we wouldn't have enough to keep all our houses warm and to keep all our industry running," he said.

The minister warned that entire supply chains might break down if certain sectors, such as the chemical industry or steel mills, could no longer produce.

Half of Russian gas 'can be replaced easily'

Germany could replace around half of its natural gas imports from Russia this year in the event of a delivery stoppage, energy industry association BDEW said Friday.

It added Russia's share of Germany's gas supply in January-March, which is not officially published, stood at 40%, rather than earlier estimates of 56%.

But BDEW warned that without Russian exports, a target to fill Germany's underground gas storage capacity of 24 billion cubic meters to the brim by the beginning of next winter would become questionable.