The Facebook ads Russian agents bought during the US election

A congressional committee has released a trove of Russian-funded Facebook ads that were disseminated during the 2016 presidential election. DW looks at the politically divisive messages aimed at sowing discord in the US. 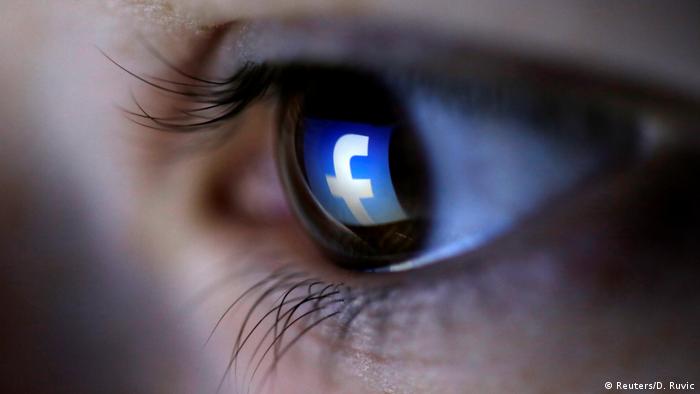 Following two days of testimony by lawyers from Facebook, Twitter Inc and Alphabet Inc's Google, the House Intelligence Committee made public a sampling of the ads under scrutiny.

Facebook has handed over some 3,000 examples to Congress, which they have identified as purchased by Russian entities. The internet giant believes that over 120 million Americans were exposed to disinformation created and by the St. Petersburg-based Internet Research Agency.

Facebook company Instagram believes that at four million people were affected on its platform starting in October 16.

The hearing comes as part of a wider investigation into suspected Kremlin interference in the 2016 presidential elections led by special counsel Robert Mueller.

Congressional lawmakers sharply criticized executives of the three internet giants this week for failing to stop the manipulation of their respective platforms. Senator Al Franken blasted their blindness to the money trail leading back to Russia.

"Google has all the knowledge that man has ever developed," the Minnesota Democrat said. "You can't put together rubles with a political ad and go like, 'Hmm, those data points spell out something pretty bad?'" 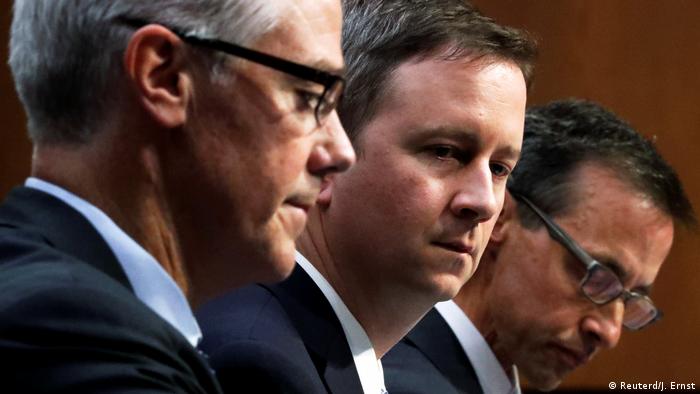 Some Republicans on the Senate Intelligence Committee have argued that the combined $81 million (69 million euros) spent on Facebook ads by Donald Trump and Hillary Clinton's respective campaigns far eclipses the influence of Russian-bought ads, which amount to an estimated $46,000.

Nevertheless, concerns on the Senate Intelligence Committee remain high. Facebook has vowed to hire 1,000 people worldwide to ensure better monitoring, in addition to requiring businesses or organizations to submit proof of their existence.

Apple CEO Tim Cook weighed into the debate on Wednesday evening in an interview with US broadcaster NBC. The problem with ads is negligible in comparison with the larger problem "that some of these tools are used to divide people, to manipulate people, to get fake news to people in broad numbers, and so, to influence their thinking," he said.

The sample of ads released on Wednesday featured an array of controversial pictures aimed at agitating specific demographics of the population, both on the left and the right.

This fake account called "Army of Jesus" played on a deep distrust of Clinton among Republican voters, specifically white Evangelicals. It cost 64 rubles, or about $1.10, and was posted less a month before the election. 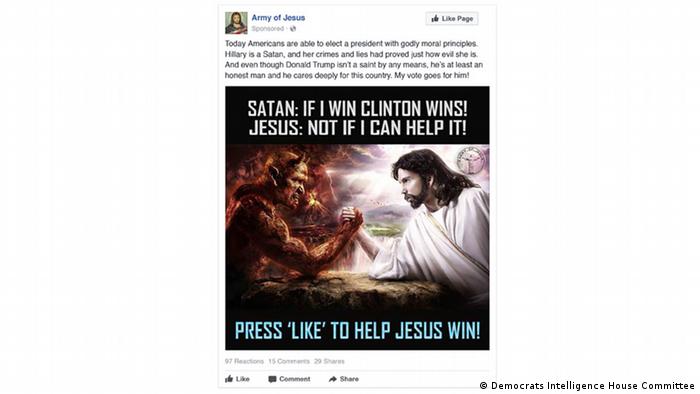 For Americans, Texas is a big oil state that is known for boasting its uniqueness and for threatening secession. This ad plays on growing disillusion in US politics and the press, spun into a Texas "nationalist" narrative. 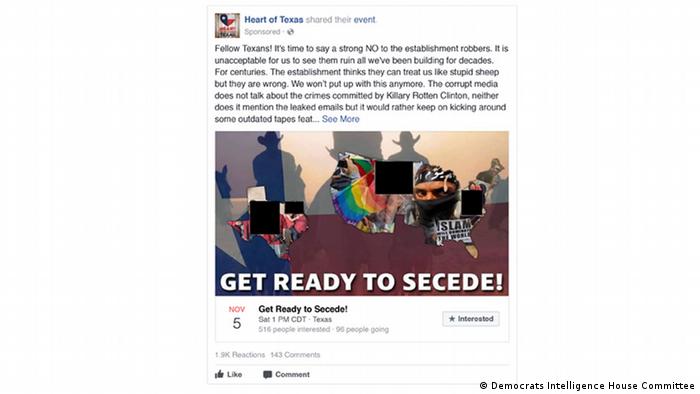 One of the most contentious issues in the US is gun control. The Republican party is an enthusiastic supporter of the National Rifle Association, a powerful gun lobby group. This ad was viewed over 160,000 times and cost 9,971 rubles, or $171. 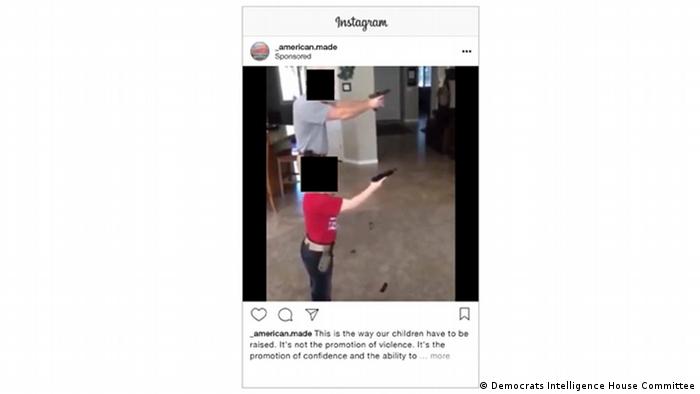 Previous Democrat opposition to US troop deployment has falsely earned the party the reputation of being anti-military. This ad, which cost 3,084 rubles, or $53, was posted in August 2016. It was viewed over 17,000 times. 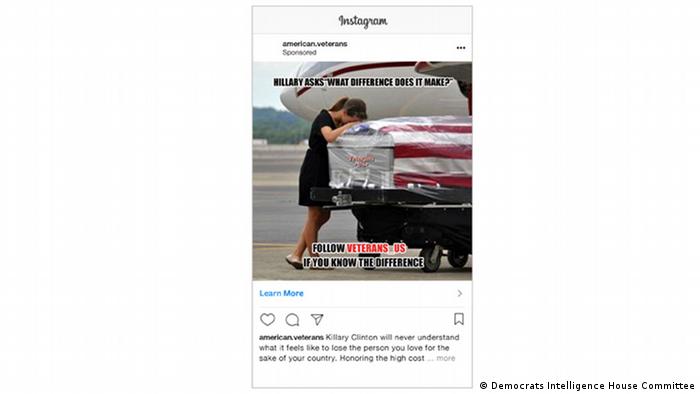 Blasting former President Bill Clinton was also a tactic used by the Russian buyers in this ad, which ran less than a month before the election. 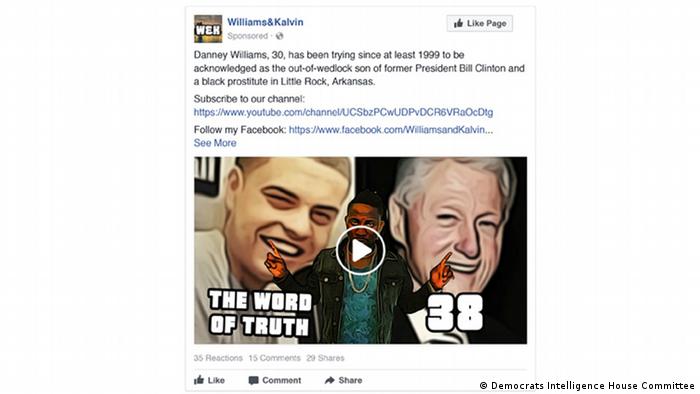 For 3,137 rubles, or $54, the campaign of disinformation also sought to discredit Democratic presidential primary candidate Bernie Sanders as a Muslim sympathizer. The stunt targets voters who fear that allowing Muslim immigration will result in Islamist terror attacks on US soil. 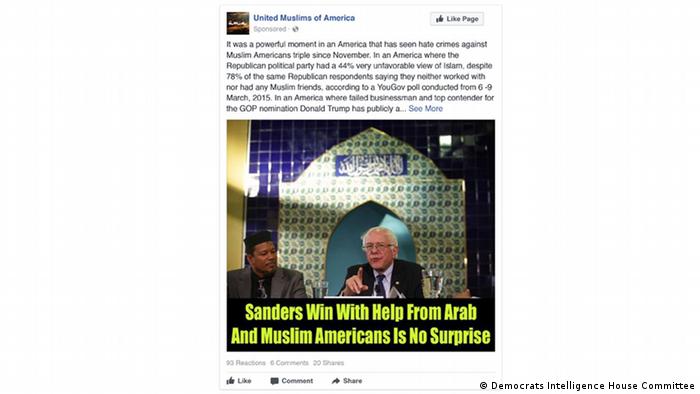 However, Facebook also uncovered posts that pointed to an attempt to anger voters on the left. 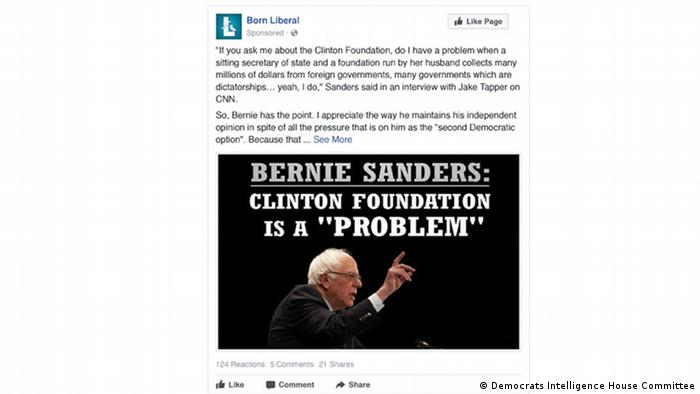 Even appealing to anti-Trump supporters the day after he won. 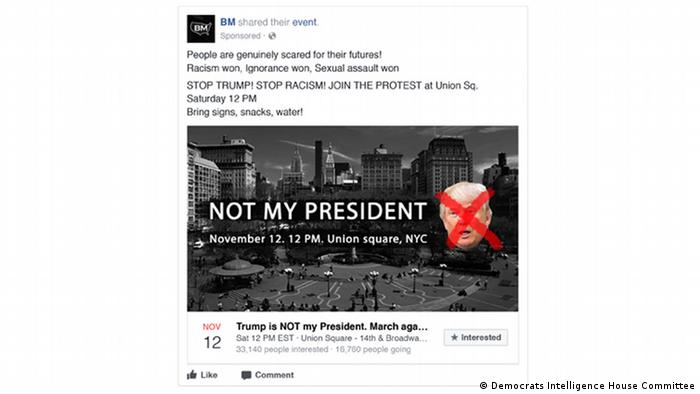