The end of the Merkel-Macron era — a mediocre legacy?

German Chancellor Merkel has met with French President Macron in what could be her final working visit to France. Some analysts say their cooperation should have produced more results. 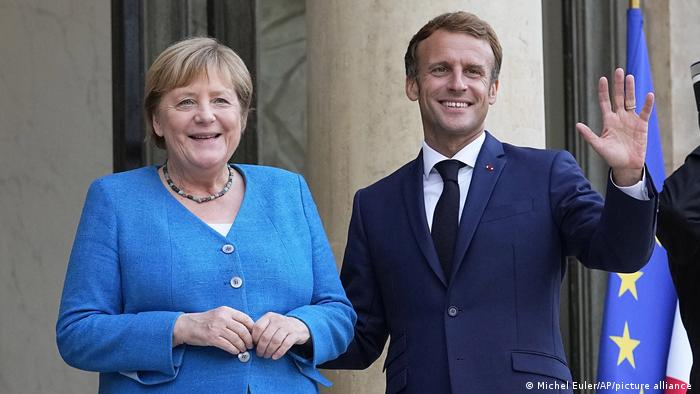 The latter came towards her and, with large smiles behind their face masks, both did a fist bump while patting each other on the arm.

Standing in front of a crowd of journalists, they then announced the night's topics: Afghanistan, climate, European cooperation.

"We will continue to work closely together over the coming months‚" Macron said.

Just like at roughly two dozen other occasions over the past five years, the pair walked up the stairs, turned around for a last smile at the cameras and vanished through the glass doors.

The affectionate scene symbolized the end of a chapter of Franco-German cooperation.

Merkel will, after 16 years in power, will not run in Germany's upcoming general elections on September 26, and France's next presidential elections are scheduled for April 2022.

So what will be the power couple's legacy?

Their relationship has had its rocky patches — even though it began under a very good star, opines researcher Paul Maurice from the Research Committee for Franco-German Relations (CERFA) at the Paris-based French Institute for International Relations. 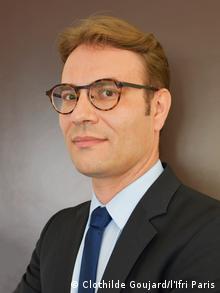 "Macron's election in May 2017 triggered outright enthusiasm. He was seen as a liberal, pro-European and reformist candidate promising budgetary and financial reforms," Maurice told DW.

Ronja Kempin, senior fellow at Berlin-based think tank German Institute for International and Security Affairs, added that hopes were then high Macron would be a stronger figure than his predecessor.

"The 40-year-old was expected to be more of an equal partner than socialist Francois Hollande, perceived as too weak to make tough decisions," she said.

However, the honeymoon between Macron and Merkel only lasted a few months.

In September 2017, Macron held a speech at the Sorbonne University in Paris pledging greater European integration.

The French leader pushed, amongst other things, for a eurozone budget with its own finance minister, common European taxes, an EU-wide minimum wage and a proper European defense policy.

Across the border, there was only silence

But across the border in Germany, the applause failed to materialize.

For almost a year, there was only silence.

That was partly down to timing: The Germans were first in the middle of general elections, then in the process of forming a government.

It was also the result of ideological differences — Berlin is opposed to wide-ranging financial European integration and a multi-speed Europe, also promoted by Macron.

"But even so, the Germans should have reacted earlier and shown at least some enthusiasm," Helene Miard-Delacroix, professor for contemporary German history and civilization at the Sorbonne, told DW.

"Macron was really disappointed by the lack of response and Merkel missed the opportunity to form a stronger bond with France," she added. 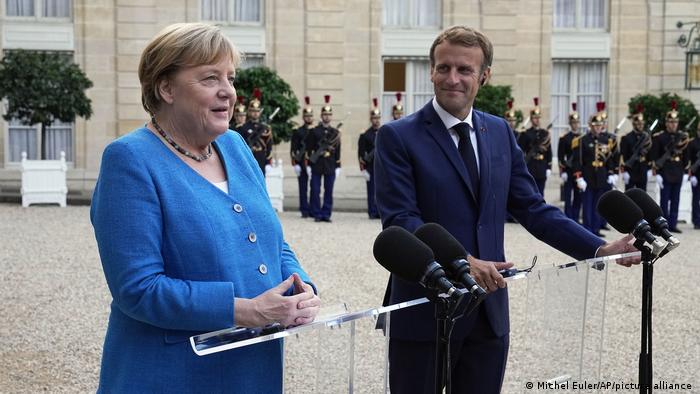 The Germans were disappointed, too

Meanwhile, there was disappointment on the German side, too — when reformer Macron didn't manage to push through all the reforms he had promised. He was hindered, amongst other things, by the so-called yellow vest protesters that demonstrated for more social justice for months.

An unemployment benefit reform has been pushed back to October. Additionally, a long-awaited pension reform still hasn't been implemented — and it's unclear if it will be before France's upcoming elections.

"Merkel participated in the French ceremony for the centenary of the end of World War II in November 2018 — that was a strong symbolic gesture," he remembered.

"And both countries signed the Treaty of Aix-la-Chapelle in July 2019, through which they pledged to deepen their economic, political and technological cooperation," he added.

A sweet reunion in the middle of the COVID-19 crisis

But the proper sweet reunion only occurred in the summer of 2020. The unprecedented COVID-19 crisis had both countries agree on a €750bn ($882bn) EU recovery package. For the first time in history, the EU Commission had the right to borrow money on the markets to finance the plan in the name of EU members.

By agreeing to this, Germany, traditionally attached to financial discipline, edged closer to the more fiscally lax France.

"Ever since, both countries have been on a positive wave of their relationship – it's been like a revival," Maurice said.

She gives the power couple a mediocre mark.

"The last five years have shown that even if things don't progress in Europe without German-Franco cooperation, that doesn't mean they do when there is cooperation," Pornschlegel told DW. 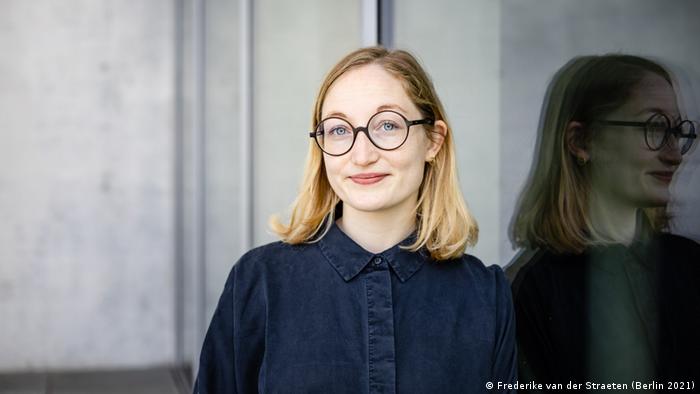 "The two countries will hardly be able to agree on a common defense policy — France is much more belligerent than Germany," the expert explained.

"And so the EU doesn't have a foreign policy — apart from providing development aid," she added. "But they should have come up with other common strategies regarding trade and technology — for example by jointly taxing big tech companies — to shape the EU's international profile," Pornschlegel said.

"Right now, cooperation in these areas is tricky, as both countries are too self-absorbed," she continued.

Merkel's experience 'will be missed'

And yet, expert Paul Maurice thinks people will miss the power couple. Especially Merkel, as Macron is for now predicted to win the upcoming elections.

"If the new German government included the Liberals [FDP] or the Greens, Franco-German cooperation could become much harder," the researcher underlined.

"The Liberals [FDP] might push even more for budget discipline and the Greens oppose nuclear energy — France's main energy source — and are strict pacifists," he added.

Pornschlegel added that Merkel's long-standing experience will be missed. "She just knew everybody and how to deal with cultural differences in Europe. Without that knowledge, negotiations will become a lot harder," she opined.

"We should trust those that will be taking over," she said. "Politicians on both sides know that they need to cooperate in order to achieve anything in Europe."