The French government has vowed to stiffen penalties for attacks on police after two recent killings. Police complain that courts are too soft on criminals, and critics say aggressive tactics diminish public confidence. 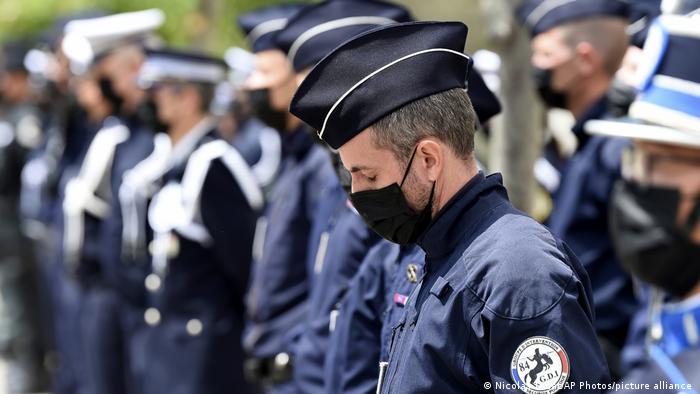 Speaking at the funeral of Police Officer Eric Masson on Tuesday in the southern city of Avignon, French Prime Minister Jean Castex vowed that France would not back down in its fight against drug dealers.

Masson, a 36-year-old father of two, was shot to death in broad daylight last Wednesday during a routine check at a street corner known to be frequented by drug dealers in Avignon's historic city center.

Masson was posthumously named Chevalier, or knight, of the Legion of Honor, France's highest award. Castex tweeted that "no one will forget his name and courage."

Police in France have increasingly become the target of attacks of late, often by heavily armed drug dealers.

Authorities have said that violent attacks by miscreant youths have also exploded in recent months. Thierry Clair, deputy director of the UNSA police union told the Associated Press that  violence against police has doubled in 20 years.

Masson's was the second national memorial in almost as many weeks, following another for a female police employee who was stabbed to death in the entrance hall of the Rambouillet police station southwest of Paris by a Tunisian Islamist extremist on April 23.

How is France responding to police killings?

This weekend, French President Emmanuel Macron said: "It's a reality that there is violence in our society and it's swelling each day. And the role of our police is made more difficult by this violence."

Macron, who is expected to run for re-election next year, has made policing a priority. He has promised to put 10,000 more officers on the street before the end of his term in order to "eradicate" drug dealers. He has also increased police budgets.

Prime Minister Castex, meeting with police unions on Monday, presented a series of steps to protect police from attack.

This would include €10 million ($12 million) in funding to enhance security at France's police stations, as well as revamping sentencing rules to ensure that courts crack down on anyone disrespecting police, and hand down mandatory 30-year prison sentences to anyone found guilty of killing a cop.

Castex tweeted Tuesday that violence against France's internal security forces will be a "specific offence" that is "more severely punished."

French police have routinely complained that the country's courts are far too soft on criminals, often failing to convict those arrested.

However, critics of expanded police powers in France fear that freedom of speech and assembly could be put at risk by new proposed security laws.

Some experts also say the trend of violent attacks against officers was higher in the past, and that aggressive police tactics have damaged public confidence.

Sebastian Roche, a sociologist at the French National Center for Scientific Research (CNRS) in Paris, told the Associated Press that in recent years an average of roughly 10 officers have been killed in the line of duty annually, compared with 30 per year in the 1980s.

Roche said that over the course of the past 20 years, police tactics have become more aggressive, especially in suburban housing projects.

He also noted that the image of police was greatly tarnished in the broader public's eye as a result of heavy handed tactics employed in containing the tumultuous marches and actions of the so-called yellow vest protests of 2018.

Nongovernmental organizations in France have launched a class-action lawsuit against the government for alleged systemic discrimination by police carrying out ID checks.

Thousands of "yellow vest" protesters in Paris have taken part in a "march of the injured." It comes after a court threw out a case calling for a ban on rubber bullets.