India is among a handful of countries maintaining long-term, close ties with Pyongyang despite the Kim regime's nuclear belligerence. What does New Delhi want to achieve through this engagement? 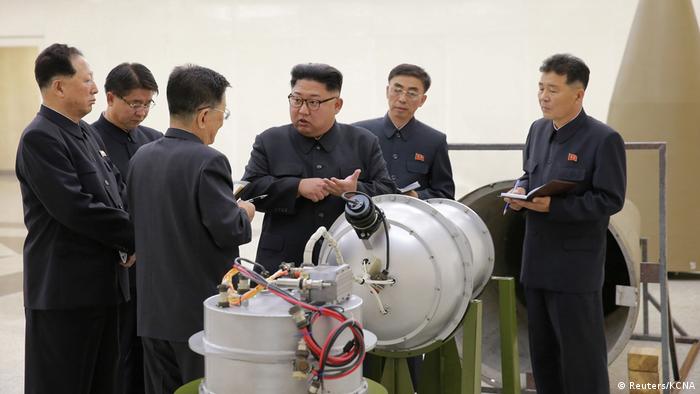 It was the first visit by a senior Indian official to North Korea in 20 years, although the two countries have maintained backchannel diplomatic communication for decades.

Political observers and international relations experts say that Singh's North Korea visit was not a random diplomatic outreach to the communist country but a part of New Delhi's ongoing efforts to retain a working relationship with the reclusive nation.

Singh's two-day visit was also a symbolic commemoration of the 45-year-long diplomatic relations between India and North Korea.

India comes right after China as North Korea's second-biggest trade partner among all other countries who maintain trade relations with the communist state. India makes up about 3.5 percent ($97 million, €83 million) of North Korea's exports and 3.1 percent ($97 million) of its imports, according to the Massachusetts Institute of Technology's Observatory of Economic Complexity.

"India-North Korea ties are a legacy from India's non-aligned status during the Cold War," Abhijnan Rej, a research fellow at the New Delhi-based think-tank Observer Research Foundation, told DW. "After the end of the Cold War, India did not hesitate to engage with countries the West deemed 'problematic,' including North Korea," Rej added.

Tensions have spiked on the Korean Peninsula in the past few years, with North Korean leader Kim Jong-un's regime threatening the stability of the region with nuclear and ballistic missile tests.

But does India have the clout to mediate between North Korea and the West?

"It is unclear what role India can play to bring Pyongyang closer to the international community. I think India considers the possibility of a real thaw between the US and North Korea an opportunity to engage with Pyongyang for the sake of its own interests," Rej said, referring to the efforts by Washington and Pyongyang to organize talks between US President Donald Trump and North Korean leader Kim in Singapore.

The Indian government believes it should increase its engagement with North Korea should the international sanctions begin to ease.

In 2004, the "founder" of Pakistan's nuclear bomb A Q Khan confessed to selling nuclear technology to North Korea and Iran.

Without naming any country, North Korea assured the touring Indian minister that "as a friendly country DPRK [the Democratic People's Republic of Korea] will never allow any action that would create concerns for India's security," according to a press statement.

Jagannath Panda, a North Korea expert associated with the Institute for Defense Studies and Analyses, told DW that India is the only country that has been demanding the denuclearization of the Korean Peninsula since the 1990s. The country has also been raising concerns about the nuclear proliferation network that Pakistan and North Korea are allegedly part of.

"India's choices are limited in the region. It is not a permanent member of UN Security Council, it is not a part of the six-party Korea dialogue, and none of the stakeholders in the Korean conflict – South Korea, China, Japan and the US – are interested in New Delhi's role," Panda said.

But analyst Rej said that Singh's North Korea visit was a signal from India to the international community that it is a major stakeholder in the Asian security architecture and that it will not sit on the sidelines of major world events.